Technology hasn’t yet provided a way to replenish the water level in the Ogallala aquifer, but it’s certainly  coming up with ways to slow its decline. Much of that improvement has come from new application techniques that reduce water lost to run off and evaporation. Groundwater experts believe that if growers invest the time and money to adopt them, the aquifer can be extended by a generation—or perhaps stabilized for even longer.

Drip irrigation — in both its mobile and subsurface forms — is among those ideas. B0th use small emitters in plastic lines, either drug on the surface by a center-pivot (MDI) or buried under ground (SDI).

Hugoton, Kansas farmer Joel McClure slowed the declining capacity of one of his wells by converting a pivot system to mobile drip.

“It’s allowed us to cut as much hay from a 400 gallon per minute well as we could with conventional nozzles on a 650 gallon well,” says McClure. “It also pays off because we can irrigate a full circle rather than splitting one.”

Kansas State University irrigation engineer Jonathan Aguilar says MDI saves water by reducing the losses to evaporation and drift that occur with conventional center-pivots. “Roughly 17% of the water applied by above-canopy nozzles is lost as it falls through the air or is exposed on the crop canopy or soil surface. An MDI system releases water below the canopy, so only the wet soil surface is subject to evaporation and it looks like that’s cut by 35%.”

Lee Wheeler, an ag engineering consultant from Hesston, Kansas, says he believes the MDI approach can reduce water use by 20% without a yield loss. He and Aguilar are working with the Water Technology Farms established by the Kansas Water Office, Kansas State University and others to demonstrate the benefits of new irrigation technology. Dwane Roth was one of the first to enroll his Holcomb, Kansas, farm in the project and says it’s convinced him that there is hope for agriculture’s future on the High Plains. 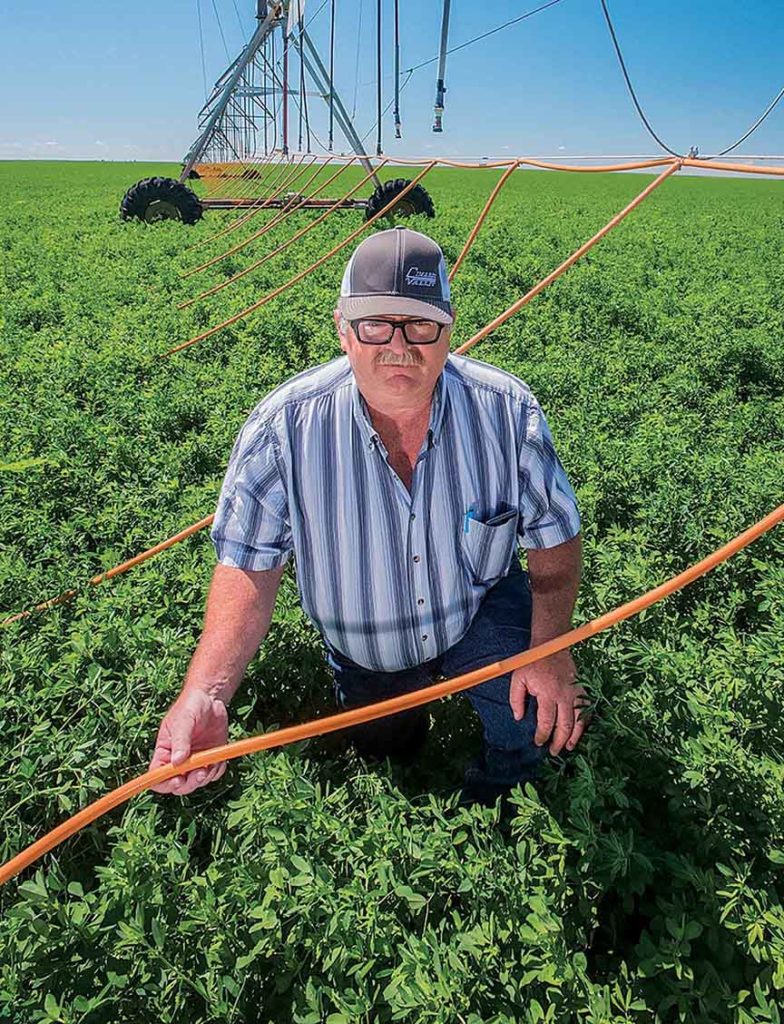 Joel McClure replaced spray nozzles on his center-pivot with the water-emitting tubes of a Dragon-Line system to make the most of a low-yielding well.

“Farmers have been slow to adopt new irrigation technology—less than 10% have—but they’ve rushed to adopt other precision ag technology,” says Roth. “I was guilty of that myself, but now I believe these  ideas can have a significant impact by increasing the life of the aquifer.”

Roth is comparing new technologies in side-by-side spans of one center-pivot. “We’re using  30-inch and 60-inch spacings of the MDI tubing along with two new types of low pressure nozzles that run close to the surface. The MDI approach saves more water, but is more expensive— $20,000 to convert a pivot in good condition and twice that for one that needs a new undersling. That’s twice the cost of updating with the new nozzles in those scenarios,” says Roth.

The buried drip lines of SDI systems offer the ultimate water savings, but carry a hefty $1,700 per acre price tag. However, researchers are finding this cost is tempered by yield benefits that result from injecting crop nutrients directly into the root zone.