Before the dust and sweat-decorated brim of Dana Kerns’ trail-worn cowboy hat there are no fewer than three people who have unconsciously meandered their mounts from the back of the 250 cows they’re driving well into the middle of the herd. This would earn high-volume reprimands from most ranchers, but the fifth-generation Wyoming cattleman doesn’t raise a fuss. These cowboys are fresh to the job and his policy is to maintain a soft touch as they learn the ropes.

“This business isn’t for everyone,” Kerns says of the cattle drive his family has run for more than a quarter century. “You’re taking what’s already a hard job and making it even more work and not everyone has the patience to work with people.”

The drive itself isn’t for everyone, either. There are no posh accommodations or leisurely trail riding on Double Rafter Ranch cattle drives. There’s a job to be done and it’s no easy task.

The Kerns family runs six roughly week-long drives throughout the year that move their cattle from their home ranch at Parkman, Wyoming, high into the Big Horn mountains to their 63,000-acre national forest grazing permits held since 1890. Their family was the first to try grazing the unproven, harsh country. 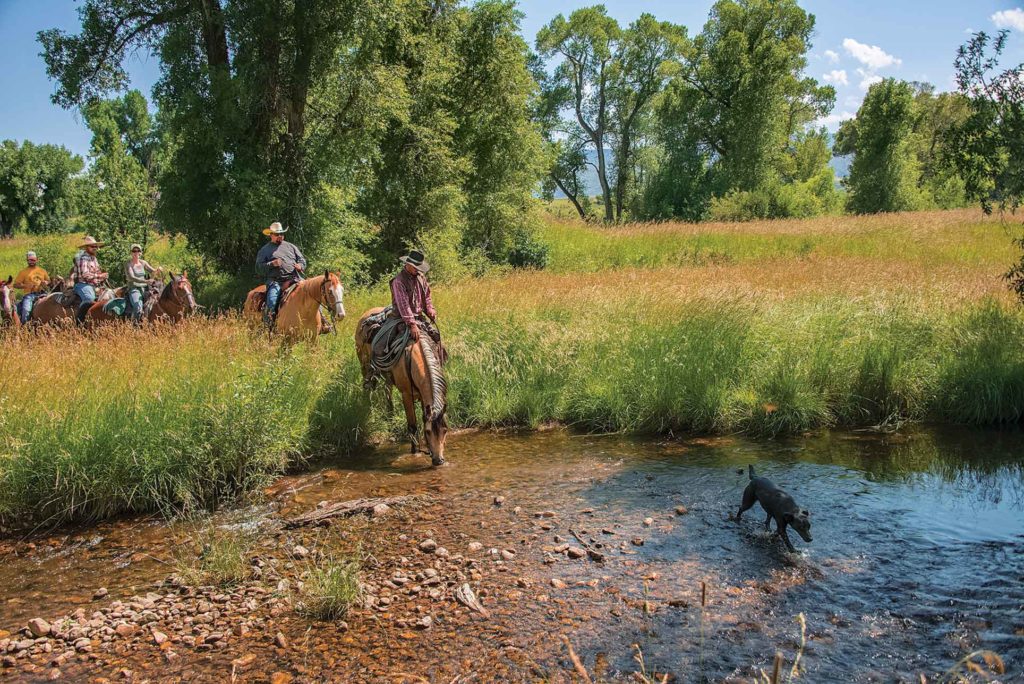 Days start well before dawn as riders saddle their own horses and tackle terrain from easy gravel roads at the start to stream crossings, canyons, bogs and trees as they ascend with the herd to summer pastures.

Two drives move the cattle up, two drives are spent moving pastures and two are needed to gather and move the cows home. Saddle miles logged on each trip add up to 50 or more through rough country where cliffs, bogs, rain, snow, mosquitoes and apex predators only add to the wild experience.

Moving the cattle is a daunting job, one the Kerns have undertaken for more than 100 years, only adding guests in the last 27. The grazing allotment is just as intimidating today as it was a century ago.

“Here in the valley I can jump in my Gator [ATV] and see 90 percent of my cows in about 2 hours,” Kerns says. “In the mountains I could ride for 4 straight days and never see more than 60 percent of them. It’s a major undertaking just to get them gathered and moved to the next pasture.”

Recreation and ranching. Dana, his wife, Alice, and their three sons now count the cattle drive as
the main revenue driver for the ranch and more.

“I’m 62 and still have a passion for what I do and so do my boys,” Kerns says of ranching and hosting cattle drives. Their children, Brendon, Trent and Taylor grew up on the trail with guests. Taylor even met his wife, Cathryn, on one of the drives.

“My children have really benefited from the cattle drive. They’ve learned to talk to anyone, anywhere, and they understand they are truly blessed by the life they have,” says Alice, who keeps the bellies of 40 or more cowboys full on the trail each trip. “It’s also made them very responsible. Taylor was just 9 the first time he was in charge of a group of guests.”

Adventures in hospitality. The idea of the drives, or “recreational ranching,” came home from college with Kerns’ youngest brother. They had long had others tag along on the trip and figured it could work. 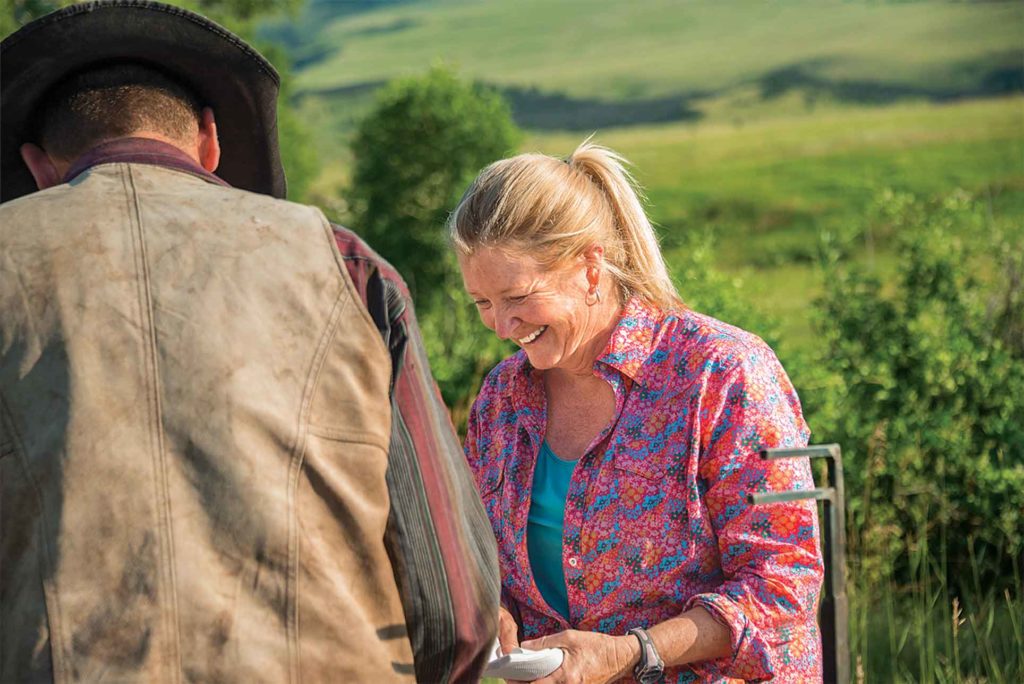 Alice just after ringing the triangle calling everyone to dinner — the flank steak her partner is carving.

“The ranch was struggling financially. This was the 70s when there was 16-18 percent money at the bank and ranches were going down the tubes fast. We loved ranching and people, so it seemed like a good fit,” Kerns says. Though they have proven profitable, the drives are no small undertaking.

Luxury is in short supply on this trip. There is no posh lodge to return to at the end of the day. Instead there are teepees and wall tents that a rider may or may not see before dark. With 15 hours of daylight in summer, that can mean a long day in the saddle.

The main comfort they can offer is Alice’s chuckwagon cooking. The charcoal-covered lids of her cast iron Dutch ovens lift to reveal hearty meals, moist delicious cakes and more to weary and hungry guests.

“Anything you can bake in a 350-degree oven you can bake in a Dutch oven, except pastries because they get soggy,” Alice says. She recounts the challenge of learning to cook for 40 people with no electricity, no running water and packing it all along.

“We used to use pack animals, now we use ATVs to move the food. It was really intense. Upsetting packs in a canyon can be scary and I was followed by a mountain lion and bears. I far prefer bringing supplies down to the camps from the top,” she says.

In addition to wildlife, Alice has had to deal with cooking with fire in rain and snow. Cathryn has urged her to put together a cookbook complete with her tips for the combined challenges of cooking and weather.

Meanwhile, on the trail, Dana, Trent, Taylor, Cathryn and a dozen or so wranglers navigate the trail and guests. The only thing certain is the unexpected happening. “We’ve become very good at plan B, C and D because we continually have things that happen,” Dana says…from the simple, such as broken gear, to bears ransacking coolers leaving them high in the mountains with few supplies, horses going down in bogs, and drives stretching into the night resulting in headlamp-led rides down cliff-edged terrain. Guests get a real adventure with the Kerns.

“Because our trip is very unique, we get a very similar type of person from a personality standpoint.  Most are entrepreneurs that understand risk and understand that things don’t alway go as planned.  They’re very willing to roll with the flow,” Dana says. “We’re not getting someone who says, ‘I”ll take my martini over there under the tree,’ because it ain’t going to happen.” 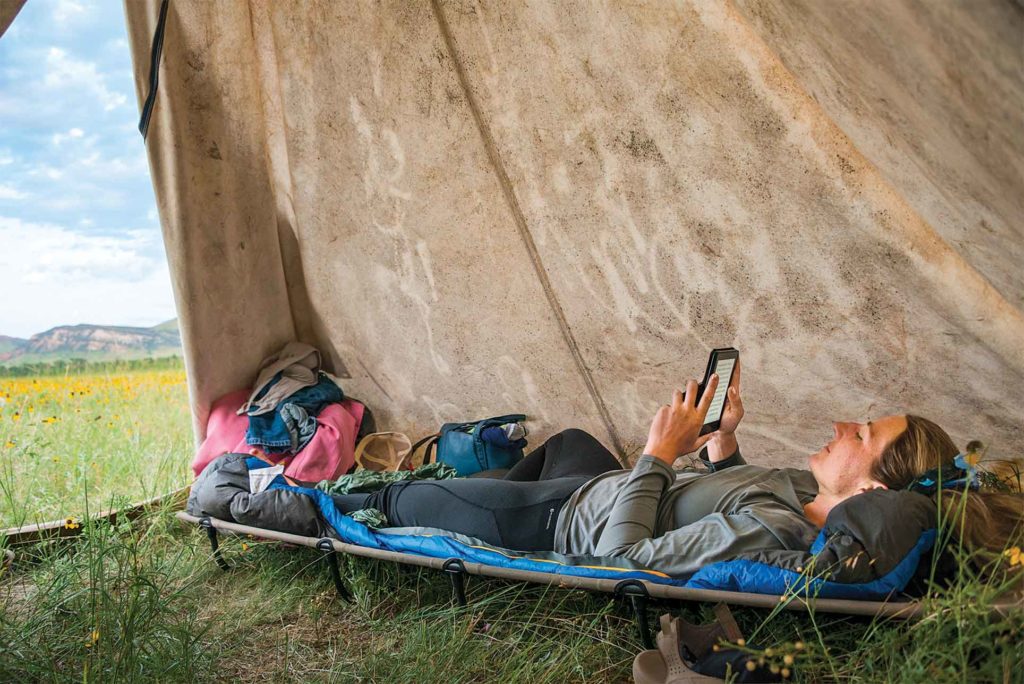 Danielle Doth, a veteran from Kentucky rests her sore muscles in her wildflower-surrounded tee pee before dinner.

What guests will get is a crash course in horsemanship, livestock handling, backcountry survival skills and a bond with the crew and fellow guests that will endure long after they’ve left the mountain.

Drive with a mission. While every drive is an adventure, the Kerns look forward to one in particular each year. In July, a group of post-9/11 veterans selected and sponsored by the Semper Fi Fund make the trek to Wyoming to try their hand at being cowboys.

The feel is a bit different from the average vacationing guests. The retired Air force, Marine Corp, Army, Navy and Coast Guard veterans fall into stride quickly due to their shared combat experiences. Bonds are quickly forged as they become a new team facing down the challenging new mission laid before them.

On Day 1 they go through their horsemanship clinic and get paired up with a mount for the week. After some practice, they ride to their starting point for the next morning and head back to camp where Dana lines out the next day, which starts at 3:30 a.m.

After a very brief night, riders make their own lunches of peanut butter and jelly sandwiches by
the dim yellow glow of lanterns. Stars still twinkling overhead, they head out to saddle their horses.

The day starts with challenges as some — old injuries stiffened by their short ride the day before —struggle to mount their horses. There is embarrassment. Frustration. But with help and encouragement from their team all are mounted and head out to the lush green foothill pastures to gather the herd. 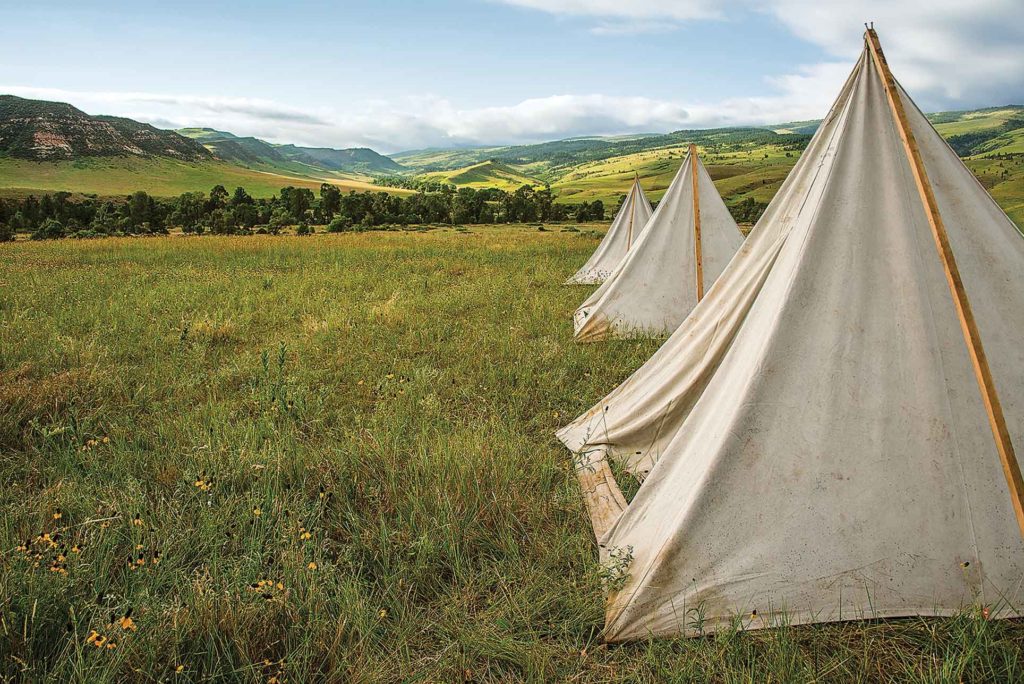 Tee pees and cots provide shelter for the short nights guest spend on the trail.

The mood is jovial early. Melissa Schmalhorst, a former Air Force explosives dog handler and working dog trainer took great joy in watching the cattle dogs work. “It’s so great to see a dog in their realm, using their natural instinct,” she says. “There’s some training, but it’s 90% pure instinct and watching them work, man, I love it.”

As the day wore on the herd naturally strung out with riders gathering behind multiple small groups. In the back, where calves lag and the effort is constant, the newness faded to frustration as the hours drug on. Some lost attention, others, sore and tired, become short on patience and try desperately to
spur along cattle, mounts and their fellow riders.

Kerns just hangs back and watches it play out. It’s a process and he knows soon they will have gained skill and confidence and return to enjoying the experience and their surroundings.

Spirits lift as they draw up on camp. Hot and dusty, the crew heads for the July version of a polar plunge in the nearby Little Horn River. The icy waters refresh body and spirits and Alice’s dinner finishes the job. Everyone retires early, exhausted and eager for the next day when they leave the flats and push the cattle up the canyon into the mountains.

“What most veterans miss is working as part of a team to accomplish a demanding mission. The Double Rafter Cattle Drive is about the best thing to replicate that,” says John Mayer, Director of Semper Fi Fund’s Jinx McCain Horsemanship program. They leave with a renewed sense of brotherhood and confidence to pursue new adventures beyond their experience, such as starting their own businesses.

“This is a unique trip,” Taylor says. “It has all to do with the people. Not that we don’t get good people on the other trips, it’s just different. At the beginning of the week we often have withdrawn men and women, not smiling. By the end, they’re laughing and joking. I think it’s even more therapeutic for the crew than it is for them. That’s why I look forward to it each year.”

“A lot of people that have ranches think we’re absolutely crazy,” Alice says. “We look at it as a huge blessing in our lives. We meet people from all over the world and find everybody has the same heart.”