In the American West, an entire summer can go by without a single rain, carving a stark contrast in the landscape between green, irrigated fields and golden dryland. That’s why the modern history of Western farming has been written in irrigation water.

The Dry Farming Collaborative is drawing upon traditional methods to expand the options for vegetable production in the West’s Mediterranean climate, exploring the what-ifs of encouraging plants to seek water deep beneath the surface. In a world of ever-greater plant densities, ever-more-precise water applications, and ever-higher yields, dry farming is a re-boot of what it means to farm in the face of longer dry spells and earlier cut-offs of water supplies.

Think of dry farming as the opposite of the densely packed gardens promoted by Eliot Coleman, suggests Amy Garrett, the Oregon State University Extension agent who launched the Dry Farming Collaborative.

Instead of packing plants by the square inch, dry farmers are spreading five or six plants across a 10-by-10-foot square. Instead of maximizing pounds per acre and dripping water onto thirsty root mats just under the surface, they’re pushing crops to dig deep for water that fell weeks or months before, eking out high-quality produce on land that might otherwise yield a couple of grazing sheep. Instead of laying pipe and fighting weeds all summer, they’re enjoying family time.

“It’s inspiring to see these nutrient-filled fruit in this dry environment,” Garrett marvels.

New mindset. Dry farming requires fine, deep soils with great water-holding capacity. It takes early-maturing varieties that get a strong jump on production while spring moisture is still high in the soil profile. But most of all, it’s about mindset. 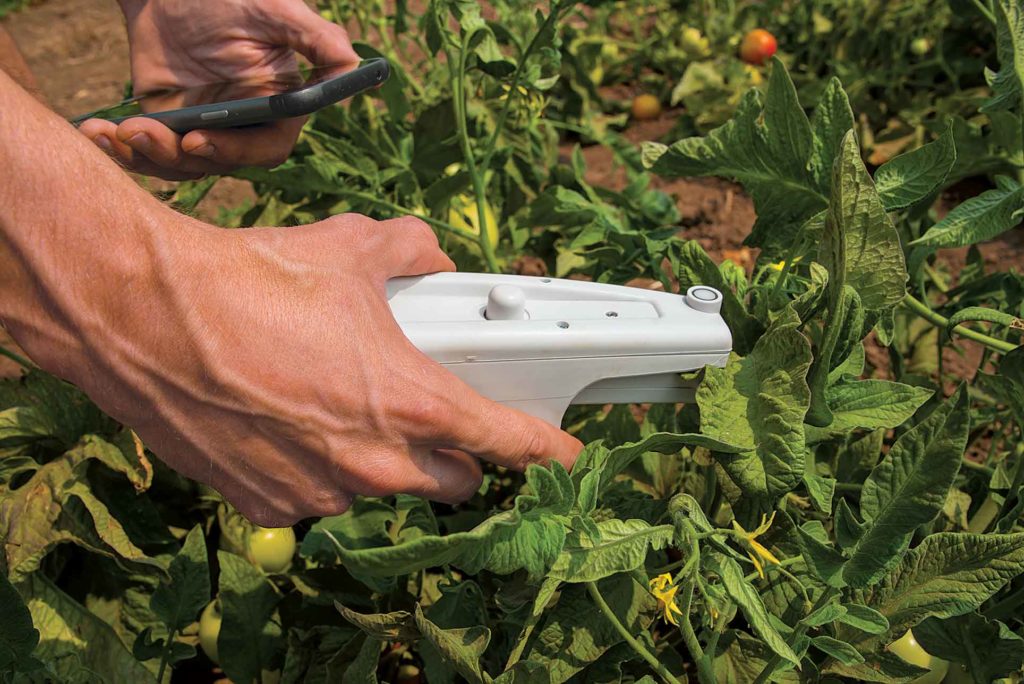 Garrett and a network of researchers and farmers around the West — and around the world — are assessing soil characteristics that make sites suitable for dry farming vegetables. And they are tapping into traditional farming techniques from semi-arid countries.

For instance, one dry farming pioneer picked up planting pointers from Italian immigrants back in the ‘70s. Another collaborative partner interviewed small farmers in Lebanese villages.

With an eye for the science behind ancient traditions, dry farming begins to come into focus. For instance, dry farmers have learned to keep the soil loose at the surface, only compressing it around the base of each transplant. It’s a technique born of the observation that weeds on tilled, dry ground sprout in footprints.

Conventional dry farming wisdom says a gentle packing helps draw moisture up from the depths of the soil through capillary action. As the soil dries down, osmotic pressure—the tendency for moisture to creep in to balance drier areas with wetter ones—pulls water up toward thirsty roots.

Garrett and her colleagues are testing that theory now. They are also compiling best practices for dry farming, like speeding germination by pre-soaking large seeds or planting in warm soil, or planting transplants extra deep in dry weather.

Varietal effects. One of the quests among dry farming advocates is to find vegetable varieties that thrive in the system. 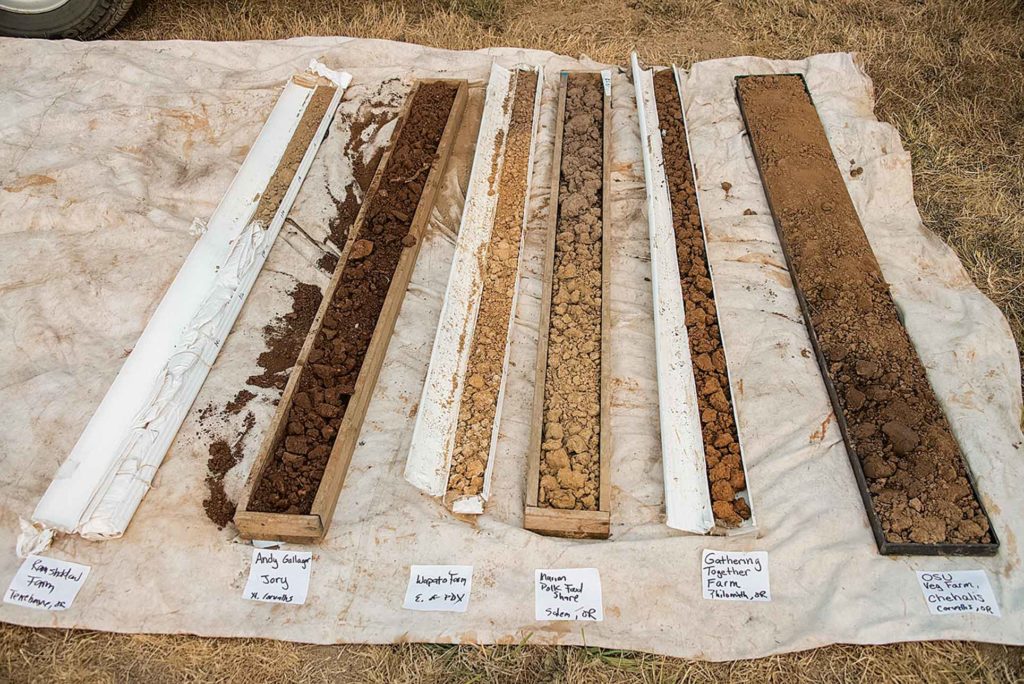 Soil cores from diverse fields allow Garrett’s team to study the impacts of texture and hardpan on dry farming success.

More than pounds. Of course, irrigated crops can be planted much more densely than dry farmed ones, so non-irrigated crops yield less in commercial conditions. But Garrett notes that success in farming can go beyond pounds per acre.

“It’s not a yield maximization strategy, but there are other reasons,” she points out. “There’s taste, and there’s storage life: dry farmed tomatoes may keep longer, and we can put the ‘winter’ back in ‘winter squash,’ as Alex Stone says. If you’re marketing in March instead of November, that’s a huge impact.

“Then there’s the story: ‘we don’t irrigate this,’” she adds.

The bottom line is that the economic benefits can vary dramatically between farms.

“We’re thinking of this as a climate adaptation strategy,” says Gabrielle Roesch-McNally, a fellow with the USDA’s Northwest Climate Hub in Corvallis, Oregon. “Some people are doing it out of concern about lack of water. Wells run dry in the summer or get cut off; they get cut off earlier in the season.”

Into production. Dry farming may allow Rose Potter and Mark Begenisch to bring Rose’s family’s farm near Hillsboro, Oregon, into fruit production. “It’s a family farm, but it’s been fallow pretty much my whole life,” Potter says. “We’ll see how it goes. So far, my indeterminate varieties look good. My determinate varieties look bad. And my cherry tomatoes look amazing.”

Eliza Mason has put a dry pasture near Monroe, Oregon, into tomatoes, zucchini, watermelon, winter squash, corn, cucumber, pepper—a wide range of options to explore what works. By the middle of last August, she was still producing fruit.

“I’m really amazed at the results and so is everyone else who comes to the plot,” Mason says. “We’re doing everything by hand and we’re finding out it’s possible—and fun.”

What’s possible. For Garrett and the Dry Farming Collaborative, it’s all about finding out what’s possible. Post-doc researcher Lucas Nebert is studying whether inoculating plants with endophytes helps them thrive in the stress of dry farmed conditions. And there is always the specter that long
future droughts will drive interest in dry farming.

“What’s happening with water,” says Garrett, “the writing’s all over the wall.”