Mark Peterson decided he would grow cover crops until the cows came home. Eventually, they did.

That’s the short version of a story that has been unfolding over the past eight years at Bent Gate Farm, a corn, soybean and now small grain farm near Stanton, Iowa, operated by Mark and his wife, Melanie.

The Petersons have long been fans of building better soil and protecting it against erosion while restoring soil health. As part of their journey, they have diversified the crop rotation to include a small grain. That led to the next step, drilling a multispecies cover crop—at last count, more than a dozen species. The mix ranges from sorghum sudangrass and pearl millet to sunn hemp, soybean, flax, and okra—as a summer crop planted just after the small grain harvest.

The latest step has been to team up with a neighbor to add a livestock component. “I like what
the cows do when they graze a cover crop,” Mark says. “They turn it into those wonderful cow patties that provide fertilizer nutrients. And it’s easier for us to no-till the next crop into a field where those cows have grazed.”

Peterson credits an organization called Practical Farmers of Iowa for the nudge that started his farm down this path. He took advantage of a small grain cost-share program offered by PFI to get his toe in the water on a crop that adds diversity and provides living roots over winter months. (For more information on small grain production, as well as a fact sheet on grazing cover crops, you can visit the PFI website at practicalfarmers.org.) 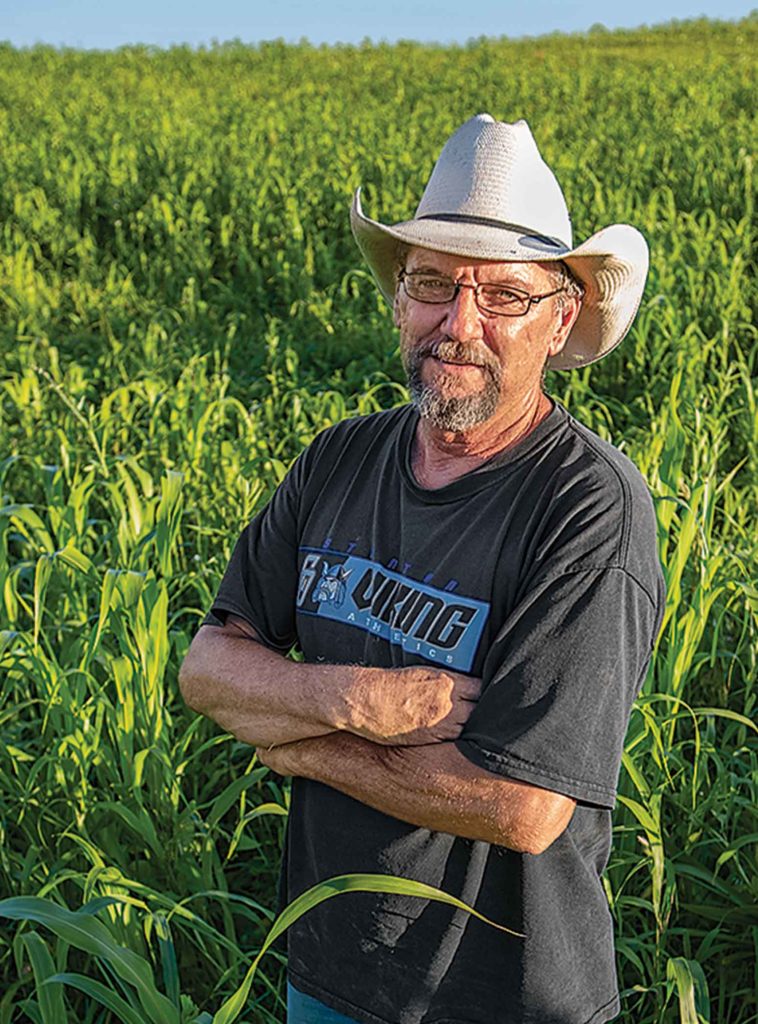 Fence and water. The small grain crop opened up the opportunity to take advantage of an extended growing season for cover crops. So, Mark contacted Green Cover Seed, a Nebraska-based company that mixed a 14-way blend featuring warm-season grasses and legumes along with brassicas.

The Peterson family was taken aback at the rapid growth of the blend. “We didn’t know what to expect,” Mark recalls. “We went to take a look about 60 days after we planted our first summer cover crop, and it was taller than Melanie.”

Worried about what to do with all this biomass, the Petersons called Colten Catterton, a Green Cover Seed representative, who took forage samples and found about two tons of dry matter per acre with a relative forage quality of 147 (RFQ is an index based on dry matter intake and total digestible nutrients). “I told Mark that the ideal way to handle this would be to bring in livestock to graze it,” Catterton says. “The animals process the biomass, but leave most of the nutrients behind. About 85% of the nutrients the animal ingests come out the other end of the animal as readily available fertilizer nutrients.” 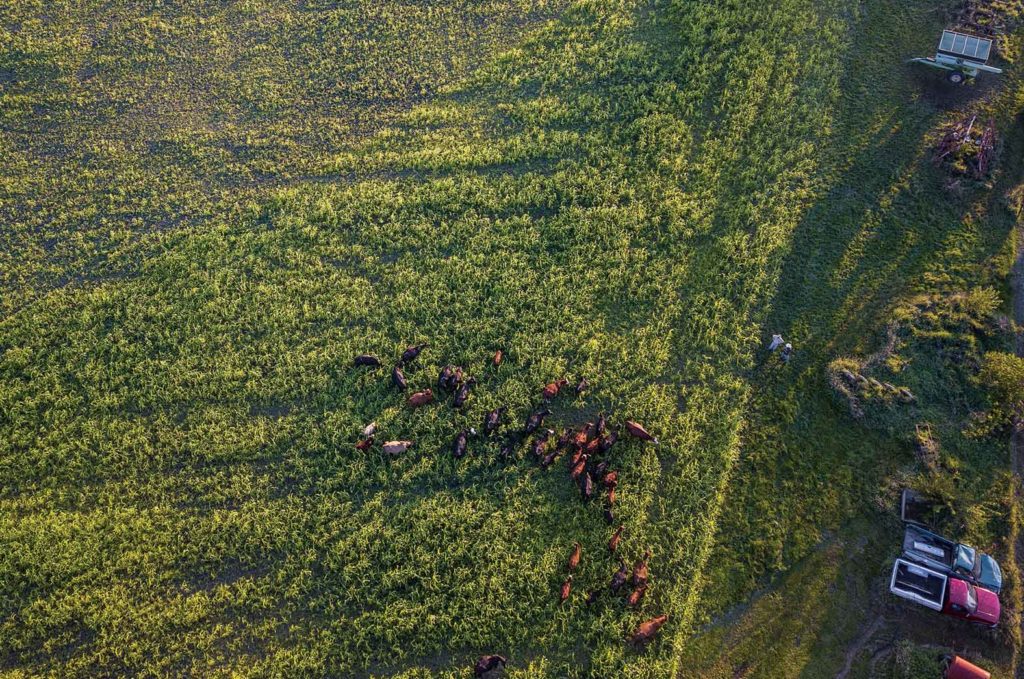 High stocking density gets the most from cover crop grazing.

So that’s what the Petersons did; since they had no livestock of their own, they brought animals back to the farm by cooperating with neighbors who brought cows to the crop. In 2018, neighbor Pete Marshall provided 20 cow-calf pairs to the Peterson homeplace, where they grazed 60 acres of cover crops for about 45 days, starting in September.

“It always comes down to fence and water in these situations,” Marshall says. The Peterson homeplace had little fence, but Marshall specializes in fence construction, so a perimeter high-tensile, single-wire electric fence was soon built to enclose the field; Marshall also used energized polywire to divide the field into four-acre parcels for mob grazing. A little innovation (plus some hauling) made water available to all the paddocks.

Marshall paid a fee for the opportunity to graze; how to figure the value of a custom-grazed crop could be the subject of an entire story. Peterson sees a longer-term payback. “Our organic matter improves with this approach. We also see yield increases, significant increases, in corn crops in subsequent years. Multi-species cover crops are a source of multi-year returns.”