Island In The Stream

Farming on an island takes a lot of planning.

Island In The Stream

Farming on an island takes a lot of planning.

Hurry up and wait is a harvest fact of life when Jason and Christina Pyke truck wheat, corn and soybeans off their Wolfe Island, Ontario farm. They must arrive at the dock 30 minutes early to catch the hourly ferry sailings off the island to Kingston, Ontario. If they want to get a spot on the peak morning commute ferry, they have to arrive a good hour early.

“Our municipality has worked out an arrangement with the Ministry of Transportation Ontario, (MTO) who runs the ferry,” Pyke says. “Farmers get priority boarding for grain trucks taking crop off of the island outside of the morning and afternoon commuter rush. But, you have to be there at least 20 minutes ahead of sailing.”

Nowhere on the island is very far from the water, so Lake Ontario has a big impact on its climate. It acts as a giant heat sink. Cold water delays the start of the spring growing season, but since the water warms up in the summer, it extends the season well into the fall. 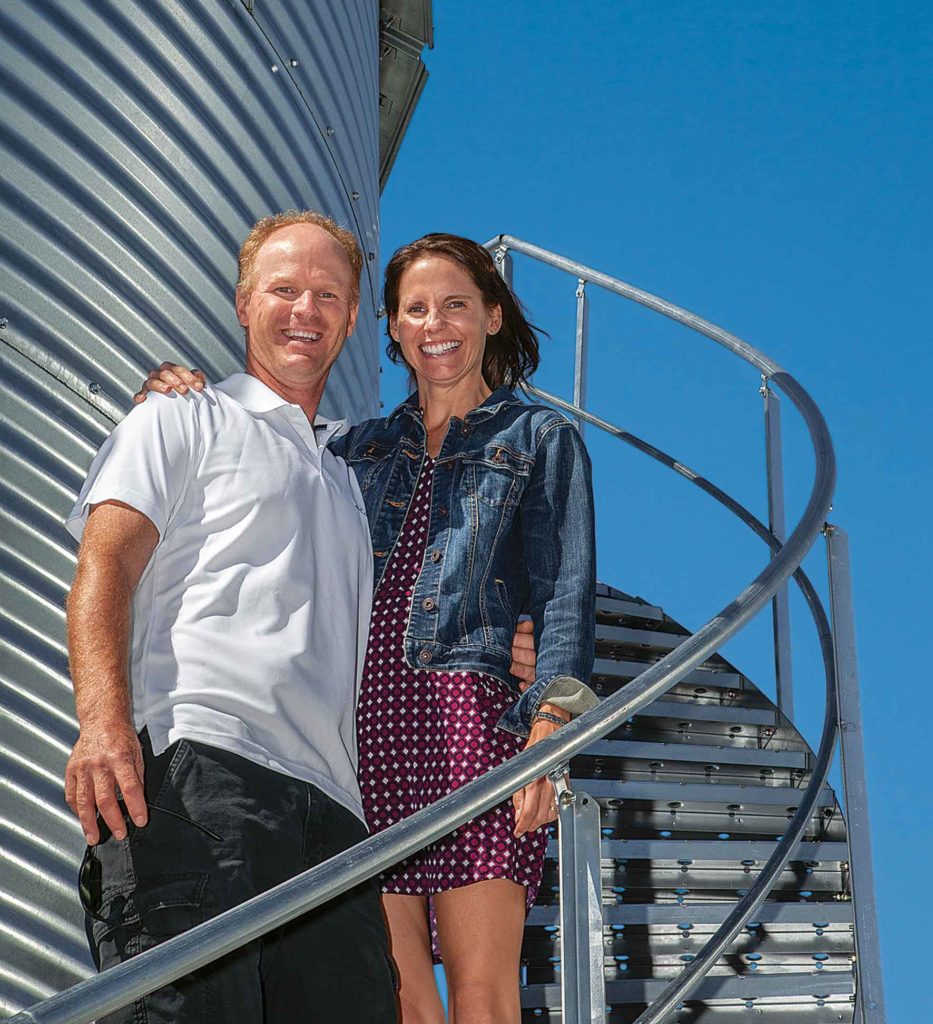 Warm water is a massive help in a year like 2019 when unrelenting rains severely delayed
spring planting. Typically, they grow 3000 heat unit crop varieties but have slightly lower expected yields on their tiled, heavy clay fields than Southwestern Ontarians have.

The island is still mostly agricultural with about 1500 year-round residents. Cottagers double the population to around 3000 from June through September. Unfortunately, this surge coincides with farmers’ peak growing period and puts a strain on the vital ferry services they need.

“All of our inputs, all of our seed, fertilizer, fuel, and propane has to come across the ferry,” Jason Pyke says. “You’re always planning ahead. During planting season you have to make sure you always have enough fertilizer and seed in your inventory to last the next two, three days, four days or a week out. Everything has to be in place ahead of time because you can’t count on last-minute deliveries.”

They have to continually monitor their fuel supply because if they run out of fuel, it might be a day or two before their fuel dealer could get to them. Getting fuel has become a little easier; at one point the ferry only allowed dangerous goods, like propane and gasoline, on one or two days a week. Diesel fuel can be purchased at any time.

Even getting a truck load of concrete to build new grain storage bins is more complicated. Island orders throw up red flags for concrete companies because a trip that might take half an hour in the city could take two, three hours or more coming out to the island. They have to be careful that the concrete doesn’t start setting up too quickly on the truck. 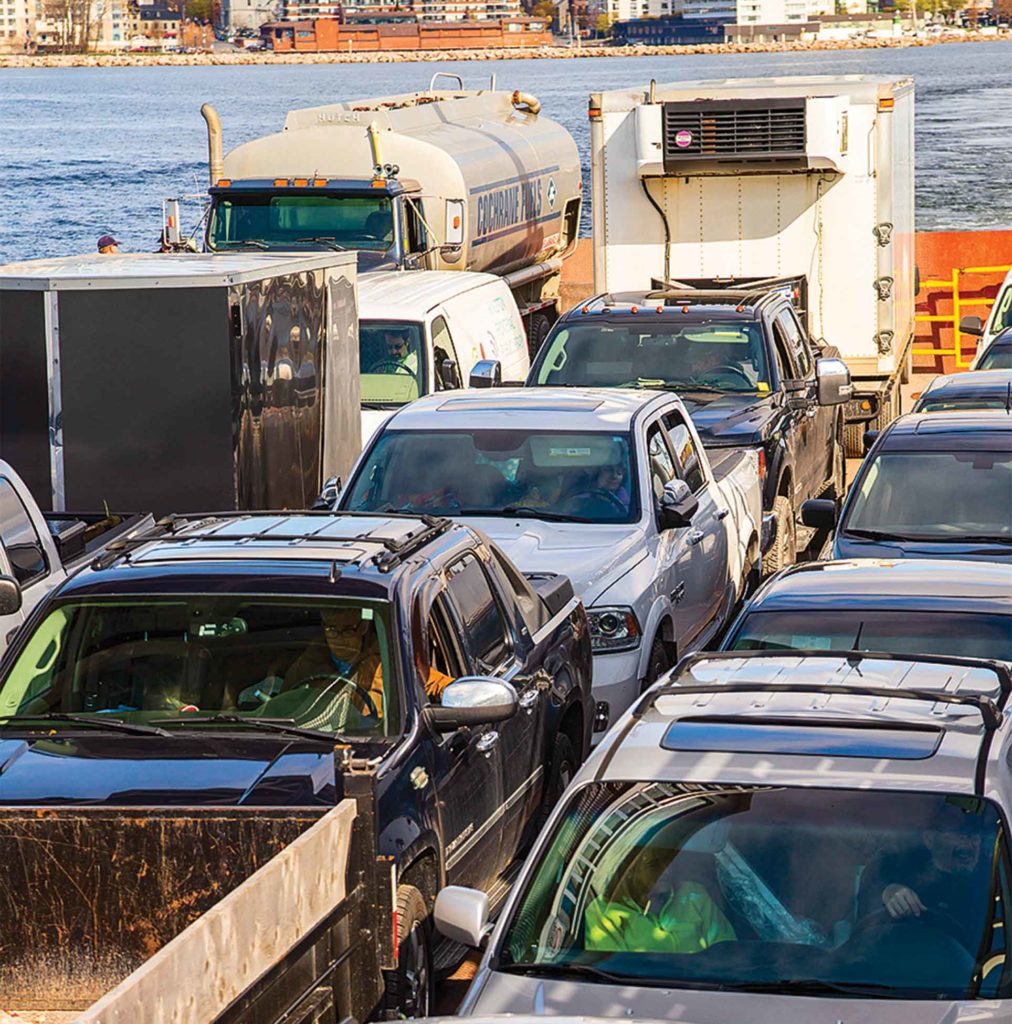 Wolfe Island is largely agricultural, but like the rest of the islands in Ontario and New York’s 1000 Island chain, it’s popular with cottagers too. Farmers have to compete with commuters and tourists for a spot on the ferry.

Since the ferry is getting busier, the Pykes are expanding their grain storage to give them more flexibility during harvest. Grain elevators are relatively close as the crow flies, but the ferry factor rarely allows them to haul more than two loads a day.

The ferry injects a certain level of randomness into their lifestyle too. The Pykes never know for sure if they’ll be able to find room on the ferry they want or not. Plans are regularly adjusted.

“I was going to catch the 6:30 ferry the other day but planned to get my breakfast and take the 7:30 one if I missed it,” Pyke explains. “But I was able to drive right on it.”

Having so much uncertainty in their daily movements would be a foreign concept to most people, but choosing an island life means accepting that you are partially cut off from the outside world. The ferry acts as a drawbridge and controls the times when you can come and go. However, most people that live on an island say that’s part of the attraction.

“We have a very scheduled life, but it comes with its benefits,” Christina Pyke says. “Being a little bit isolated gives us a quieter rural lifestyle than you would expect to have elsewhere in Southwestern or Eastern Ontario.”

The Pykes hope to spend less time in ferry lineups in the near future. The MTO has told islanders they’ll have a second ferry that should be operational in 2021.

Using technology to identify the best use for every acre.

A volunteer goes above and beyond to bring agriculture to children.