Martin Vanden Hoven isn’t a health care provider, but his company, Relief Herdsmen Services, performs a valuable health service. He’s built a thriving business, based in Mitchell, Ontario, that provides relief herdsmen to dairy farms in southwestern Ontario so they can take a break from the barn when they need one. Small family run operations contract him to do their chores when they leave for a wedding or a holiday. Large farms bring him in when they need to cover for senior managers on vacation.

Pop culture is filled with sayings like, ‘take time to stop and smell the roses’, and nearly everyone has likely heard of Harold Kushner’s famous quote, “No one ever said on their deathbed ‘I wish I’d spent more time at the office.’” Despite this, Canadians and Americans have traditionally deified work. It’s standard to ask, ‘what do you do?’ whenever you meet a new person. People who put in long hours are held in high regard. At least we’re not as bad as the Japanese; they even have a word for working yourself to death in their language, karoshi.

Good for your health. Taking time off work is critical for your long-term wellbeing. Study after study shows that anyone who doesn’t regularly take holidays puts their mental and physical health at risk. Holidays reduce the risk of having heart attacks and stress-related health problems like depression, anxiety, and obesity. Failure to take them also increases marital and relationship strife because it translates into spending less time together as a family. Conversely, even taking the time to plan a holiday increases the family’s overall happiness level.

Skipping holidays. Despite the benefits, Expedia.ca’s “Vacation Deprivation Study” in 2016 found that Canadians are leaving 31 million vacation days unused each year. It found that while the average worker in Canada receives 17.3 days off, they will only take 14. More than a quarter of the Canadian workforce, 27%, go more than a year without taking a day off. Contrary to popular opinion though, it found workers from the Millennial generation were the least likely to take time off.

Traditionally, no farmers have been less willing to take a day off work than dairy farmers. After all cows have to be milked at least twice a day, 365 days of the year, come what may. Larger dairies maintain teams of shift workers on staff to ensure that no one has to work more than a standard 40-hour week regularly. But smaller dairies often can’t afford the luxury of robust staffing levels. It’s common for these farmers to feel they are irreplaceable, so they’ll go months, or sometimes years on end, without taking a day off.

For the sake of full disclosure, I personally grew up on a dairy farm in Saskatchewan. I could count the days my father took off while I was growing up on my fingers and toes. His extreme workload played a big part in my decision not to follow in his footsteps. I wanted the freedom to take a vacation with my family as my non-dairy farming classmates did. 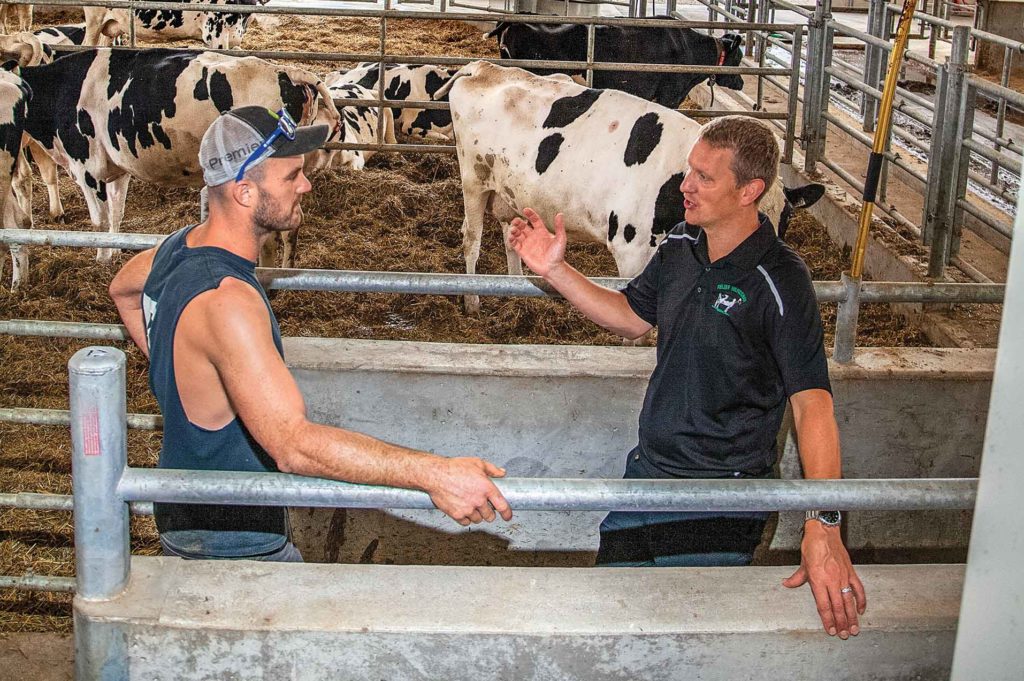 Evan Degier and Martin Vanden Hoven discuss operations in the DeGier’s new robot barn. Vanden Hoven says milking doesn’t vary much from farm to farm; a tie-stall is a tie-stall, a parlour is a parlour and a Lely robot is a Lely robot, there can be lots of variation in the feeding regimens from barn to barn.

Want their time off. Attitudes are changing, Vanden Hoven says. The new generation is definitely going away more; they’re unwilling to spend their entire lives chained to their barn as their parents did. So, it’s a red-letter day when Relief Herdsmen Services arrives at the farm; it signals the holidays are here. They can enjoy time with their children or just take a breather away and come back refreshed.

“They’re really excited that I’m here and I’m excited that I give them a chance to get away,” Vanden Hoven says. “That excitement is why I got into it. I know they can’t find anybody else, so I’m a relief for them. I always say I’m in this business for the farmer first, then the cows, and then the paycheck. If I were just worried about making lots of money, I would likely do a lot better just being employed by a big dairy.”

Rob Vanden Hengel first booked Vanden Hoven to come in and run his 50-cow robot operation near Seaforth, Ontario in 2008 so he could attend his sister’s wedding. It went so smoothly that he now doesn’t hesitate to contact him whenever he needs to get away.

“Basically, I saw his ad in the Ontario Farmer and decided to give him a shot,” Vanden Hengel says. “We brought him in the weekend before we needed to get away to see how it would work out. Now, whenever we first start planning to leave for a lengthier vacation, or anything like that, I’ll call him to see when he has openings. I know he’ll keep things running while we’re away. I get calls from clients who need me to fill-in from Friday night to Sunday night for a wedding; others will want me for a week or two, so they can take off for a vacation to Jamaica,” Vanden Hoven says. “I’ve got a lot of Dutch customers that might want me for two weeks while they go back to Holland. Typically, the average client wants me to fill in for them between five and seven days.

Vanden Hoven has milked cows for most of his life. He started as a teenager in his father’s 50-cow tie-stall dairy. He likely would have continued along a more standard dairy career pathway if the family’s barn hadn’t been destroyed in a fire. He worked at several jobs afterward but found he actually missed milking cows. Since he didn’t want to milk every day, he developed the idea of providing relief milking services.

“It really took off,” Vanden Hoven says. “I currently have worked on over 150 farms and on average milk 220 days a year, so it’s essentially a full-time job. The new robots, new parlors, and barns have made my life easier. I really enjoy it because it’s always different; the routine of always doing the same thing every day in the same barn just didn’t appeal to me. Relief milking allows me to go in to do chores for three or five days and then move on to the next one. It always stays new. It’s like a honeymoon almost every day.”

Over a single month, he could milk in tie-stalls, free stalls, parlors and with robots. At first glance, the sheer variety of farms and systems Vanden Hoven works with seems overwhelming. But, he says, it’s not as difficult as it looks; the trick is always to keep a standard checklist of the five items he needs to know in his head: filter, pipe in the tank, close tank, plate cooler, and any treated cows. “After that nothing about milking is very complicated, they all generally follow the same idea,” Vanden Hoven says. “A tie-stall is a tie-stall, a parlor is a parlor, a Lely robot is a Lely robot, and a cow is a cow. They don’t change that much from farm to farm, so the milking is not that big of a deal. Feeding can be difficult though because of all the different tractors, TMR mixers and skid steer loaders you need to drive and all the different silos you have to run.”

Pressure on dairy farmers is growing steadily, so it’s not that surprising that more are feeling the need to get away from it now and then. After all, every study says taking a holiday is a great way to cope with the stress of operating a farm. 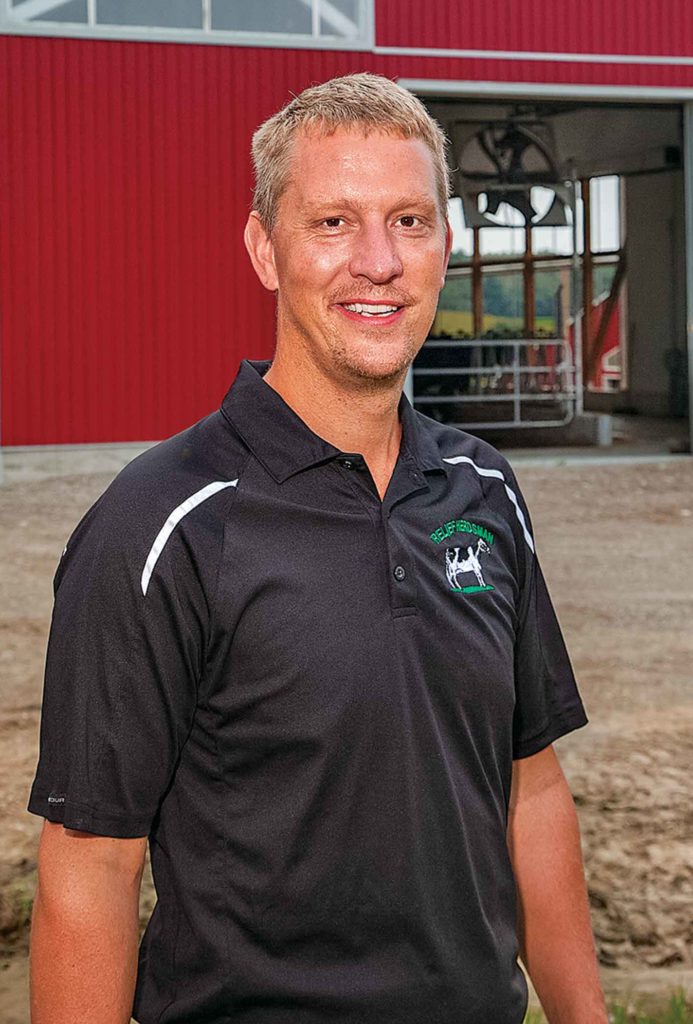 Demand for Vanden Hengel’s Relief Herdsmen Services has grown to the point it’s no longer a one man job. He’s now developing a call list of qualified herdsmen who want to work with him to make extra money.

Demand for relief herdsmen has now grown beyond the point where the work can be handled by just one person. Vanden Hoven has to turn down at least 25 to 30 calls a year because of conflicting bookings. He also gets inquiries from far beyond his home territory.

Building a call list. Vanden Hoven is now in the process of building a relief milking call list of experienced herdsmen who want to make a few extra dollars by taking on additional jobs. He hopes he’ll be able to find enough workers to allow him to respond to producers’ needs.

He also hopes to find enough workers that will allow him to be home and spend more time with his own daughter when she gets home from school.

It’s a win-win for everyone involved and a great example of how the short term “gig economy” concept, common in the technology sector, can work in agriculture.

Vanden Hengel, for one, counts on it when he has to be away from the barn. He can leave reassured with the knowledge that there’s someone there with the skill to look after things while he’s gone for a few days. It gives him the freedom to relax and unwind so he will be physically and mentally refreshed when he comes back to pick up the reins.