Checking cattle on horseback remains a way of life at John Smith’s and Laura Laing’s ranch, the Plateau Cattle Company. In the foothills west of Nanton, Alberta, this hasn’t changed since Smith’s grandfather first started ranching in the region.

But don’t assume they’re a couple who insist on following  the old cowboy  ways, come  what may. Smith will destroy that impression the first time he launches the drone he packs in his saddlebag to see if any calves are hiding in a coulee.

While ranching’s traditions are honored, the couple keeps their eyes firmly fixed on the future. They use horses because it’s more efficient and less stressful for their cattle than using quads. And lower stress translates into faster weight gains and ultimately higher profits for their operation.

They firmly believe that it’ll be combinations of traditional ways and new technology that will allow their ranch to adapt to the challenges the industry faces.

“Like us, consumers care about animal welfare and the environment; we have to engage them in conversations and listen to them to maintain a social license and public trust,” says Laing. “We need to help consumers buying our products understand that their beef is healthy, safe, and raised sustainably, so they feel good about eating it. At the same time, we have to find ways to meet their concerns in ways that still work for our bottom line.”

There is a dire need to raise awareness of the integral role that cattle play in land stewardship and sustainability, as well as promoting and protecting healthy grasslands, Laing says. Recent initiatives in BC support the awareness of the positive impact of cattle on the environment.

“In BC, they are currently utilizing cattle to help suppress wildfires, by keeping vegetation and green shrubs down and promoting healthy grasslands.”

It’s critical for the cattle sector, slow to adopt new technology, to find new ways to raise cattle more efficiently and humanely, Laing says. For example, they’ve moved away from branding calves on their operation. It’s raised more than a few of their neighbors’ eyebrows. 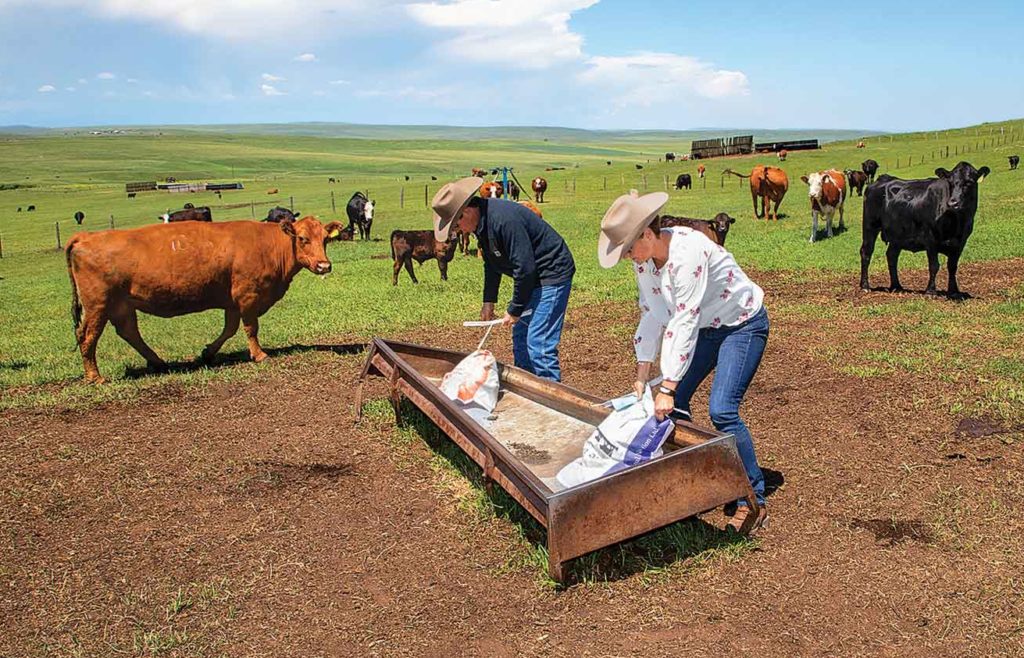 Smith and Laing believe the cow/calf sector has to engage with consumers and listen to their concerns about animal welfare and the environment. They need to adopt new technology to raise cattle more humanely and efficiently.

“Since we stopped branding, we have neighbors tease us that they know where they can get free calves,” Smith says. “But that’s much easier said than done as each calf has three forms of ID.

There’s a visual dangle tag with our ranch’s name. Then there is an RFID tag that’s registered to us, and finally, the calf is sucking on our cow that has our freeze brand. Maybe in the future microchips, as people use for their pets, will be cheap enough to use for cow-calf production too.”

“By not branding, we have seen up to 30 pounds greater gain,” Laing says. “We check the birth weights of all our calves in the field with a mobile calf containment system called a calf cage.

Because we insist and rely on strict data capture and protocols, we know that we’re moving in the right direction and have the data to prove it. Of course, we miss the social tradition of getting together with the neighbors on branding day, but it’s been a huge advancement for us and our bottom line.”

Installing new handling facilities, complete with a state-of-the-art silencing chute to handle their calves, has been another investment in their animals’ welfare. One simple innovation, attaching gym mats to the inside
of the chute, holds calves gently but firmly when they’re processed.

“The calf gets this extra squeeze when they come in. It has a significant calming effect,” Laing says. “They are in and out so quick that there’s no bawling before they’re back out in the pasture. Compare that to commonly losing one or two days of gain with downtime from the stress of branding, or the lasting impact of stress recall.”

The advent of cloud-based calf management apps (they use Calf Book) allows them to record and track every cow-calf interaction while they are out in the pasture. This tracking data offers tremendous benefits as well. It makes traceability simple, and conforming to verified beef programs easy. They no longer have to keep track of so many little slips of paper in numerous locations.

The couple keeps faith with some of the cattle industry traditions they love. But they are also excited by the potential that new technology will bring to their ranch in the future.

Currently, they use the drone to scout and occasionally use it to herd the cattle into more accessible areas. It sometimes saves hours on horseback on the 85,000 acres of pasture lands that their cattle graze — plus, Smith says, “It’s fun to fly.”

“Perhaps in the future, drones will be able to interface directly with high-frequency tags on cattle too,” says Smith. “It’d take locating and monitoring cattle on the range to a whole new level. It would offer new ways to show  consumers the extensive care we give our cattle, and our commitment to preserving and protecting the environment for generations to come.”