There was plenty to discuss. Edison was searching for a domestic replacement for natural rubber (and young tire magnate Harvey Firestone was sitting on the porch, too, evidently listening intently). Ford was genuinely interested in plant-based materials for automotive body parts. And Burbank—a legendary plant breeder who invited guests to visit him while they were in San Francisco for the Panama Pacific Exposition—was eager to secure patent protection for the hundreds of varieties of plants he was introducing. With those intersecting interests and friendships that would last the rest of their lives, the three inventors represented a sort of golden-age-of-industry dream team.

Wizardry. Among celebrity watchers of the age, it would have come as little surprise to see Burbank shoulder to shoulder with Edison and Ford. He was a superstar who developed more than 800 varieties of fruits, vegetables, and flowers, says Rebecca Baker, archivist/historian at the Luther Burbank Home and Gardens in Santa Rosa. In an era when farmers filled the nation, and most town people were avid gardeners, new plant varieties were major innovations, Baker notes. People called Burbank a wizard.

For millions of turn-of-the-century Americans, Burbank’s Santa Rosa plum was as exciting as a light bulb. His experiments with spineless cactus as an emergency livestock forage promised to provide a powerful hedge against drought around the world.

American dream. Luther Burbank also embodied the American dream. He was self-taught, a plucky vegetable farmer and entrepreneur from a small town in Massachusetts. Fascinated by Darwin’s theory of evolution, he harnessed that emerging science to breed early corn and tastier produce. 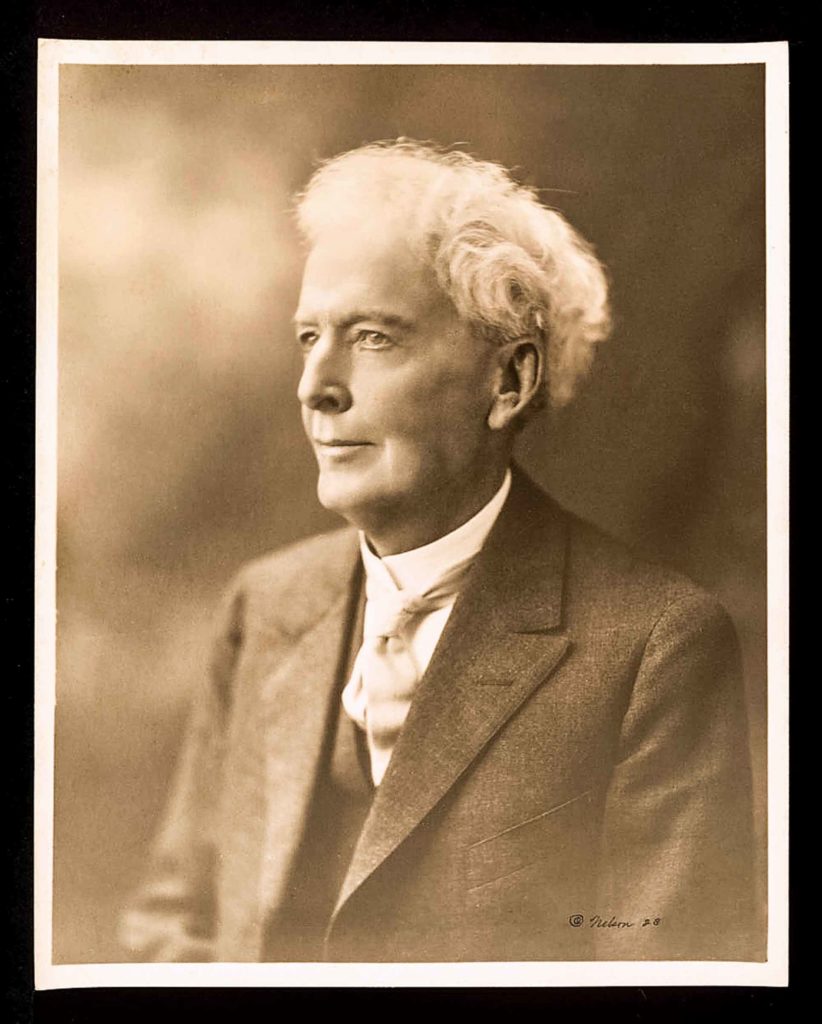 In 1875, he sold the rights to a handsome, starchy potato—dubbed the Burbank—to a local seed dealer for $150 (about $3,000 today). He used the money to move to California, where two of his brothers ranched. Making do as a carpenter, he walked around Sonoma and Marin counties until choosing Santa Rosa as home for his nursery.

At the time, he wrote that farmers in the area were much more interested in growing wheat than fruit. But the grain-growing practices of the day depleted the soil, and farmers began the shift to fruit production. Burbank was already collecting plants from around the world that would serve as breeding stock for his many projects.

“There were a lot of different directions he went in,” notes Baker, pointing out that he was as interested in ornamentals as in food crops. “He said, ‘the need for beautiful and gracious and lovely things in life is as vital a need as the urge for bread.’”

Longevity. What’s as amazing as Burbank’s productivity and the breadth of his breeding success is the longevity of many of the plants he developed.

Today, the average new corn hybrid has a commercial life cycle of well under a decade before it’s replaced and forgotten. Over 140 years after Luther Burbank bred the potato that bears his name, the Russet Burbank (a rough-skinned mutation of his original 1875 spud) remains the gold standard for baking and french fry potatoes. The value of the Russet Burbank crop in the U.S. still exceeds $1 billion annually.

Burbank’s Santa Rosa plum, introduced in 1906, defines plum flavor and serves today as a pollinizer variety in countless commercial orchards. The Paradox walnut, launched in 1896—which Burbank hybridized to create a fast-growing, fine-grained hardwood—remains a popular rootstock for fighting disease in commercial walnuts. His Shasta daisies and Rainbow Swiss chard are garden staples. And he is credited for the ongoing popularity of gladiolus, thanks to his development of dense, long-lasting blooms.

Challenges. One of Burbank’s strengths was that he wasn’t bound by convention.

The Santa Rosa Daily Democrat wrote in 1892, “Can’t was never in his dictionary. He has never been bound by the supposed laws of hybridity; by the laws laid down in books; that the books and supposed former facts of science say that hybrids cannot be obtained between this and that species, is no rule or guide for him.” 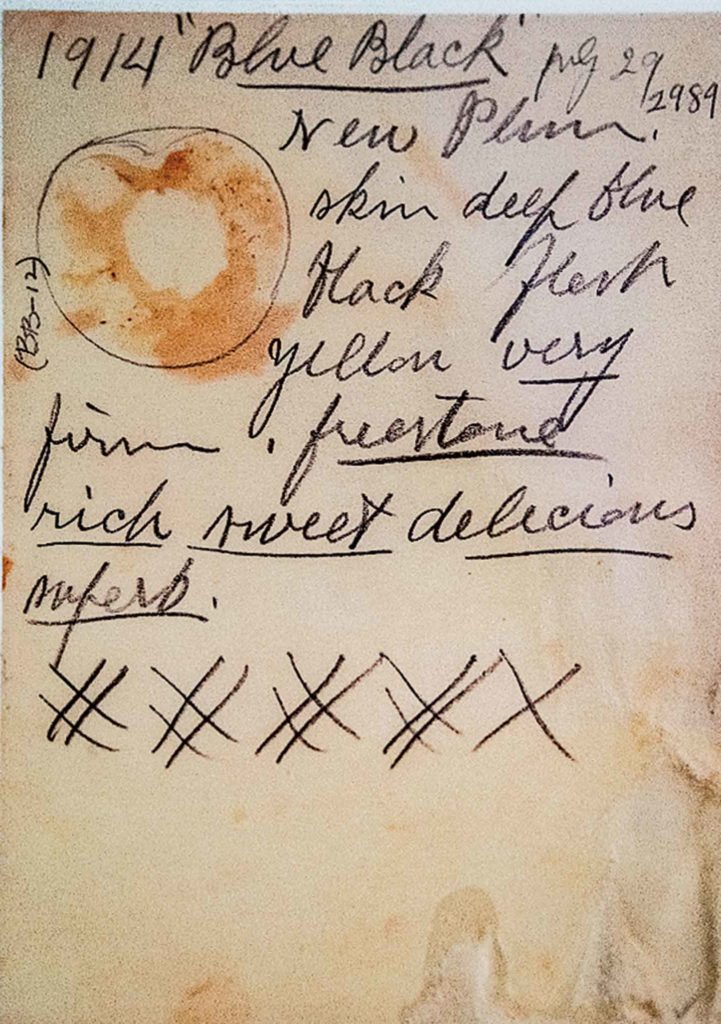 DNA from Burbank’s “fruit prints” may provide clues to his remarkable but mysterious crosses.

Burbank also didn’t take the meticulous notes that are the hallmark of scientific crossing—he made his selections based on intuition and observation. That did not sit well with many scientists.

“The downside to his often haphazard breeding methods was that his record-keeping was atrocious,” adds Rachel Spaeth, garden curator of the Luther Burbank Home and Gardens. “It was so terrible that he once lost a Carnegie Grant for $10,000 because he would not write down the parentage for his experimental crosses.”

DNA test. Burbank’s unorthodox methods may have boosted his productivity. Perhaps it camouflaged his crosses from copycats when there was no legal protection for plant varieties. But they also left scientists like Spaeth with only a sketchy idea of the genetic legacies behind many important fruit varieties.

But Burbank did leave clues that Spaeth hopes to decipher. He made a “fruit print” of each of his crosses, pressing a cut fruit onto a piece of paper, tracing it, and writing his observations besides the sticky circle. Pear and apple prints contain mostly sugar, but plum prints left traces of flesh. 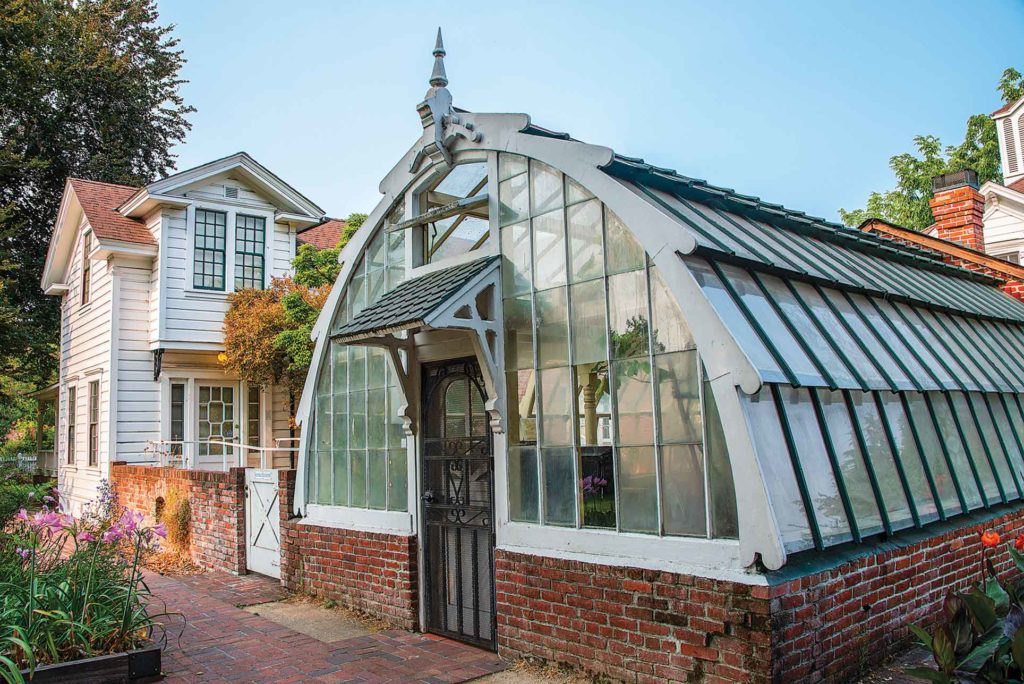 First, she has to show the Library of Congress—which owns most of Burbank’s fruit prints—that scratching off DNA samples from priceless artifacts is worthwhile. Spaeth is currently making fruit prints of her own and using them to test her procedure. She is also building a database of plum DNA from Burbank-bred trees to compare with the genetic markers she finds on the old prints.

Spaeth’s research could reveal the complexity of Burbank’s crosses. Just how far was he able to push the laws of hybridity? And what can we learn from century-old records and heirlooms?

“This experiment demonstrates the value of preserved collections as a rich source of genetic information and contributes to the relevance of maintaining these collections,” Spaeth notes.

“As people’s interest in the provenance of their food continues to grow, the role and motivations of these scientists deserve more attention,” Bolden says. “This connection is the best hope we have to advance discussions about food security, seed/food diversity, and sustainability.”

These rural towns have renewed their appeal.