Dreams For The Prairie

Pigs and prairie plants pair up as Monarch Bio Energy rolls out a plan to help save the planet.

Dreams For The Prairie

Pigs and prairie plants pair up as Monarch Bio Energy rolls out a plan to help save the planet.

Pigs and pink blazing star. Lagoons and larkspur. An entrepreneur with a dream, a food company with a mission to help heal the planet, and monarch butterflies. Don’t forget the butterflies.

That’s just the tip of the iceberg, however. The vision for this partnership includes restoring prairie, with an eye on using sustainably harvested prairie biomass as an additional feedstock for producing RNG.

The impacts could be significant. When all Smithfield company-owned pig finishing barns are fitted with infrastructure to produce RNG, annual RNG production is expected to hit 1.3 million dekatherms.

That level of RNG production has a beneficial impact on air quality equivalent to taking 130,000 gasoline-powered vehicles off the road. And much of the RNG produced here is, indeed, likely to displace fossil transportation fuel. California’s Low Carbon Fuel Standard provides incentives that have created a lucrative market for RNG as a vehicle fuel.

Dream to reality. The entrepreneur with the vision is Rudi Roeslein, now 71 years of age. He was introduced to readers of The Furrow in a Spring 2017 story called Gas Natural.

His pipe dream—or, more accurately, pipeline dream—was to cover the Smithfield lagoons with an impermeable membrane, capture the methane produced by anaerobic action, clean up the gas, and inject it into the U.S. pipeline system.

All those dreams in the first phase of the project are now a reality. “This project is definitely a marathon,” says Roeslein, who founded Roeslein and Associates, a St. Louis based engineering and modular fabrication company. “But we are off and running.” 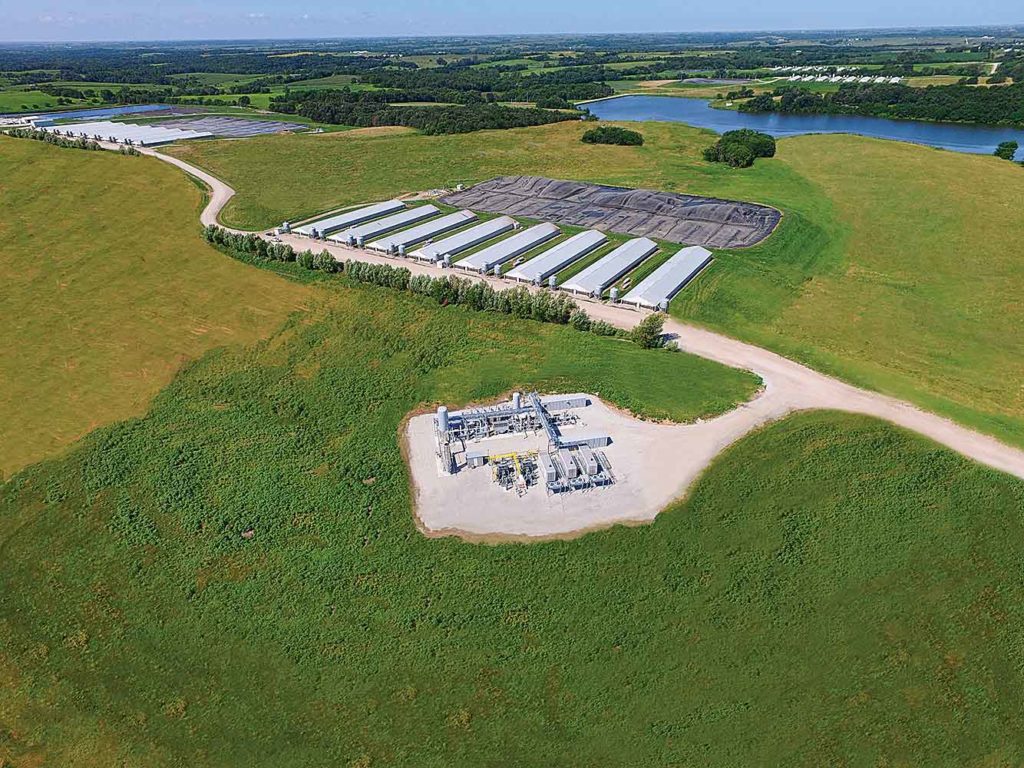 Covered lagoons allow methane gas to be captured, scrubbed, and injected as renewable natural gas into the nation’s pipeline system.

The project reduces or removes greenhouse gases, as defined in the California Carbon Offset credits program. The RNG produced from these Smithfield pig farms centered around Milan, Mo., is highly valued in the pipeline.

In early 2019, the Monarch Bioenergy joint venture received the lowest Carbon Intensity Score ever awarded by California’s Air Resources Board. Lower numbers indicate less carbon intensity, and thus a higher value. The RNG from Monarch Bioenergy received a score of negative 372. “That makes our RNG the most valuable of any currently available in the California market,” Roeslein says.

Stewardship. Monarch Bioenergy is now pursuing its second horizon, one that looks for ways to include native plants from restored prairie on highly erodible land. Such a vision fits well with the goals of Smithfield Foods, the world’s largest hog producer. In addition to being a $15 billion global food company, Smithfield also wants to be known as a responsible steward of the planet. The company recently introduced a strategic platform called Smithfield Renewables to lead and accelerate the company’s renewable energy efforts. Smithfield’s goal is to reduce its greenhouse gas emissions 25% by 2025.

The Smithfield Foundation has teamed with RAE and the Environmental Defense Fund to restore 1,000 acres of prairie on land surrounding its Missouri farms. These areas serve as key prairie habitat for the monarch butterfly—which flies here on its annual migration—but they provide ecological services and additional wildlife habitat as well.

“We recognize that the prairie is both an environmental and an economic force,” says Kraig Westerbeek, senior director of Smithfield Renewables. “While helping to protect the environment, prairie also is a potential new revenue opportunity,” he says. “Prairie biomass could provide an alternative feedstock to provide clean, renewable energy.”

Life On The Edge