Cover crops need a head start to be successful in a corn/soybean rotation. In areas where the crop harvest drags into late fall, there’s seldom enough growing season left for covers to reach a growth stage that maximizes soil health benefits. Innovative farmers are finding ways to give cover crops that advantage, and the easiest of those is to plant shorter season cash crops.

That approach has worked well for Brownville, Nebraska, farmer Daryl Obermeyer. “We’re convinced of the benefits of a healthy soil and cover crops help achieve that goal. We want to get them integrated into our rotation in whatever way possible,” says Obermeyer.

“We’ve tried broadcasting cover crop seed into cash crops before harvest with only limited success, and  we’ve considered interseeding covers into knee-high corn, but that raises concerns about competition. However, planting short-season corn and soybeans lets us harvest two to three weeks earlier, leaving time for cover crops to have a significant impact,” he adds.

The knock on short-season cash crops is that yields will decline. But side-by-side tests on Obermeyer’s farm show that over time there’s not a lot of difference in yield.

“We’re comparing 106-day corn hybrids to 114-day hybrids, and the results have varied with the year’s weather. In dry years the short-season corn yielded more, while in wetter years the long-season hybrids come out ahead. We’re also comparing short-season soybeans in the 2.4 maturity group to 3.8 maturity varieties, and find no yield difference. I believe seed companies are putting more effort into improving their short-season products,” says Obermeyer. 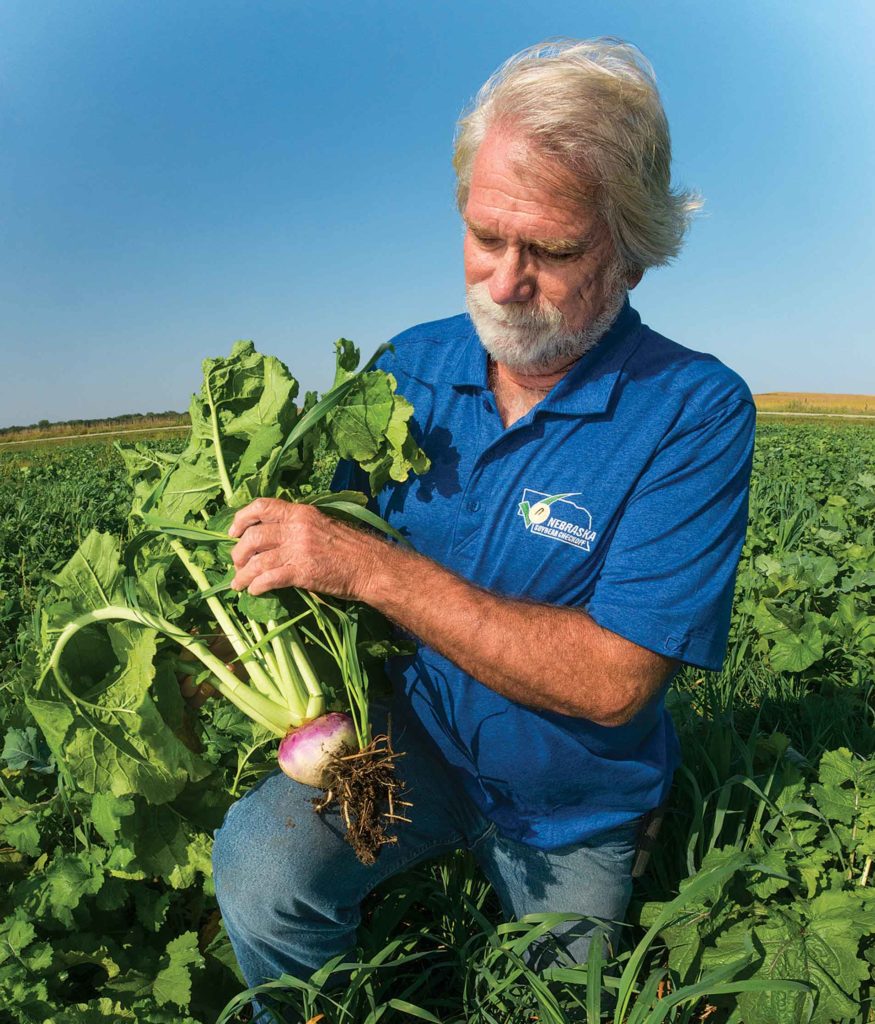 Obermeyer is one of 17 farmers involved in the Nebraska Soil Health Initiative, a joint effort by NRCS and the University of Nebraska. “We’re demonstrating  systems that promote soil health benefits of cover crops and other soil health practices,” says Aaron Hird, Nebraska State Soil Health Specialist.

“Our initial assessment of the impact that cover crop strategies  have on various soil quality factors indicates why it’s so important to get cover crops into the rotation.”

“Even if short-season crops yield slightly less, these types of soil health improvements may offset any disadvantage,” says Obermeyer.

A popular strategy. Holtwood, Pennsylvania, farmer Steve Groff also champions the role short-season cash crops can play in cover cropping. “It’s the easiest way to get cover crops planted in the fall,” says Groff, whose soil health passion has launched him as The Cover Crop Coach (covercropcoaching.com.). “This approach allows us to plant from one to three weeks earlier in the fall, and that is huge. I believe a day in September can be worth up to seven days in October when it comes to maximizing the benefits to soil health,” adds Groff.

Groff has compared short-season corn hybrids (under 100 days) to long-season hybrids (more than 110 days) on his farm since 2012. “The short-season types have averaged 181 bushels per acre while long-season hybrids averaged 190 bushels. However, we’ve found that cover crops planted after the short-season corn developed nearly twice as much biomass. And the following corn crop yielded seven bushels per acre more, so we’ve about made up the loss and have a lot of other benefits as well.”

Groff advises growers to try short-season crops on 5 to 10% of their acreage. They should work closely with their seedsman to select the best hybrids and varieties for their area, and focus on their farm’s poorer quality soils.

Life On The Edge