It’s hard to believe the purchase of a microscope was the tipping point that led Derek and Tannis Axten to construct a food-grade seed cleaning plant on their Minton, Saskatchewan, farm. But it was. In fact, the microscope can be linked to many recent changes on their prairie farm.

Followers of Dwayne Beck of Dakota Lakes Research Farm, Gabe Brown and others since 2007, the Axtens thought they were doing right by their soils.  And for the most part, they were. They had diversified their farm with more crops than they could count on two hands, practiced no-till and intercropping, and used cover crops on their 5,000 acres.

In general, they were doing great. They’d found new security in decreased inputs, increased soil moisture retention, and higher yields on intercropped acres (as both crops yielded more than if planted alone). But when they took a very, very close look at their soils, they discovered more could be accomplished. And they certainly have.

In 2015, Derek attended a workshop where the speakers discussed soil biology as if it was a commodity. It was hard to wrap the mind around this concept. When microbiologist and founder of Soil Food Web, Elaine Ingham, spoke on being able to identify and quantify soil life, Derek’s ears perked up. He was excited at the possibility of a new way to evaluate soils and calculate the value of what he and Tannis had worked so hard to build in recent years. 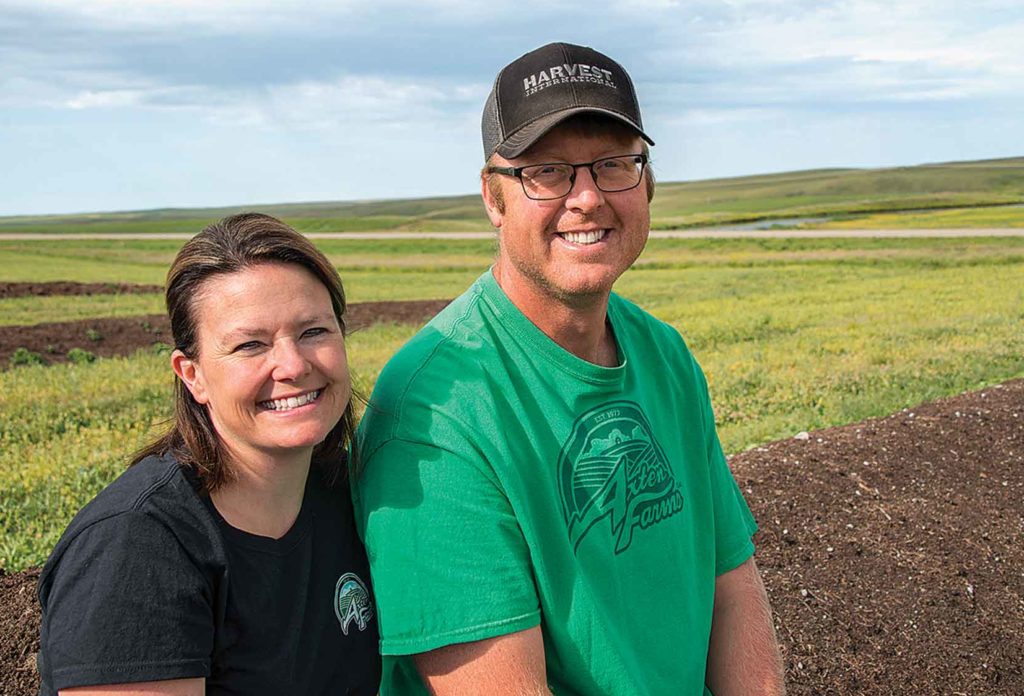 Tannis and Derek Axton make their own compost, compost extract, and compost teas.

Ingham offered an on-line “Life In The Soils” class. Students would learn to identify soil microorganisms and how they function with each other and in the soil. It was a perfect fit for Tannis, who is also a biology teacher.

“He said I could get a microscope, so I signed up for the class right away,” she laughs.

When she put their soils under the glass, however, the laughs dried up. They were greatly discouraged to find a bacteria-dominated soil microbiome.

“I expected to see all of this diversity, all these organisms,” Tannis says. “It was very disappointing.”

She’d learned a healthy soil should be host to a diverse mix of aerobic organisms—bacteria, fungi, protozoa, nematodes, and microscopic arthropods.

They’ve since seen how such a mix is, in fact, good for crops.

“If I take a soil sample next to a really nice, thriving plant I’ll find very diverse soil biology. But if I take a sample next to a plant that is doing poorly—maybe it’s growing next to our tram line where there’s more compaction—I find less diversity and more anaerobic soil life,” Tannis says.

A plant rooted in a soil richly populated by a variety of microorganisms does better because of how they all work together. 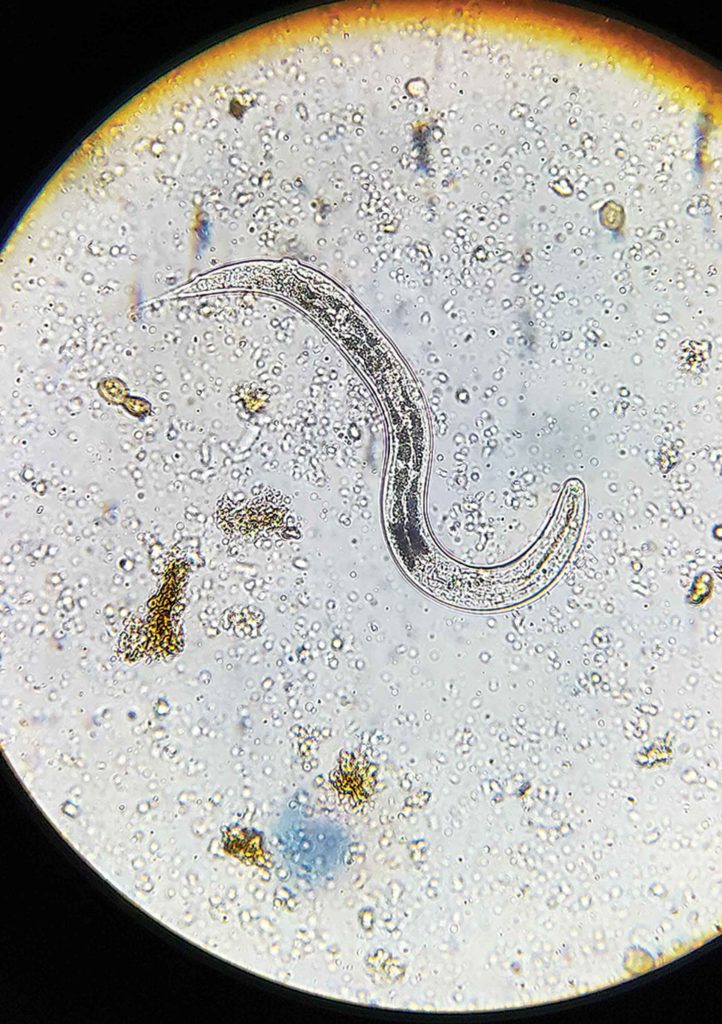 Building life. The disappointing view through the microscope eyepiece sets the Axtens down a new path. The 30 years of tillage, high fertility inputs, and use of chemicals before they shifted to a more regenerative style of agriculture, had decimated their soil life. They didn’t seem keen on self-replenishing, so the Axtens decided to give them a boost.

Tannis’ next class was on making compost, compost extracts, and compost teas. Their soils were about to get an infusion of life.

Soon they had windrows of compost cooking away. They make enough compost to spread 2 tons per acre on 1,000 acres per year.

The compost delivers organic matter, nutrients, and a healthy dose of diverse microbes.

“It’s great because the biology is already in a good environment in the compost. We know it will survive and get washed into the soil,” Tannis says.

That’s great for the 1,000 acres that get compost, but the Axtens wanted to build soil life on all their acres. To stretch the benefits of their compost program, they started making compost extract.

The Axtens use the fertilizer setup on their planter to apply 6 gallons of extract per acre at planting. The active biology acts as a biostimulant, signaling to the germinating seed that it’s in good soil.

“We’re sort of lying to the seed a bit, but it helps the plant to grow. It pumps out more root exudates, which brings in more soil biology. It’s sort of priming the pump,” Derek explains.

Tannis is in charge of making the extract. She evaluates several compost windrows, selecting those with a thriving, diverse life.

Compost is added to four, 5-gallon cheesecloth-like socks, which are suspended in the top of a 2,500-gallon, aerated tank of water. Aeration serves to wash the biology out of the compost.

“You don’t have to make your own compost to do this,” Tannis says. “It’s a fairly simple setup, and you can buy the compost.” 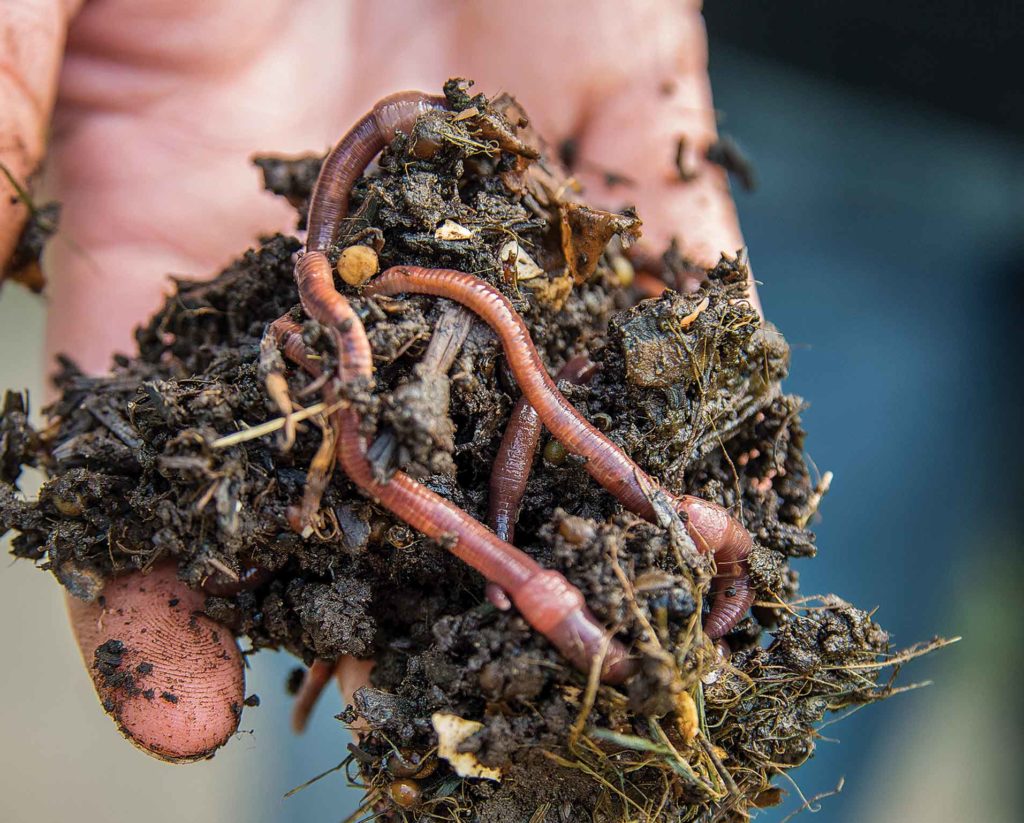 The Axtens attend as many food and consumer conferences as they do farm shows as focus shifts to soils.

The product is stable, with aeration, for several days. Aeration helps select for the aerobic, beneficial lifeforms. But their life cycle is fast, think hours not days.

“When we first started, I had extract in a tank that wasn’t being aerated because of equipment failure. I checked and it was full of ciliates that thrive in anaerobic conditions,” Tannis says.

She was set to dump the whole load but reached out to Ingham. “She said to just get air in there. We started circulating it, and within an hour, the ciliates were essentially gone, and I saw more beneficial protozoa back.”

The experience was eye opening.

“It showed us you can pump all the biology you want into the soil, but it has to constantly have the right environment to thrive and build in your soils,” Derek says.

Making their soils a welcome home for microbes has become their goal. They’ve even adopted the motto of “Loyal to the Soil.” Impact on soil life is considered for every action taken.

Cleaning up. Intercropping prompted the Axtens to take their first steps into seed cleaning. They invested in a mobile seed cleaner to separate their many high-value intercrop harvests, such as chickpeas and flax, camelina and lentils, forage peas and mustard.

Cleaning seed opened markets such as growing certified seed, but their shift to regenerative, soil-centered management opened even more markets.

Food companies are interested in sourcing ingredients from farms using regenerative practices. The Axtens have connected with one of those companies and hope to provide them with grain.

As science works to make the connection between active soil life and the production of higher nutrient density grains, the Axtens see even more potential.

“When we went down this road, it was to improve our land equivalency ratio. To be more profitable. Instead, we completely changed the direction of our farm. Who knows what’s next,” Derek says.