The sound of insects buzzing around nearly drowns out the noise of the semi trucks barreling down busy U.S. Route 52 in Vermillion Township, Minn.

“When we started farming here five years ago, this spot was a gully,” says Hang, referring to a steep section of the field, all of which was conventionally farmed previously. “We knew that once the rain hits that hill, it was going to wash out.”

Hang and the farmers immediately worked to address the erosion problem, but they didn’t want to just fix it. They wanted to improve it.

Lucas Altwegg, USDA/NRCS soil conservation technician, says, “The fact they came to us and said ‘we’ll take that out of production, put a buffer in, and never crop it’ is amazing to me. Two acres is a pretty good chunk they are giving up for the environment.” 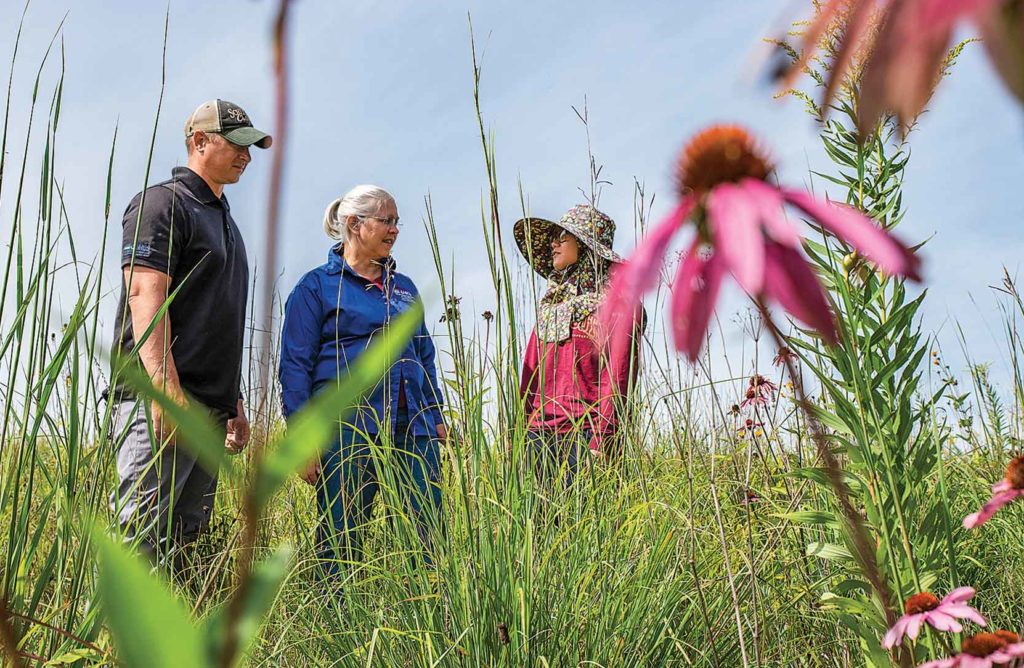 The Hmong American Farmers Association is a group of Minnesota vegetable growers farming 125 acres, mostly by hand, in 5-acre subdivided plots. Together with Lucas Altwegg and Michelle Wohlers of the USDA/NRCS, they have developed part of their land into pollinator habitat.

Together they seeded two highly erodible areas with a mix of smooth bromegrass, timothy, perennial rye, and alsike clover. Then they planted more pollinator-friendly grasses and flowers in buffers alongside the waterways and restored a wetland area on the western edge of the property closest to the Vermillion River.

This seeding occurred before Minnesota revamped their law requiring buffer strips up to 50 feet along lakes, rivers, and streams and 16.5 feet along ditches.

The math didn’t work out in the farmers’ favor either. They earn $5,000 to $8,000 per acre on their produce, but they only receive a few hundred dollars per acre through CRP payments.

Why do it? The beautiful monarchs, colorful wildflowers, and wispy prairie grasses are not just nice to see after five years of conscious conservation efforts. They are doing good for the farm.

“Especially this year with so much rain throughout the season, we are glad we decided to set aside these acres,” Hang says.

They felt like they have been receiving more rain each spring, which turns out to be true.

According to data from the nearby Minneapolis-St. Paul International Airport weather station, May 31 year-to-date precipitation totals have averaged 23% higher rainfall than the historical average in the years since HAFA started farming the ground.

The USDA/NRCS team says the Hmong show exactly why any farmer should put their poorest land into beneficial habitat, since it lacks return on investment.

“This is a perfect scenario for CRP. You shouldn’t be cropping this, even though it has easily been done in the past,” says Altwegg. “It’s hard to park a plow you’ve used for generations, but the people downstream have something to say about it. Can you really keep farming that land like before and afford to send away topsoil and nutrients for $3 corn?”

Who are the Hmong? They are a migratory culture from Southeast Asia. Many came to the U.S., and specifically Minnesota, as political refugees after the Vietnam War. Since then they have revitalized the Minneapolis and St. Paul farmers markets and introduced Asian flavors into an otherwise Scandinavian palate.