Evaluating cover crops, like anything else in farming, is all about the Benjamins—as in Ben Franklin, whose face appears on America’s $100 bill. Benjamins may be elusive in a field of cover crops, but you can find them with a little help from a herd of cows.

A recent study of eight farms in Minnesota and Iowa calculated the average annual value for cover-crop forage at $123.06 per acre. That compares with an average benefit of $3.06 per acre for reduced soil erosion. This ambitious project, funded by a three-year Conservation Innovation Grant from USDA, was carried out from 2015 to 2018 by a partnership between The Pasture Project, Practical Farmers of Iowa, the Sustainable Farming Association, and the Land Stewardship Project.

Researchers tracked the economic and soil health benefits when cover crops were grazed
using adaptive high-stock-density management. “This study looked at the economic value of ecosystem services provided by cover crops,” says Meghan Filbert, livestock coordinator for Practical Farmers of Iowa. “There were economic benefits for such things as soil fertility and soil water holding capacity, but the largest economic benefit came from the grazing component.”

Stretch stalks. Mark Schleisman with M&M Farms in Calhoun County, Iowa, credits those economic returns with keeping cattle profitable on this family operation. “The use of cover crops has cut our feed costs for the cow herd by about one-third,” he estimates. “Cover crops provide a high-quality forage that allows us to get more value out of crop residues.  We have seen 22% or more crude protein when we take forage samples of our cover crops so that cuts down our need for protein supplement as well.” 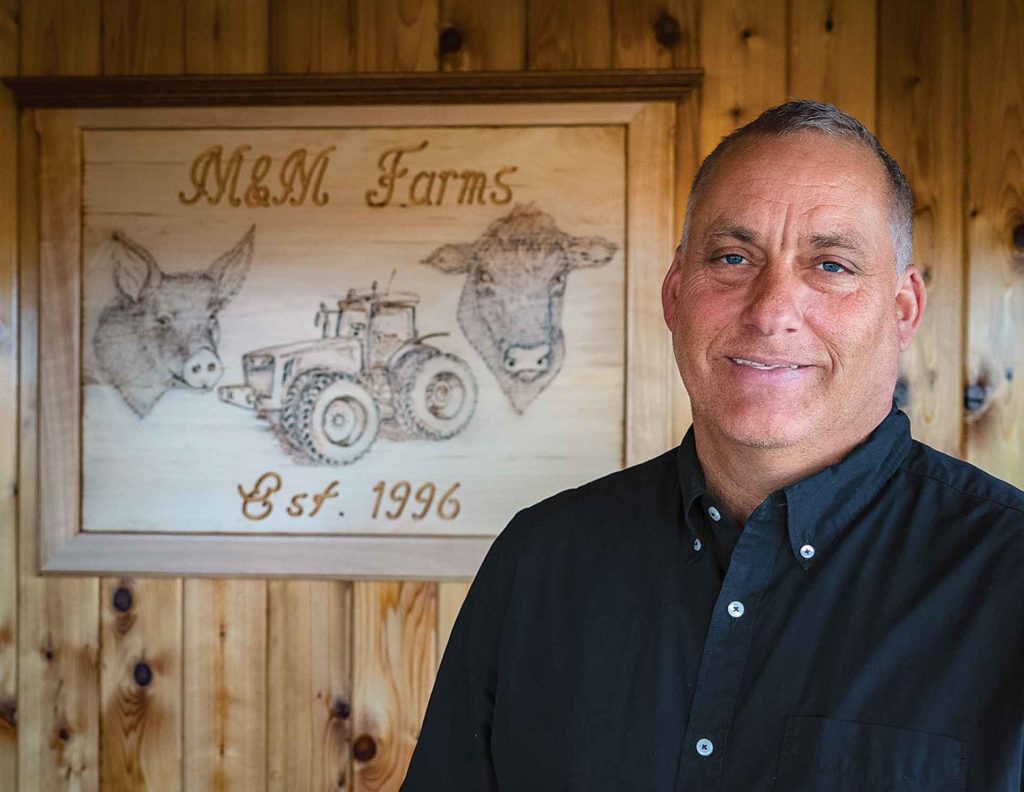 The farm’s 360 cow-calf pairs typically graze cornstalks after harvest. Schleisman says the additional forage from cover crops extends the stalk-grazing season. “When there’s a good cover crop growing in a field, cows tend to work through the snow to continue grazing,” he adds.

M&M Farms first experimented with cover crops and grazing in 2010 on 70 acres. The farm now incorporates more than 1,300 acres of cover crops and grazes the majority of those acres; some are harvested mechanically for silage. Cereal rye is the backbone of the cover-crop program, selected initially as a species ideal for making spring calving pasture. Now the farm uses a mix of oats and rye for fall grazing. If crops come off in time, they add other species into the mix, such as oilseed radish, turnip, and rape.

Schleisman participated in a Practical Farmers of Iowa research study beginning in 2015. The farm is in the North Raccoon River watershed, an area under scrutiny for water quality. Studies show cover crops to be effective at improving water quality, cutting nitrogen losses by 31%, and reducing phosphorus loads by 50%. What caught his attention, however, was a savings of $70 per cow in feed cost when grazing cover crops. “By our numbers, we are getting a 3X return over our costs in the short term by grazing those cover crops,” Schleisman says. “We’re also getting the long-term soil health benefits.”

Inconsistent crop. Cover crops can provide ecological services and livestock feed, but they also can be a source of frustration. “We’ve seen dramatic variations in weather and cover-crop growth at our research sites,” says Dan Loy, director of the Iowa Beef Center at Iowa State University.

Researchers at ISU are honing in on what farmers can expect for an average year, and the amount of variation they might expect to see in a cover crop. The early findings showed forage yield of nearly four tons of dry matter per acre following corn silage, but as low as 200 pounds per acre after full-season crops.

Despite the variation, Iowa is counting on cover crops as a significant component of the state’s nutrient reduction strategy to protect water quality. The state hopes to achieve four million acres or more protected by cover crops. “We’ve typically exported calves and imported yearlings,” says Iowa State researcher Erika Lundy. “If this much forage becomes available for stocker cattle, we might be able to keep more Iowa calves here in the state before they head for the feedlot.”