The Texas Hill Country is a 17-county, 11 million-acre chunk of central Texas that has become one of the hottest getaway destinations in North America. While most visitors are drawn to the area by its wildflowers or wine, many leave with a sense of the special atmosphere that prevails. In the Hill Country, cultures and lifestyles—which range from cowboy churches to Tuscan-style wineries—all blend together. Mix in country music, pit barbecue, strong mid-European heritage, and a rolling landscape that blazes with native wildflowers, it’s easy to see how the Hill Country captivates seven million fans annually.

That fascination starts with the wildflowers that blanket the hills and line the roadways.  More than 5,000 species of wildflowers grow in Texas, but locals and visitors alike are most enamored with the bluebonnets—the Texas state flower. “The wildflower season is from mid-March through the beginning of May, and there’s always excitement waiting for the first blooms to appear,” says Amanda Koone, communication director for the Fredericksburg Convention and Visitor’s Bureau (www.visitfredericksburgtx.com). “Several social media sites follow the progress, and when it peaks, roads in the Hill Country are choked with cars as people take in the explosion of color.”

The bluebonnets are joined in the spring plethora of color by bright red-orange Indian paintbrush, Indian blanket, coneflowers, and other species. Still more species take over in the summer and fall. Mother Nature is largely responsible for the wildflowers, and she worked alone until the 1960s when the Texas Department of Transportation began seeding 30,000 pounds of wildflower seed per year along roadways. That effort was spurred on by Lady Bird Johnson’s Highway Beautification Act of 1965, which planted wildflowers across the U.S., but especially in her Hill Country home. 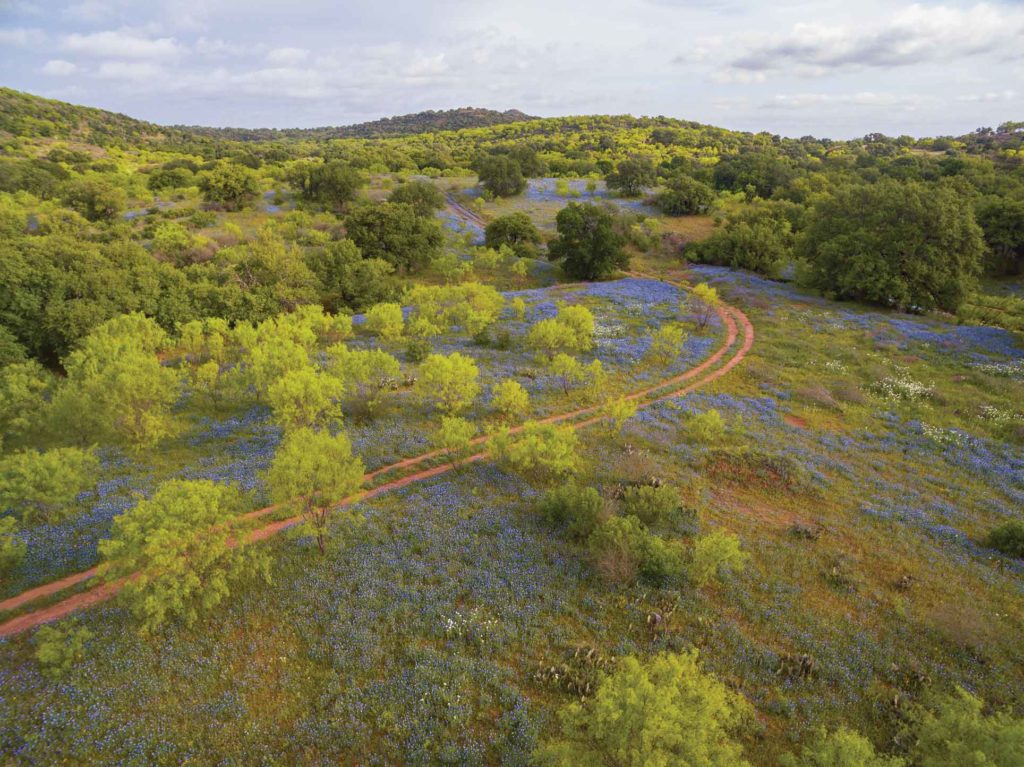 Wildflower enthusiasts monitor various wildflower watch websites (www.hillcountryportal.com) and the Texas Wildflower Report on Facebook for a heads up on when and where to find the best displays. Rich Olivieri, author of the Wildflower Haven website (www.wildflowerhaven.com), publishes regionalized eBooks that predict the wildflower bloom using fall and winter rainfall and provides route maps to assist travelers. Photo galleries on the site whet wildflower lover’s appetites with more than 2,200 bluebonnet images.

Take wildflowers home. Wildflowers drew Houston, Texas, turfgrass producer John Thomas into the wildflower seed business in 1983 and to the Hill Country in 1997. “We produce seed for 41 different species of wildflowers on 217 acres near Fredericksburg, Texas, and roughly 800 acres near Houston. We’re the nation’s largest working wildflower seed farm, and we produce from 70 to 95% of the world’s supply of some wildflower species,” says Thomas.

Wildseed Farms is a major tourist draw to the Hill Country. Wildflowers are planted in carefully maintained rows with walking trails, where approximately 400,000 annual visitors enjoy the walk and pause for photos. “We also contract with growers from across the country and around the world to produce seed for us, and we harvest wildflowers right out of many ranch pastures across Texas,” he adds.

Regionalized packages of wildflower seed blends are sold online (www.wildseedfarms.com) and through the gift shop at Fredericksburg. “People from all over want to grow bluebonnets, but they’re not adapted to areas beyond Texas and Oklahoma. Most are surprised to learn that wildflowers are fairly difficult to grow and it’s taken Mother Nature thousands of years to perfect it,” adds Thomas. 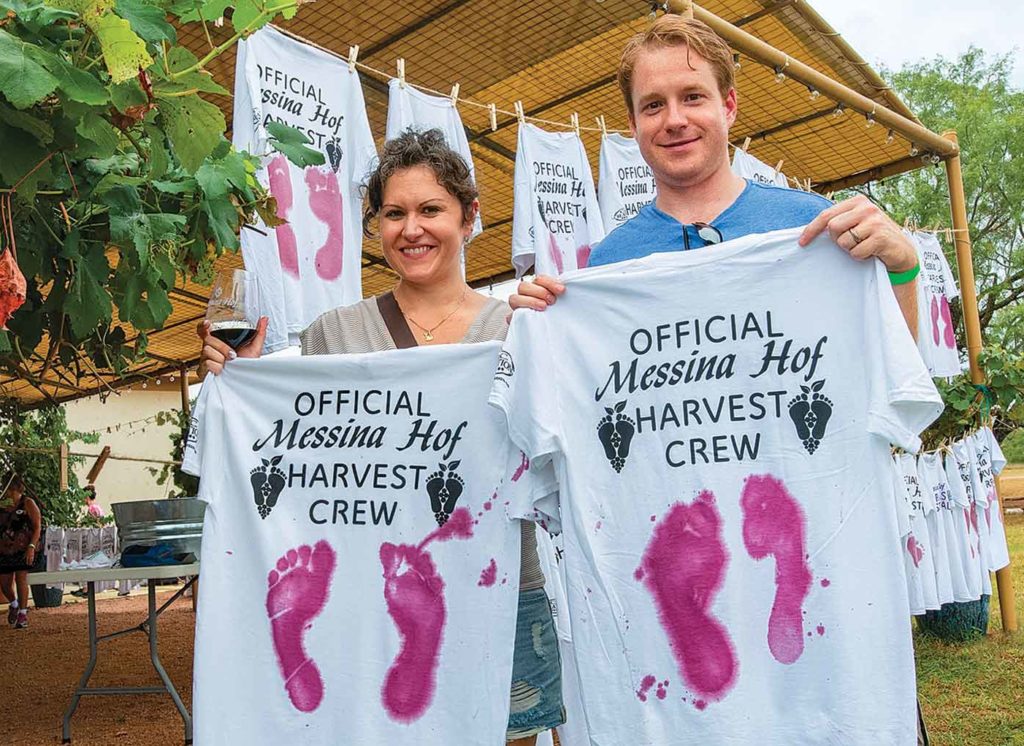 Wine time. Wildflowers aren’t the only thing budding in Hill Country—it’s also emerging as one of the top wine regions in the U.S., and has been dubbed the ‘New Napa’ and one of the ‘best wine travel destinations’ by several national publications.

The Hill Country boasts more than 50 wineries today compared to just eight that formed the Texas Hill Country Wineries association in 1999. Each winery has its personality, environmental character (terroir) and production style. These range from the ‘Tuscany in Texas’ elegance of Grape Creek Vineyards on Fredericksburg’s hectic Wine Road 290 to the rustic ‘working ranch’ aura of Torr Na Lochs Vineyard and Winery, located at the end of a ‘leisurely half-mile drive on a granite gravel road’ near Burnet, Texas.

The number of ancillary businesses has grown with the wineries. “Visitors will find a dozen wine tour and wine shuttle companies in Fredricksburg alone,” says Koone. A recent study by her organization found that 32% of the visitors to the area noted ‘touring
wineries’ as one of the top reasons to visit—a big increase compared to 11% in 2000.

While wine tasting at Hill Country wineries occurs year-round, other activities pick up during the July to August harvest season. Many wineries host harvest festivals, ‘a harvest tradition that honors the bounty of the vineyard,’ according to Paul Bonarrigo, CEO of the Messina Hof Hill Country winery, which he opened in 2011. Bonarrigo is a seventh-generation winemaker whose family traces their passion for fine wine back to Messina, Sicily.

Harvest festivals at Messina Hof can include a Blessing of the Vines, grape picking, grape stomping, and a vineyard-themed lunch or dinner. “It was a great time and the highlight of our trip,” report Henryk and Britton Noble-Orlik, who came away last August with a souvenir t-shirt showing their wine-stained footprints. 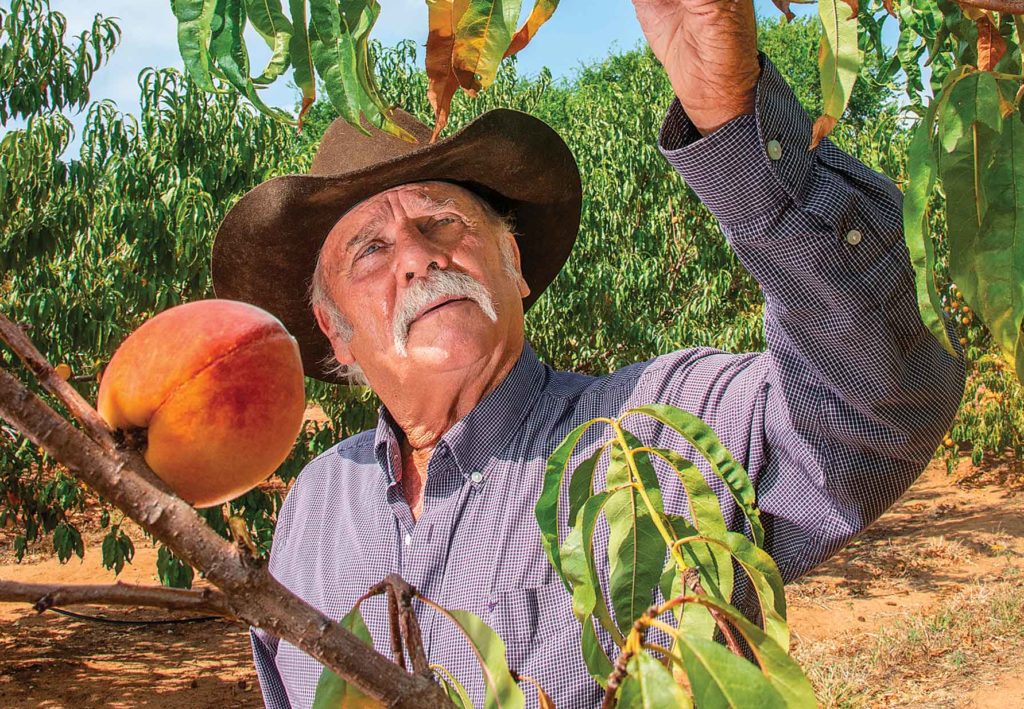 Tourists following wine trails through the Hill Country may intersect a Hill Country Beer Trail (www.hillcountrycraftbeertrail.com). The region’s German heritage seeps out in dozens of small craft breweries and is openly displayed at Altstadt Brewing near Fredericksburg. Beer is brewed in strict compliance to a Bavarian Purity Law, dating back to 1516, which requires all ingredients (even the water) t0 come from Germany. To comply, owners use reverse osmosis to remove the minerals from local water and add back minerals common in water from Germany.

A place for peaches. Peach orchards are also elbowing for room in the often hectic Hill Country scene. “The wineries and vineyards have made it tough to compete for land, but they do bring in the tourists who buy a lot of peaches, so it’s kind of a mixed blessing,” says Travis Jenschke, who’s been producing peaches since 1961.

The Jenschkes trace their Hill Country farming roots back seven generations. Their Fredericksburg, Texas, orchard—now operated by son Barrett—features 26 varieties of peaches grown on more than 5,000 trees.  “We sell peaches at our roadside stand and offer U-pick opportunities from mid-May until August. Fredericksburg peaches are renowned for their quality, but the number of growers in our local fruit council (texaspeaches.com) has fallen from 30 to just 14 in the past twenty years,” says Barrett.

As peach growers have found, the growing popularity of the Hill Country does present some challenges.Farming and ranching are still the primary industry in two-thirds of the counties in the region. Many of those concerned about the resulting impact of unplanned development on the area’s water resources, multi-ethnic and agricultural heritage, and spectacular scenery have joined forces in the Hill Country Alliance (www.hillcountryalliance.org).

The alliance points out that Texas is second only to Florida as a retirement choice and that the Hill Country is a premier destination. The population is growing rapidly, and a recent analysis pointed out that the resulting per capita land consumption was 4.4 acres. The fragmentation of farms and ranches, disruption of wildlife, water shortages and water rights speculation, and light pollution are all areas of concern.

The culture and heritage that may be in peril are evident in services at the Cross and Spur Cowboy Church in Buchanan Dam, Texas. Pastor Johnny Sawyer sometimes preaches perched on a bale of hay; nobody takes their cowboy hats off at the door, and the youth program features a rodeo arena instead of a volleyball court. 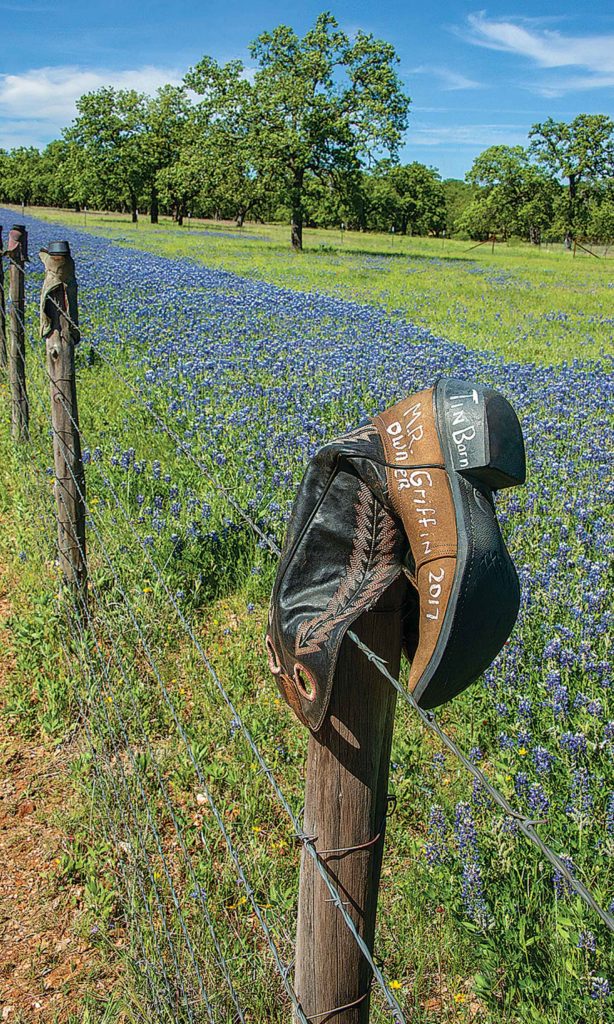 A 13-mile drive on the heralded Willow City Loop offers scenery of wildflowers as well as a unique cowboy boot fence.

“Not everybody owns a horse or wears a hat. But we think bull riding, team roping, and other aspects of western heritage are great ways to reach people,” says Sawyer, who operates his own Hill Country ranch.

Hill Country heritage is also on display at the Gillespie County Fair—the oldest in Texas—where cowboy hats and belt buckles are in full fashion.

It’s also shown in the slogans used by many of the area’s 51 towns. Bandera champions itself as the cowboy capital of Texas and backs it up with two rodeos a week. Meanwhile, Dripping Springs claims to be both the wedding capital—with 35 venues—and the distillery capital of the state. Then there’s the infamous town of Luckenbach, where ‘everybody is somebody’ in a town with a population of only three. Perhaps nowhere in the Hill Country is culture more evident than in German-centric Fredericksburg. Founded in 1846 by German settlers, it sports more than 700 preserved structures influenced by that heritage, including some iconic ‘Sunday Houses.’

Koone explains that when the town was founded, settlers were awarded a lot in town and ten acres in the country. “It was assumed farmers would follow the European tradition of living in town. But instead, they built their main homes on the farm and small, single-room houses on the lots as a place to stay when they came to town for supplies, to socialize and attend church. Thus, they became Sunday Houses.”