Maggie McQuown’s childhood home was a tall, two-story Victorian farmhouse with a panoramic view of the East Nishnabotna River valley. She’s back home now, retired to her family homestead near Red Oak, Iowa, and the view is still great. But Maggie and her husband, Steve Turman, enjoy those views from a considerably different kind of farmhouse they built in the shadow of the 120-year-old Victorian version.

“The old farmhouse was well-built in its day,” Maggie says. “But we just didn’t think it could be renovated to be as energy efficient as we wanted.”

New era. This story is more than about two houses; it is a tale of transition from one era in agriculture to another. Maggie’s great-grandparents, John and Retta Taylor established the farm and built the expansive, five-bedroom farmhouse at the end of the 19th century. The family believes construction on the house began in 1899. The Taylors named their operation Pleasant Prospects Farm, reflecting the optimism of seemingly unlimited resources on the western Iowa frontier.

The farmhouse served as a nucleus for a succession of family members, including Maggie’s grandparents and parents. She attended Iowa State University and then headed to the big cities of New York, Chicago, and Dallas. Her 37-year career in the fashion industry, which branched into work with marketing, advertising, and fundraising, took her away from the land. “I lived in cities, but my love for the farm
remained strong,” Maggie says. 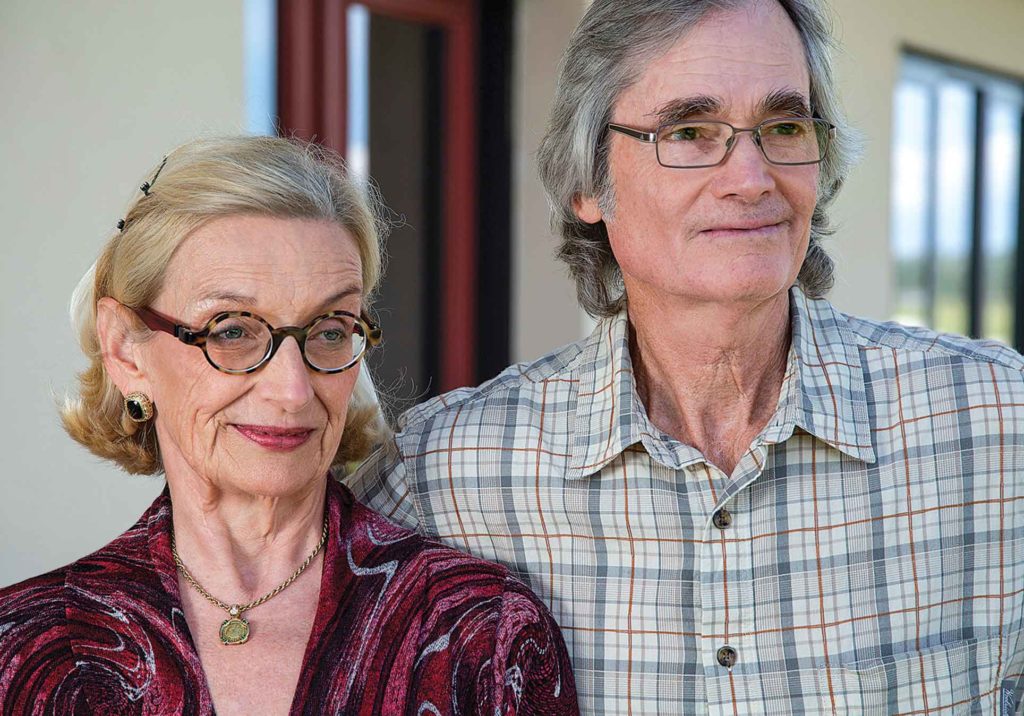 After her mother passed away in 2008, Maggie and her siblings inherited the farm. In 2011, Maggie was diagnosed with cervical/facial dystonia, a medical condition that convinced her and Steve to retire back to the homeplace. They came back in 2012 with a new direction in mind for the farm. “We renamed it Resilient Farms,” Maggie says. “We think that name better reflects the current situation and the challenges we face in managing our farmland for the future.”

Minimal impact. The farm has long been known for its pioneering efforts in conservation. Terraces and an evergreen windbreak were built in the 1920s, but  Maggie and Steve are pushing even harder. They have added grassed waterways, restored prairie, and built a riparian buffer along a creek that runs through the farm.

Steve points out that this active approach to sustainability eventually convinced the couple to build a farmhouse based on the German design concept called Passivhaus. “We see that our biosphere has limits,” he says. “We are beginning to experience those limits, threatening the web of life that we take for granted.” Guided by that thought, Maggie and Steve set out to build a retirement farmstead with minimal impact on the landscape and minimal use of the earth’s resources.

In simplest terms, a Passivhaus is an ultra-low user of energy with a minimal ecological footprint. Maggie and Steve did their homework, studying passive solar house designs. Then they contacted architect James Plagmann, a former Iowan living in Colorado, who worked with them to design a south-facing, earth-bermed home. 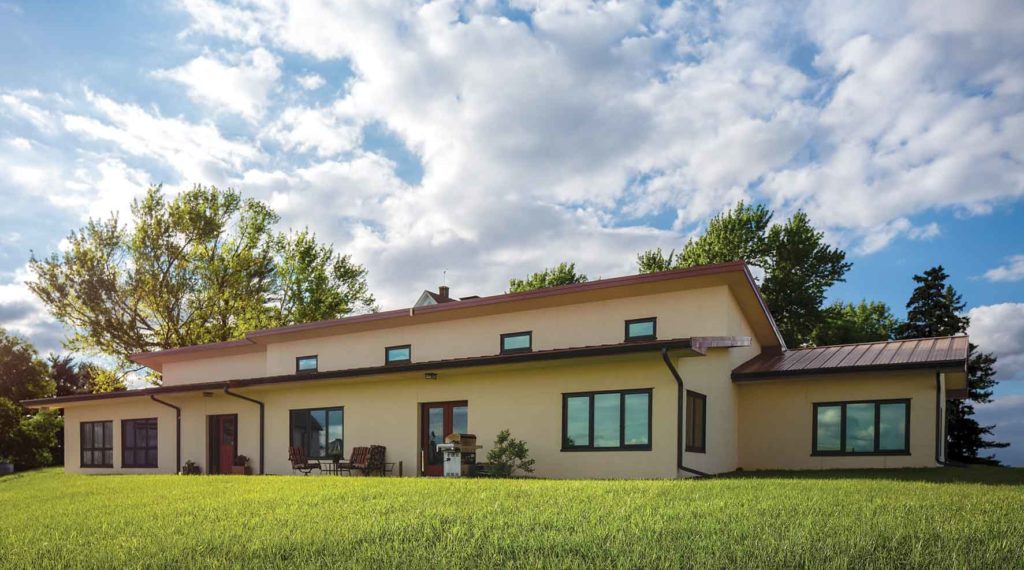 Inspired by the Passivhaus concept, this new farmhouse faces south and is earth-bermed for maximum efficiency.

“Farmers have always understood the land and been in touch with nature,” says Plagmann, who operates the HumaNature Architecture firm (humanaturearch.com) that specializes in green building design. “This house reflects that understanding. It stretches out on an east-west axis, allowing passive solar gain through south windows in the winter months. In the summer, overhangs shade the windows to prevent direct solar gain.”

Concrete walls and a concrete floor provide mass that results in a “thermal flywheel” effect, slowing temperature changes in the house. All insulation is on the outside of the concrete, carefully constructed to avoid penetration into the stucco-like finish of the exterior walls. “The house is constructed a lot like a thermos jug,” Steve quips.

Hidden gems. All this planning sounds utilitarian, but the house is anything but bland. High-tech features help in heating, cooling, and ventilating the home. Maggie’s creativity and Steve’s carpentry ability teamed up for stunning interior design.

The new home pays homage to the past in many ways. Hand-hewn posts, salvaged from a barn on the farm, support the main engineered beam. The dining room chandelier was made from light fixtures salvaged from the Victorian house—and rewired for energy-saving LED bulbs. Since the sealed home is super efficient, Maggie and Steve incorporated an energy recovery ventilation system that keeps fresh air circulating through the house. A heat exchanger in the device allows energy to be extracted as exhaust air leaves the house.

Radiant hot-water floor heat helps supplement the passive solar gain in winter. A super-efficient water heater, which uses a heat pump to draw energy from the air, sends water through a manifold system into pipes that warm the concrete floor. 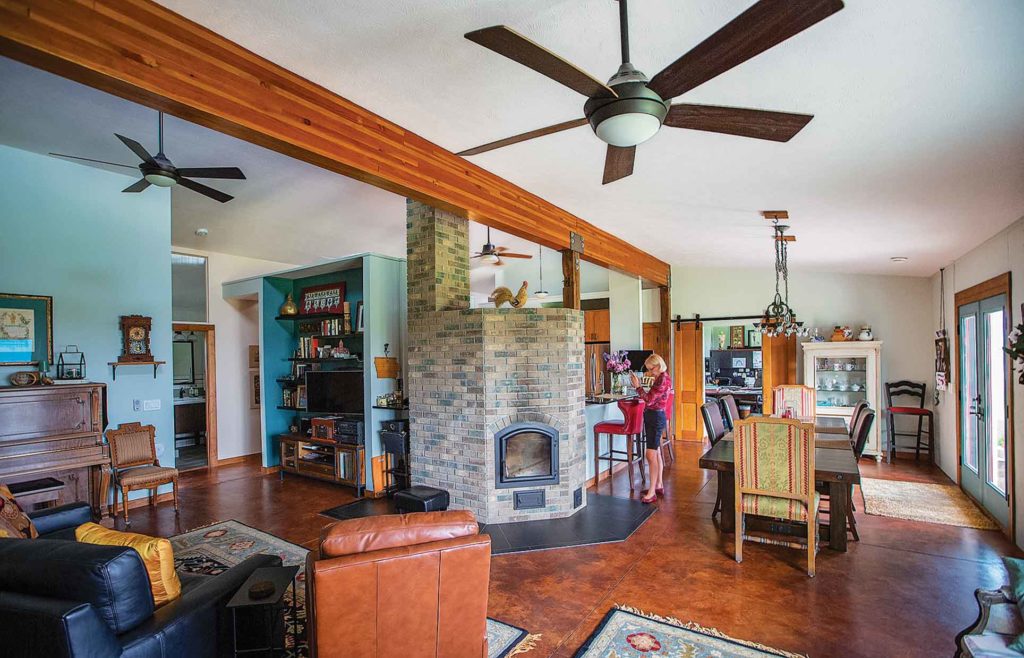 An open floor plan makes maximum use of natural light.

For added winter warmth, wood heat from a Finnish-designed masonry stove takes off the morning chill in the kitchen and open living spaces.

Light it up. The house has most of its windows on the south side. A double shed roof design allows space for clerestory windows, placed high to allow natural light to reach well into the open floor plan of the interior.

When artificial light is needed, some of that power comes from the sun. In 2013, the couple completed a 16-panel solar array near their large farm-to-market garden south of the house. It feeds a bi-directional meter, and supplies about 40% of the electrical needs of the homestead.

While Maggie and Steve lease the row-crop acres to a tenant, they grow produce for a local farmers’ market. They use one room in the new house as their greenhouse and workroom. A concrete-block wall filled with sand divides this “mudroom,” allowing for additional thermal mass. Large windows on the south wall team with grow lights in the ceiling and on plant shelves to make a great place to start seedlings for the garden—or to grow microgreens for the farmers market.

Maggie’s office in the new house has a prime view of the valley that she calls home and the land that she and Steve want to protect. “We’re focused on long-term resilience,” she says, looking over the vast, green landscape below. “We’re looking to the future.”