No cake! No cheese! No ice cream!

Sabrina MacTaggart believed it was lactose intolerance that kept her from drinking milk or eating foods that contained dairy for most of her life. That changed in July 2019 when she took her children on a tour of Sheldon Creek Dairy, a local on-farm dairy processor near Alliston, Ontario. The visit changed her life.

Contrary to what she’d believed since she was 11, MacTaggart found she could drink one type of milk. While her digestive system can’t tolerate milk that contains the A1 beta-casein protein, it has no issues at all digesting milk with only the A2 variant.

Milk is composed of water and a mixture of milk solids that consist of lactose, fats, minerals, and proteins. A single U.S. quart contains about two teaspoons of one or more varieties of the beta-casein protein, according to Wikipedia. Non-cow milk (including human) and cattle from Asia and Africa mainly contain the A2A2 variation. But due to a past mutation that occurred in the dairy herd, most cows’ milk in the western world has the A1A2 variant.

Digests differently. The two proteins are almost identical, but cellular studies show that the human digestion system treats the two proteins slightly different. In Sabrina MacTaggart’s case, this slight variation in the protein molecule was enough to determine whether her system could tolerate it or not.

A2 milk was pioneered in Australia and New Zealand at the turn of the century, says Marianne Edward with Sheldon Creek Dairy. Her sister, Emily de Haan, heard about it when she was working on an Australia dairy at the time and brought the concept back to the family’s dairy with her. They kept an eye on the A2 milk growth trend and delved more into the scientific research on it.

“We realized that there was an opportunity to do this here because we could do small-batch, on-farm processing,” Edward says. “It’s a niche market because most people don’t know about the product. But we could control the product from start to finish, and ensure that no A1 protein is found in the milk.”

The first step on the family’s journey was to enlist Holstein Canada to test their cows for the A2A2 variant. Edward says the test is a little like the genetic test kits that help people determine their ancestry. They started to breed the cows to A2A2 bulls in 2014 exclusively. It’s just like the human gene for red hair; if both parents don’t carry the gene, it’s impossible to have a red-headed child.

Retaining genetics. When some dairies decide to produce A2A2 milk, they sell off their entire herd and start fresh with just A2 cows. But the de Haan family loved their cows. They’d achieved Master Breeder status for their herd’s genetics, so it didn’t seem right to them to sell off their pretty cattle just because they didn’t have the correct gene. Fortunately, their timing was perfect; they were in the process of building a new robot barn and found that they could keep both. 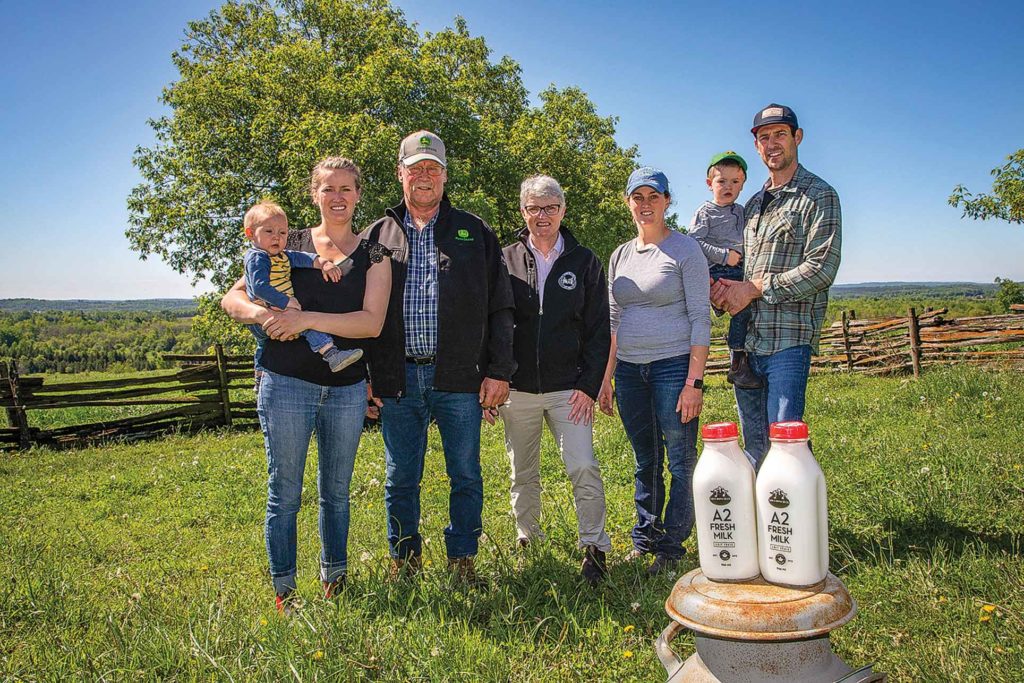 The de Haan family researched the science behind A2 milk and decided that it would be a great addition to their product line.

All milking robots can segregate milk from animals being treated with antibiotics. The family worked with their local Lely dealer to ensure their robots were programmed to direct milk from A2 cows into a separate bulk tank through segregated lines. The robot detects whether it’s an A1 or A2 cow using the neck transponder on the cow about to be milked and automatically routes it to the right tank.

“The technology meant we didn’t have to segregate the cows,” Edward adds. “We wanted them to still live in a communal space. Cows are animals of habit. They like the same thing day after day and want to hang out with their friends. Our barn has a highly efficient design, but it’s still based around the happiness of the herd. The cows’ happiness comes first.” 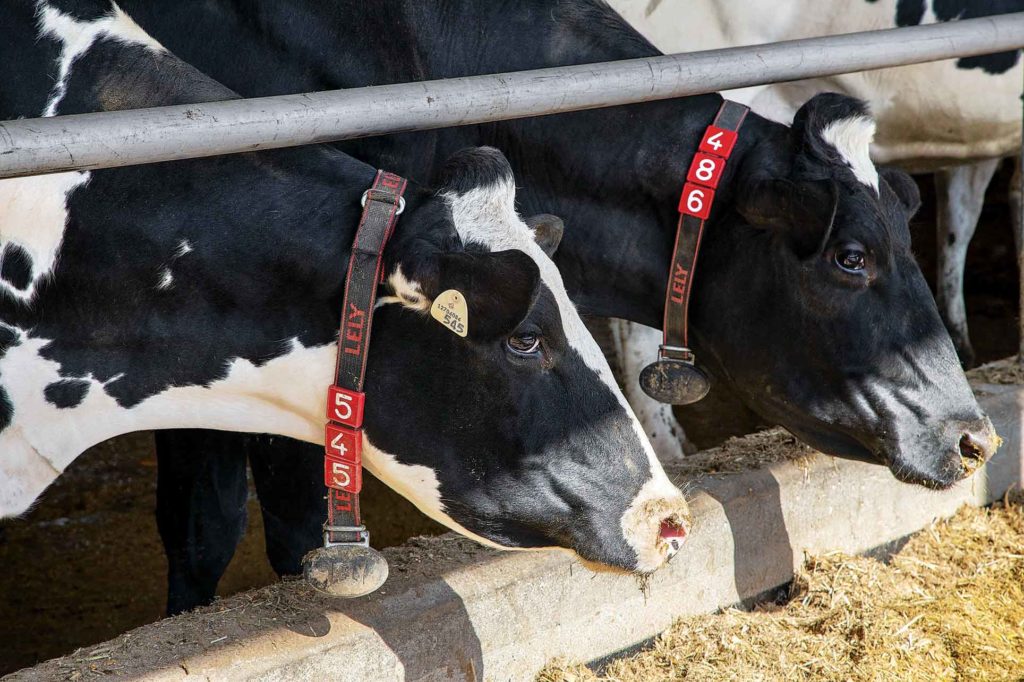 The neck transponder on the cow to be milked will let the robot know if it’s an A1 or A2 cow.

The family’s first A2 production run in February 2019 was very small, just 300 liters. They established protocols that treated A1 milk like it was an allergen, Edward says. They process their A2 milk on a separate day, so there is no chance that the two types of milk could be mixed in the lines.

Sales started slowly, and marketing the A2 milk presented a challenge. Their target customers were adults who stopped drinking milk because they believed it made them sick. Fortunately, interest took off after a television show on the W Network did a segment on A2 milk.

Customers went online to see where they could purchase A2 milk in Canada, and Sheldon Creek’s phone started ringing.

Edward says they notice there’s an increase in interest every time another program airs or another magazine article on A2 milk is published.

“The nice thing about this product is it’s not like the plant-based product that diverts people away from milk,” Edward says. “If anything, it’s bringing in a whole new group of customers. They want to put milk in their cereal or try a latte without having to worry if it’s dairy-free or not.

Sabrina MacTaggart sure is happy. She’s now using A2 milk to make recipes she could never tolerate before. Her next feat, she says, will be to use it to churn her own butter.