No-till is more than just a farming practice for Manoel Henrique Pereira Jr. It’s a family tradition. It’s the reason thousands of farmers from Brazil and around the world have visited his 4,000-acre operation outside the Brazilian city of Palmeira, Paraná, over the years. It’s right there on his Agripastos Farm business card, in a big, round emblem that translates to “Planting in the straw for 40 years.”

Today, he and other dedicated Brazilian no-tillers are building their soils — and their incomes — by aggressively integrating cover crops, cattle, and cash crops. Many even seed their cover crops and corn at the same time.

Pereira likes to show two schematic diagrams to visitors. One cycle features tillage and monoculture. It’s called the Ciclo da Pobreza, the Cycle of Poverty. At the end, says Pereira, is “no land for the children — only bills to pay.” The Ciclo da Riqueza, the Cycle of Wealth, starts with no-till and crop rotation. A few yards from the screen is Pereira’s indoor museum of antique tractors. It’s not hard to see which road he’s on.

But back in 1975, when Pereira’s father visited Kentucky to meet no-till pioneer Shirley Phillips, the situation was desperate. It had been less than 20 years since the elder Pereira had established the farm by clearing native grassland with fire and a heavy disk. But his shallow, sandy topsoil was already eroding, washing away in sheets and getting scored by gullies big enough to swallow a tractor.

From day one, the ground was tough to farm. The topsoil was 8 to 12 inches deep, 70% sand, and almost void of organic matter. With a pH of 3.5 to 4.0, aluminum toxicity was a constant challenge.

Steady climb. Manoel Pereira Sr. started no-tilling in 1976. Since then, the farm’s corn yields have climbed from 57 to nearly 160 bushels per acre, and soybean and wheat yields have doubled to 60 bushels per acre. Soil organic matter now ranges from 3.0 to 3.5 percent, and steady liming has increased the soil pH to 5.5.

Manoel Pereira Jr. points out that simply eliminating tillage isn’t enough to transform the soil. He counts on constant field cover and lots of animal manure for that.

Into an actively growing stand of annual ryegrass, he plants soybeans in the spring and dedicates 120 days to the crop. After soybean harvest, the ryegrass is exposed to light again. Pereira gives the grass 60 days to strengthen its stand, then turns cattle out on the field for 120 days. When the cattle move over to Pereira’s feedlot, the grass gets 60 days to recuperate. Then out comes the soybean planter for another cycle.

The system is a huge boost to Pereira’s cattle business. His stocking rate is 4.5 cows per hectare (1.8 per acre); the average on most farms is less than 1 per hectare. 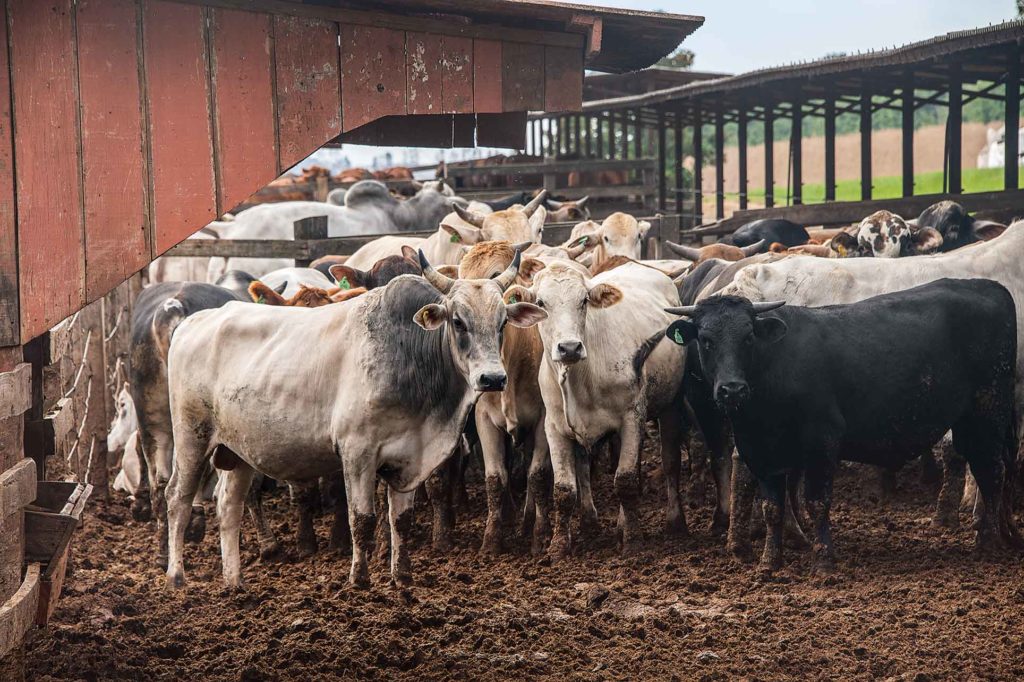 Cattle turn cover crops and cash crops into profit on Pereira’s farm, both on pasture and in the feedlot.

Side by side. Pereira also described the popular Santa Fe System, in which Brazilian farmers drill in a grass cover crop at the same time, or shortly after, they no-till their corn. In Pereira’s area — 34 degrees south latitude, which corresponds with northern Mississippi, Alabama, and Georgia — farmers use oats or annual ryegrass for the cover crop. Closer to the equator, they prefer Brachiaria, an imported African signalgrass.

Simultaneously seeding grass and corn is a bold move. A 2017 paper in the Australian Journal of Crop Science by a Brazilian research team detailed tactics used to tip the balance in corn’s favor. That process includes tight corn row spacing of 18 to 20 inches, as well as deep placement of the cover crop seed to give the corn crop a head start on germination.

Jonadan Hsuan Min Ma no-tills about 4,000 acres in Minas Gerais, about 500 miles north of Pereira, and serves as president of Brazilian No-Till and Irrigation Farmers Federation. His approach to the Santa Fe System is to plant corn in 20-inch rows at 22,000 to 28,000 plants per acre. He follows up 7 to 10 days later with a row of Brachiaria between the corn rows.

Full concept. Like his counterparts in America, Ma’s passion for no-till extends far beyond the original erosion control goals of the 1970s.

“The system of no-till is not only no-tilling,” he notes. “The full concept is to conserve the soil, adopt no-till and cover crops to keep the biological life in the soil and even the aerial (above ground) parts of the plant, and, through permanent soil covering with plants or straw, use less herbicide and less fertilizer.” 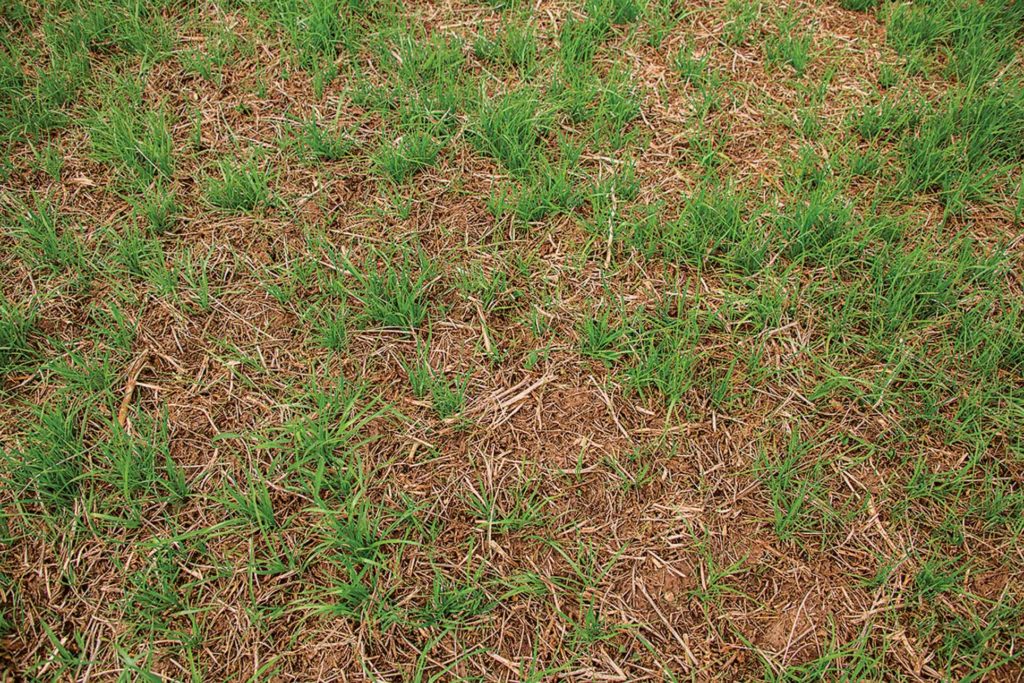 This 40-year-old annual ryegrass stand is also home to soybeans 120 days per year and serves as a cattle pasture for another 120 days.

Over the past 10 to 15 years, Ma has cut his annual phosphorus and potassium applications by two-thirds, from 1,500 metric tons per year to 500.

Ma also reports a 35% reduction in herbicide use on his farm. He is especially eager to reduce his dependence on glyphosate. The popular herbicide is facing resistant weeds as well as a bumpy path through Brazil’s courts — which banned it in 2018 — and its regulatory agency, which reinstated its use but commissioned a review of the product.

Towery has been working with growers, extension specialists, and his clients at the Oregon Ryegrass Commission on tactics to establish cover crops before the harvest of cash crops. Recent trials have focused primarily on interseeding cover crops between the V2 and V6 growth stages in cornfields north of I-70.

A major difference between Brazil and America, he notes, is that fewer American corn growers also raise cattle. That prevents them from benefiting from forage and leaves corn yields as the highest priority.

“The holy grail here was, ‘do no harm. We can’t have a yield reduction in corn,’” Towery points out. “We’re all caught up with yield, yield, yield. Perhaps profitability should be the emphasis.”