Knowing that his father’s ultimate goal was producing and processing beef, ranch to table, son Robert Rebholtz, Jr., decided to acquire a packing plant in Washington in 2003. This allowed the family business to package and sell a branded product, to ensure their high standards were met at every stage, culminating with taste.

Robert knew that if the meat processed in their new facility were up to the eating quality they expected, he’d put his father’s name on it.

Searing together the supply chain. By 2009, Agri Beef was ready to supply grocery stores with high-grade beef from their Double R Ranch brand of conventional, grain-fed animals and their Snake River Farms brand of Wagyu-cross cattle. The first to form this partnership was the high-end Lunds & Byerlys grocery store chain in Minnesota. 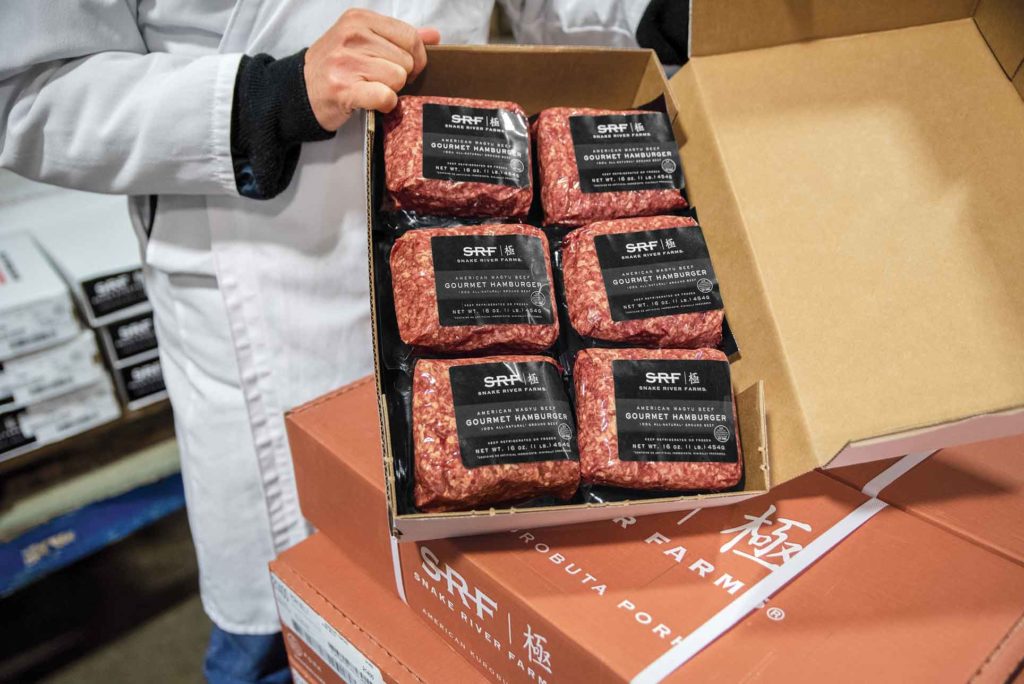 As a business also known for selling high-quality and trustworthy products, Lunds & Byerlys’ leadership was pondering whether they could improve their meat category further. They discovered that working with Agri Beef was the answer.

“It was a natural partnership because both companies are family-run and committed to quality,” says Scott Kersting, director of meat and seafood operations at Lunds & Byerlys. “And they are pretty innovative for a beef company.”

Ten years later, the partnership has remained successful because of Agri Beef’s focus on consistency and breeding for taste.

“The Snake River Farms Wagyu burger patty has been our number one selling patty for quite some time, and they produce an aged-beef product exclusively for us,” adds Kersting.

Their executive chefs developed and patented an aging process that Agri Beef produces for them.

Lunds & Byerlys CEO, the founder’s grandson, has taken the partnership a step farther. “I joined Agri Beef’s board because of the deep admiration I have for Robert, his family, and their extended family of staff. It’s important that we offer exceptional products and can proudly share the stories behind them,” says Russell (Tres) T. Lund III. “Because of Agri Beef’s commitment to quality, animal well-being, and innovation, we have a phenomenal story to share with our customers.”

Agri Beef made sure Lunds & Byerlys staff were well-informed, and able to share the story of how the beef is raised. Every Lunds & Byerlys meat manager has gone to the Pacific Northwest to see the whole operation, from genetics through processing.

Opening up the package. Providing first-hand knowledge is something Agri Beef has continued to do with customers in the retail category as well as the food-service industry. They now bring chefs, distributors, grocery store employees, bloggers, and other influencers to their remote locations in Idaho and Washington throughout the summer.

This extra effort is part industry education and part salesmanship. Either way, it is impactful.

The tour starts with the step that’s most relatable to meat counter workers: the Washington Beef processing plant in Toppenish, Washington.

Customers begin with a safety video, put on white lab coats, hard hats, and goggles, and then walk through the facility from finish to start. Vistors must start with the clean packages, then proceed backwards to the live animals for food safety reasons.

The plant managers don’t hold anything back. They point out the USDA inspectors, camera grading system, and unique windows along the cutting room wall. They clarify how and why specific steps in the process happen —including the gorier first steps.

The precision, scale, and speed of the process are nothing short of amazing to those who work with cuts of meat every day. 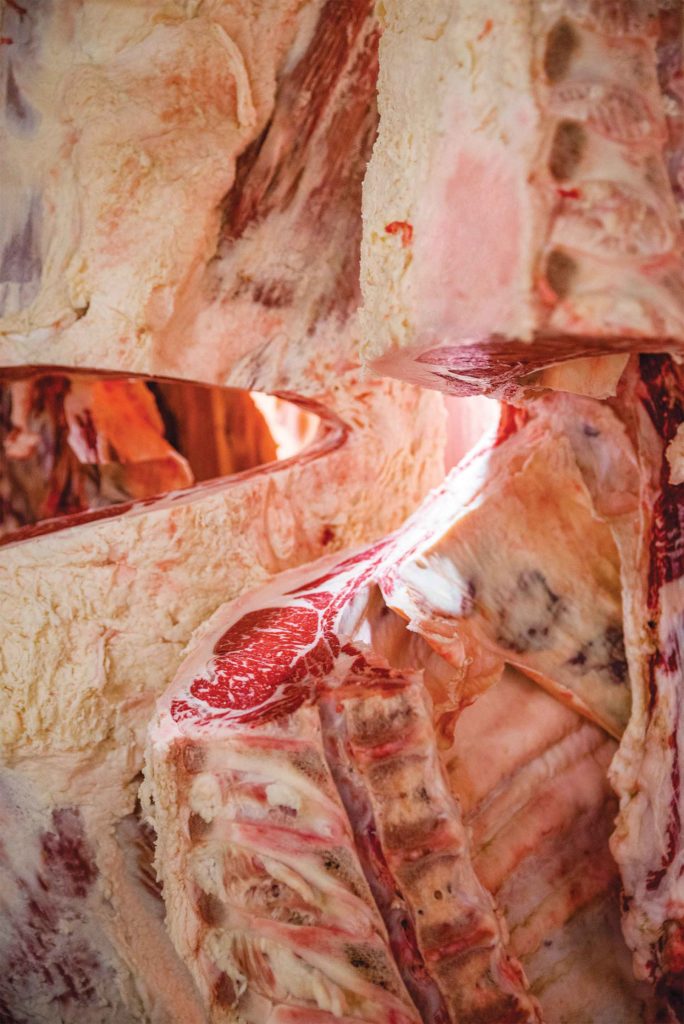 Each carcass is visually graded.

Next, they travel to the cow-calf ranch near Loomis, Washington (aptly named Double R Ranch). The manager’s house, guesthouses, and barn nestle in a valley — or coulee as the locals call it — well off the beaten path.

Ranch manager Kent Clark says his neighbors know he raises cattle for Agri Beef, but they have no idea where the meat ends up or where the people come from to see the cattle.

“They will go and eat at a restaurant in Spokane or Seattle and come back excited to tell me they had Double R beef,” he explains. “They don’t know you can go to Taipei and have Double R beef there, too. They have no idea it’s all over the world.”

Clark opens his tour in the barn where they store the semen and animal health supplies. A significant amount of time is spent discussing breeding decisions and how each animal’s health is managed. They track all of the herd genetics, from birth weight to meat quality.

“I tell them about our vaccination protocol and why we have antibiotics on hand just in case,” Clark says. “And I walk them through the breeding process, down to how we select our genetics and sync the cows.”

Taking time to tell the whole story is essential to the people at Agri Beef. They are very confident in their ability to raise the best cattle and produce the best beef that they can. And they want partners to have the utmost trust and understanding in the process and associated costs.

Next, Clark heads to the pastures, which are not all vast, open prairies like some meat managers and chefs probably expect.

Instead, he bounces them in a farm truck up an old logging road to the rugged mountainside permit ground. During the drive, he tells them about natural predators he has to manage and how the weather impacts his herd.

“I love giving these tours,” Clark says. “There’s usually so much disconnect between the cow-calf guys and the people selling the beef. I enjoy being able to hear what issues they run into in their world, just as much as helping them tell their customers where the food comes from.”

However, there is one downside to inviting Agri Beef’s customers to his home.
“The worst part is we have these world-class chefs come here, and then we cook for them,” he jokes.

The guesthouse features a commercial-grade kitchen, where he, his family, and the accompanying salesmen serve some of their best cuts during supper, continuing to answer more questions.

The second day of the tour starts near Caldwell, Idaho, at the bull yard (officially called the Bull Development Center) to see the company’s genetic stock. Visitors learn details about how specific genetics are tracked through each generation, especially as it relates to final meat quality.

“We keep track of where we send the bulls and pull the data off their calves when they get to the feedlot and plant,” explains Natalie Bentz, who manages the bull yard.
“We use this data to determine how the bulls should be used next season or if they are done.”

This step seems expected to the outsider, but Bentz explains that data is not as easily transferred back down the line in traditionally segmented cattle operations. Our detailed integration from genetics to plate helps us track data very efficiently, she adds.

The tour concludes at one of the company’s feedlots near Parma, Idaho, so the customers can see how the cattle get just the right amount of marbling.

Selling the sizzle. “The biggest marketing tool we have as a company is first-hand knowledge of how the meat is raised,” says Aaron Sorenson, Lunds & Byerlys senior communications manager. 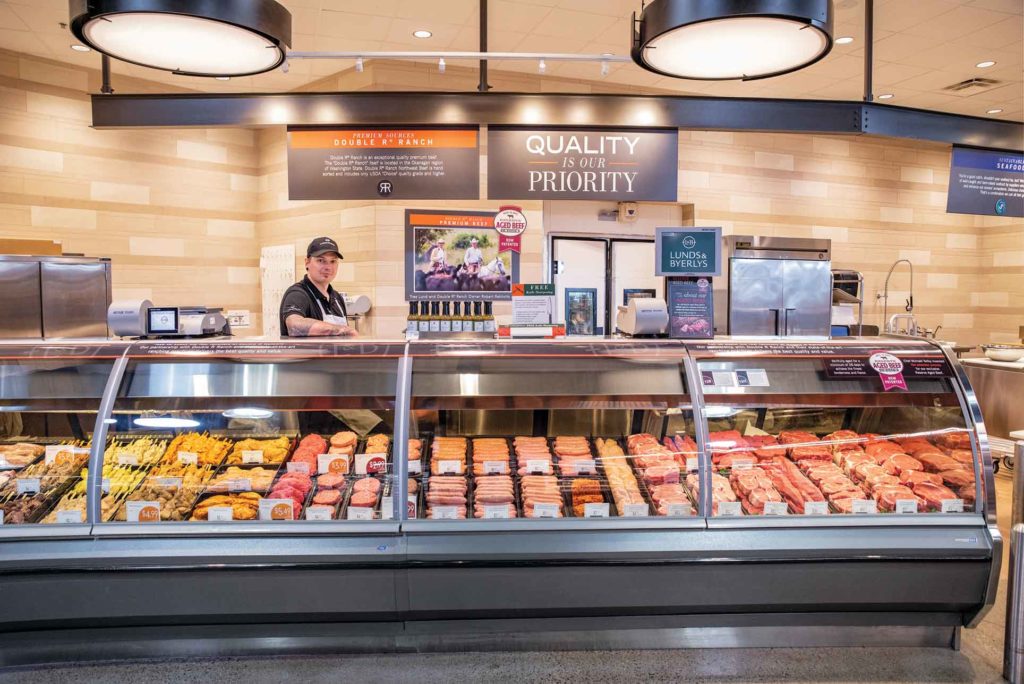 Every Lunds & Byerlys meat manager travels to the Pacific Northwest to see the whole operation.

A photo of Tres Lund and Robert Rebholtz, Jr. hangs above each meat counter, prompting curious customers to ask about the beef. For many staffers —including Nick Goodwin from the Edina, Minnesota, store — the trip to Agri Beef’s facilities was unlike any other, so they are quick to share their experience and confidence in the product.

A valuable lesson in the importance of transparency and brand advocacy.