For Charlie Johnson, the best reward is hearing the joy of young kids across bushels of apples at his orchard, “Hey Mom,” they say. “This is where the apple I had at lunch came from.”

Johnson’s Whistling Well Farm has produced apples on the St. Croix River bluff in eastern Minnesota for about 30 years. Their story begins with lost cars.

“Back then, we were raising some cattle. People would come down our lane by mistake, looking for our neighbor’s orchard. They’d ask us what we sold because they were here to buy,” he remembers. “So we started growing pumpkins and eventually apples. We just got a little carried away.”

Charlie, his late wife, and their two sons grew their orchard into a prosperous business. Currently they grow 14 apple varieties across 40 acres, with more ground for future expansion.

The business relies on local teenagers and retirees for summer and fall labor. Chores range from mowing between trees and managing pests to picking, washing and sorting apples.

During harvest, their modest farm store is open daily. On the weekends, live music and food is offered, and families can pick their own apples.

Core customers. Half of Whistling Well Farm’s apple crop is sold directly to consumers at numerous farmers markets and their farm store. The other half is sent to area grocery stores and school districts.

“We’re diversified enough to know all of our apples will be sold,” says Johnson. “When we do have excess apples, we donate them to a food shelf.”

Johnson’s eyes light up when he talks about the school district customers, because part of his apple growing career overlapped with his career as a school librarian. 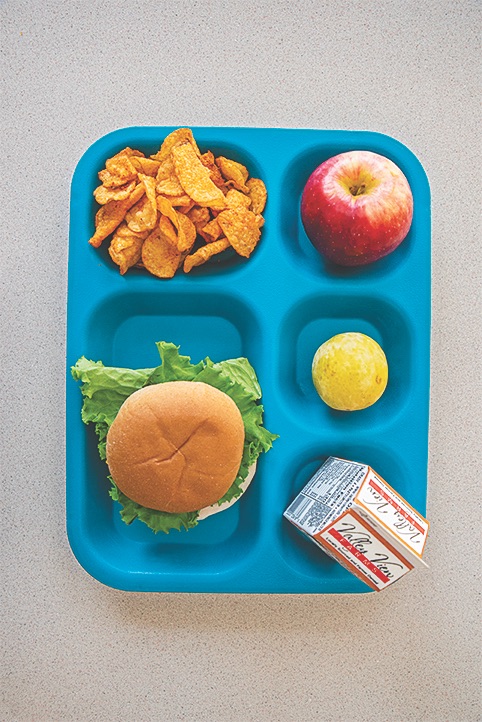 “For maybe 15 years, we have delivered apples the first day of school through December. We give the schools University of Minnesota varieties like SweetTango and Honeycrisp.” He adds, “It’s always a crisp apple; kids do not like soft apples.”

Johnson loves providing the school children with a good apple, but it also helps round out his business plan.

The school districts take a smaller apple than grocery stores, so it is a good outlet for apples otherwise sold as a lesser grade.

One of those school districts is in Hastings, Minn., a 15-minute drive downriver from the orchard.

“We go through about 2,500 pounds of apples a week between the five schools in town,” says Michael Manning, director of food services at Hastings Public Schools. The district has 4,500 students.

Manning finds a lot of advantages in buying local, fresh apples. The biggest benefit is the kids like them.

“We’ve noticed that when we serve a higher quality, better tasting apple, the kids are more likely to eat it, as opposed to just putting it on their tray to eventually throw away,” says Manning.

The district also takes advantage of funding from the government’s Farm to School program and Fresh Fruit and Vegetable Program.

“Buying apples that taste good from Charlie is just as competitive as buying regular apples from who knows where,” Manning says. “And it’s cool that when I buy from Charlie one day, he or his son is the one delivering them the next day.”

Farm to school. According to the most recent USDA Farm to School census data from 2015, 42% of districts surveyed across the country participate in the program. Minnesota was just above average with 51% of districts participating. Rhode Island ranked highest with 90%, and Oklahoma was the lowest with 21%.

Minnesota plans to expand local foods, thanks to a June 2019 bill that established a pilot grant program for schools and child care centers to access more local foods. A grant of $400,000 will help districts purchase local foods. This program also provides technical assistance to the food service staff and farmers involved in the Farm to School program.