Treasure is usually well hidden, but not in the case of field pennycress. It has been hiding in plain sight all these years as a winter annual weed on Corn Belt farms. With the help of advanced breeding technology, improved varieties of this plant can be the source of a golden oil, as the plant’s tiny seeds taking on a near-golden hue.

Winthrop Phippen, a Western Illinois University plant breeder who has worked with pennycress since 2009, says this plant fits a unique niche that he calls a cash cover crop. “It functions as a cover crop by protecting soil and scavenging nutrients. It fits between corn and soybeans in a typical rotation, harvested to make oil for food or fuel, and a high-protein meal for animal feed.” 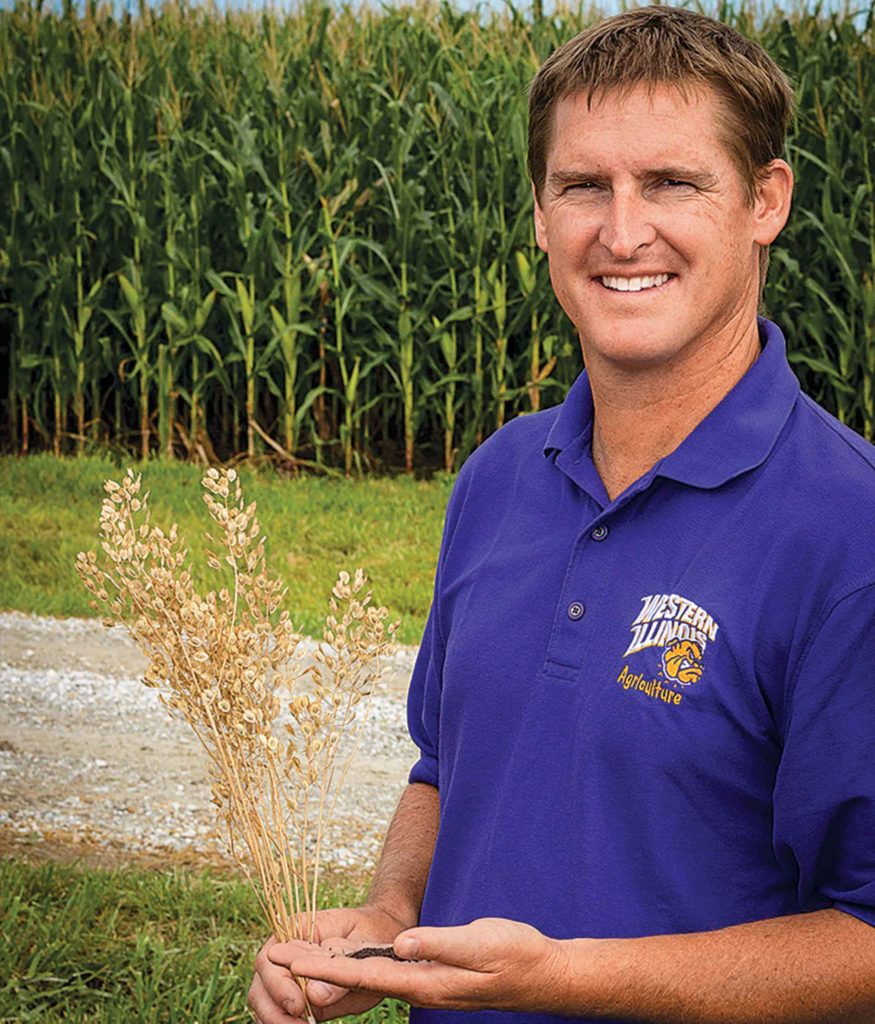 Winthrop Phippen and a number of collaborators are working toward a goal of commercial production by the 2021 growing season.

Penny wise. USDA also sees potential in pennycress, as it is providing a $10 million National Institute of Food and Agriculture grant to speed commercialization of the crop. Researchers from Ohio State University, University of Wisconsin-Platteville, University of Minnesota, and Illinois State University will join Western Illinois to refine the value of this new oilseed crop.

“Pennycress is unique among cover crops because it has the potential to generate income,” Phippen adds. “We project it could be a source of 2 billion gallons a year of oil, yet it does not take any acres away from food production. It simply gives farmers a chance to grow three crops in two years.”

The project is coordinated through IPREFER—Integrated Pennycress Research Enabling Farm and Energy Resilience, online at iprefercap.org. Research will focus on improving pennycress genetics, agronomic management, ecosystem evaluation, and supply chain management for post-harvest seed control. IPREFER’s goal is to have a commercial launch by the 2021 growing season.

Designer genes. The commercial partner charged with carrying the crop to commercialization is CoverCress, Inc., based in St. Louis. Native pennycress grain has high levels of erucic acid, fiber, and an anti-nutrient called sinigrin. Those compounds limit the use of oil and meal from wild pennycress lines. Using advanced genetic techniques, those limitations have been overcome. The company calls the improved version CoverCress, to differentiate it from unimproved pennycress.

Field pennycress, Thlaspi arvense, is a member of the mustard family, but it shares many genes with Arabidopsis, a plant species with a well-documented genome. Using techniques such as the gene-editing protocol called CRISPR, researchers were able to cut the genes responsible for erucic acid production, resulting in an edible seed oil with characteristics similar to canola.

Scientists also showed that they could transform pennycress with a gene called EaDAcT. This allows the plant to produce a seed oil with characteristics that make it well suited for use as a renewable bio-based fuel. “There also are similarities to the canola genome,” says Jerry Steiner, chief executive of CoverCress (covercress.com). “The knowledge of these genomes allows us to use molecular tools to quickly alter the characteristics of the plant to whatever needs the grower or end-user might have.”

One end-user waiting on the horizon is the aviation industry. Early on, industry testing of pennycress oil showed it to be a viable candidate to be used as fuel to power jet engines. “Demand is building,” says Steve Csonka, executive director of the Commercial Aviation Alternative Fuels Initiative. “This crop could become a significant feedstock to supply sustainable aviation fuel.”