The aroma from the commercial kitchen at the Canadian Beef Center of Excellence (CBCE) is heavenly. Some days at the Calgary, Alberta facility, your nose will sense beef ribs slowly roasting in one oven; then mini-quiche stuffed with beef wafting from another, along with a batch of beef chips hot out of a third oven.

Beef is still the king of meats, but its crown fits a little looser these days. Chicken and pork are positioning to steal the throne while lamb and seafood are waiting in the wings. Meat counters have become a carnivore’s cornucopia. Big supermarkets offer consumers a range of choices that earlier generations couldn’t imagine. Can beef retain its top position in the face of all this competition?

“Beef has a lot going for it,” says Mathieu Paré, executive director of the CBCE. “It’s really exciting to explore as a cook because there are few ingredients that can deliver so much juiciness, taste, and aroma with such a small amount of cooking preparation. It also brings an element of celebration to the table because it’s a cherished part of many people’s heritage. People often choose it to celebrate a special event. For example, think about how often families come together to celebrate Father’s Day by cooking steaks outdoors on the barbecue.” 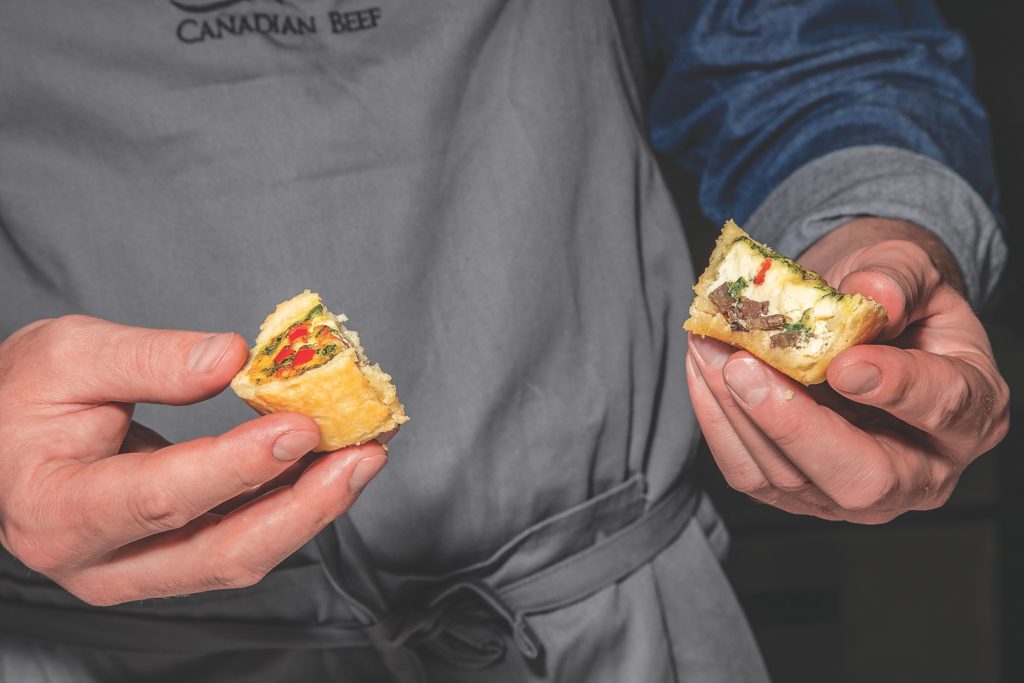 Adding bit of beef can give foods a new dash of flavor.

Passion for beef. Paré has a personal bias towards beef; he developed a passion as a young boy cooking it over an open flame and never got over it. He still loves all cuts of steak, but has a slight preference for a thick cut, medium rare strip loin. However, when pressed, he’ll admit that his favorite part of the carcass is the chuck, due to the versatility those muscles have to offer.

The CBCE was established in 2015 by Canada Beef, an independent organization that markets Canadian beef to national and international customers. They use a state-of-the-art culinary demonstration theater to educate butchers and chefs from across Canada and around the world about new ways to work with the beef carcass.

“Carcass cuts are now bigger than they once were,” Paré says. “So, it’s important to show chefs and butchers that there are new creative approaches to working with these muscles. We highlight new cutting techniques and innovations to show what value different cuts can bring to a meal and their business operations.”

Broadening our palates. Canadian beef is sold around the world. Chefs and buyers from many different countries travel to the CBCE to learn details about Canada’s grain-finished beef.

Not every culture prefers the same types of cuts. Asian cultures, for example, appreciate organ meat far more than Canadians and Americans. They use the center’s expertise to determine how to achieve the highest value from these under-appreciated cuts.

At the same time, Canadian chefs learn from their Asian counterparts while they’re visiting the center. Such expertise trading helps to broaden the national palate of both countries, and it builds an appreciation for these cuts in domestic markets, too. 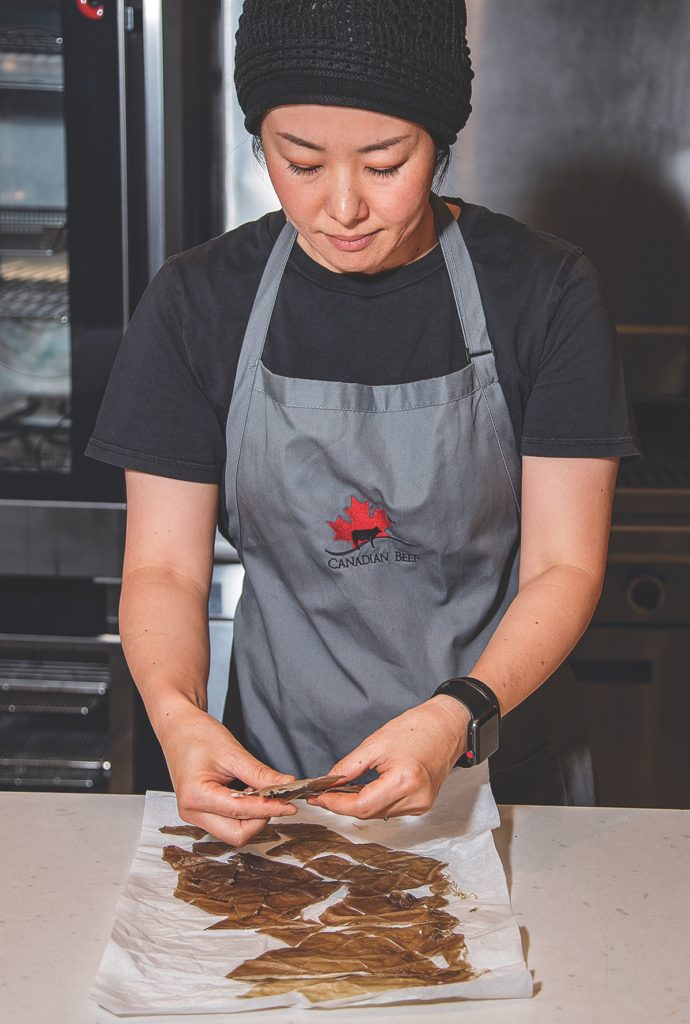 CBCE sous chef Yoshiko Taylor works with a tray of beef chips. It’s an innovative product the center is working on that’s made from lean beef, water, and tapioca flour. It’s steamed, dehydrated, and deep-fried to create a crispy gluten-free beef chips.

“Thin cuts that can be marinated, grilled in or used in hotpot-type soups are very popular with Asian families, so portion sizes are much smaller than we use in North America,” Paré says. “They have an amazing ability to stretch out their protein dollar. At the same time, they put a lot more value in the mouthfeel experience and the beauty of fat in more highly marbled meat, so they have extra appreciation for our grain- finished beef.”

Consumers have more choice than ever, but beef remains in a class by itself, Paré concludes. There are so many ways to explore what we call the terroir of beef;
its textures, tastes, and flavor profiles through different cooking techniques. Beef is unmatched in the protein category.