Reclaiming what was once lost.

Reclaiming what was once lost.

Fighting phosphorus loss isn’t just a farm field and urban landscape issue that degrades water quality. It’s also a mining issue. “If we keep taking it from geologic deposits and cycling it into the ocean, we can’t really get it back,” explains John Brockgreitens, graduate research assistant at the University of Minnesota and lead scientist at Claros Technologies.

He is talking about phosphorus depletion within the time frame of a few generations.

The problem. Most options available to capture run-off phosphorus make an insoluble compound by binding aluminum to it, which reduces associated water quality issues.

“This is more like a band-aid solution,” Brockgreitens says. “The compound settles to the bottom of the lake rather than removes the phosphorus.”

He and his team in the Biosensors and Bionanotechnology Laboratory at the University of Minnesota seek methods to not only contain the polluting of lakes across the state with phosphorous, but also to reclaim it for reuse as crop fertilizer again.

“We have all these people thinking from different perspectives. And that’s how you get to something disruptive that can solve the problem,” Abbas says. “Our mission is to solve problems without creating new ones.”

Testing the hypothesis. They started with mercury.

“Two-thirds of lakes in Minnesota are contaminated with mer cury, and that is the reason you should only eat fish twice a week,” says Abbas.

In 2017 they developed a “super sponge” made out of a regular sponge you would use to clean your house and a chemical sorbent that binds explicitly with mercury. In a matter of seconds, the sponge safely soaks up the mercury from contaminated water and renders it nontoxic.

“You don’t need mercury back,” says Abbas. “For phosphorus, we wanted to do it in a way that you can recover the resource and reuse it as fertilizer.” 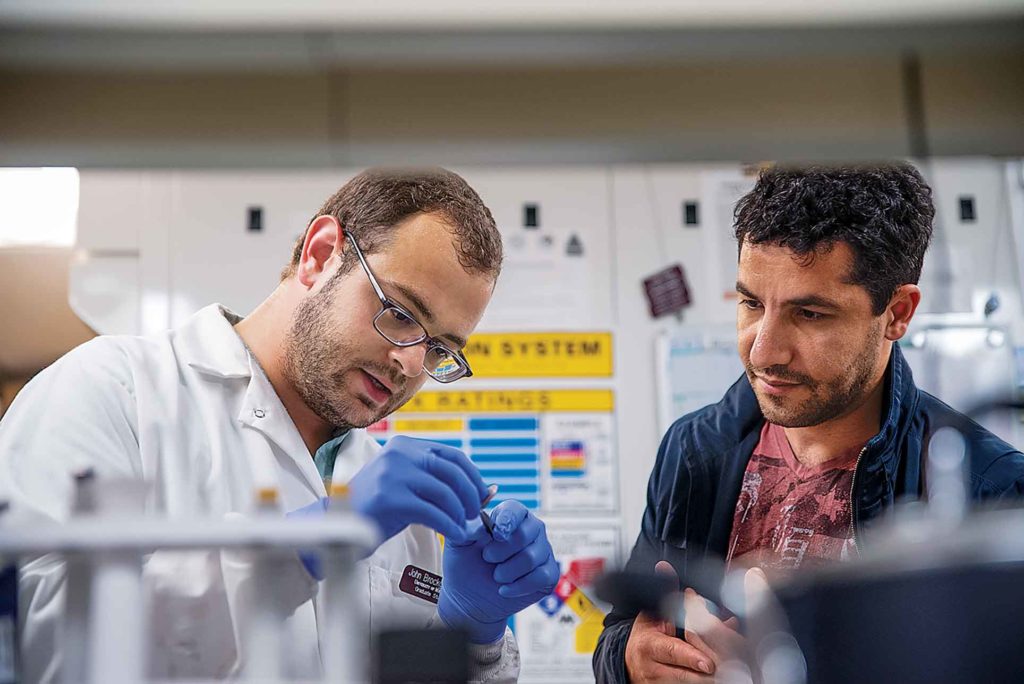 A 3-foot by 6-inch bag filled with about a kilogram of phosphorus-absorbing material was deployed in a Minnesota lake in 2019. It can absorb 300 grams of phosphorus in a matter of days. John Brockgreitens and Abdennour Abbas use a dye test in the lab to determine what was captured.

Following the same methods as they did for mercury, the team developed a granular material with a phosphorus-absorbing capacity 30 times greater than other options on the market, which are more like household water filters.

The success of their mercury project and the potential for the phosphorus version led Abbas and the University to spin off the work and form a new company: Claros Technologies.

“We received funding from the EPA and the Department of Defense to take these technologies to the market,” explains Abbas.

“It does not work to reuse phosphorous if you can’t capture a lot of it, so we want to get this material everywhere,” Brockgreitens says passionately.

Scaling up. The group will focus on capturing phosphorus from storm water first, working with municipalities.

Eventually, they would like to see units also installed at tile drains to catch run-off before it even reaches lakes and rivers.

But the game-changer is going to be their ability to get it back out of the absorbent material.

“The idea of reuse is such an important facet of what we’re trying to do,” says Brockgreitens. “We don’t know if we have 200 years worth of phosphorus left or not, but it’s important to close the loop now and stop sending it one way down the stream as we try to feed more people on the planet and grow more crops.”

The team will be looking for farmers to help in the development of the reuse program.