“Oh give me a home, where the buffalo roam…” you know the rest, and I apologize for it now being stuck in your head. Growing up on the vast, empty plains of southeastern Montana, I was sure the author was soaking in the same sagebrush-covered landscape when he penned those words. It turns out it was a Kansas homesteader, Dr. Brewster Higby.

He may not have written about Montana, but his 1872 song and sentiment were undoubtedly in the hearts of those homesteaders who tried to carve out a living on an unforgiving scrap of northern prairie. Those brave, often desperate souls paved the way for today’s ranchers like 5-generation-deep, Powderville, Mont., neighbors Tom and Lillian Ostendorf (my parents), and Clarence and Ingrid Brown.

Each modern ranch is a patchwork of dozens of failed homesteads. The evidence of their existence, though, is slowly melting away as blizzards tear at boards, hail pounds at stucco, and stone walls crumble back to the earth from which they were harvested. 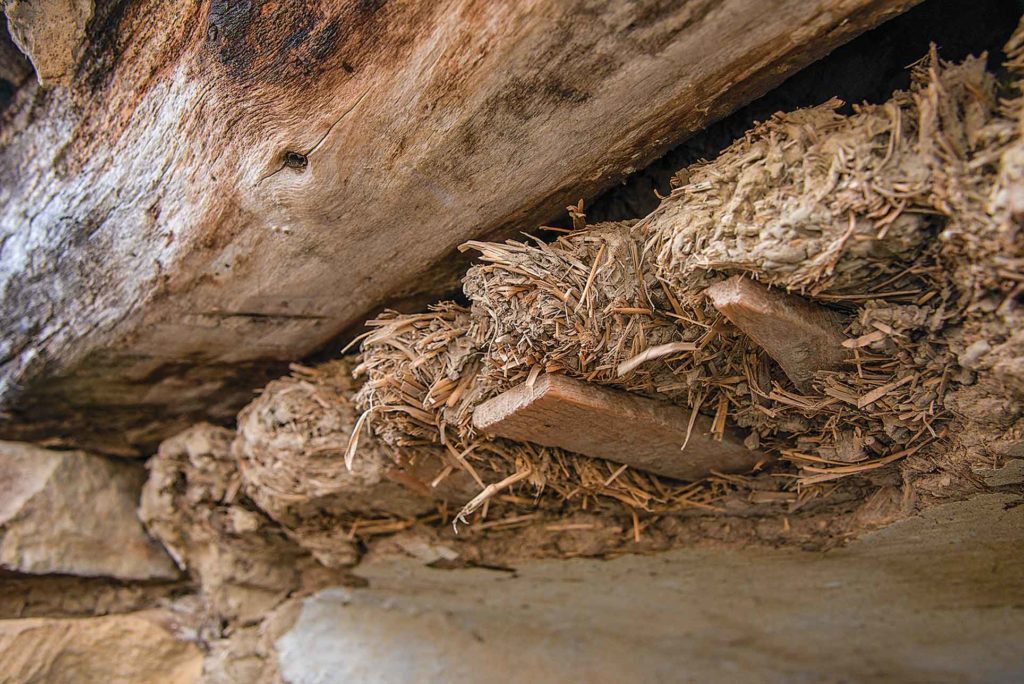 Building styles reflected the culture of homesteaders. This straw mix is locally known as Russian mud, as it is always found insulating homes built by Russian immigrants.

With just over 100 years passing since many area claims were filed, the oral history of homestead life is still holding on. Various home sites point out to the next generation, and stories are told as fences are fixed and cows checked. A few “old-timers” even serve as living links, their early lives intersecting that of aging homesteaders. Those links will ultimately break, though, leaving stories to weather like the homes in which they were created.

Many generations-deep ranchers feel a calling to maintain the history of both their ancestors and the families who had to give up on their dreams.

“It took a special kind of people to love the land and the idea of owning a piece of ground. They came way out here to find a new home,” Lillian says. “Every little homestead tells a tale, and they’re worth preserving.”

Tall tales. Montana was late to the homestead rush. The state’s land grab peaked in 1918. Soils were poor, winters were long, and water was hard to find. John Wesley Powell, first director of the U.S. Geological Survey, found the land so marginal he recommended it not be homesteaded.

The 100th Meridian slashes a line through the heart of the eastern Plains states (the Dakotas south through Texas). Powell declared it a barrier. Beyond, less than 20 inches of moisture falls, often less. He deemed the land unfarmable without irrigation.

If any success could be gained, he said, it would require groups of people working together. A measly 160 acres per family would surely fail. Powell was ignored, and failure abounded.

Many lies were told to get settlers to Montana: there was more rain than rumored, the winters weren’t all that cold, and the land was prime for farming. Those living in the region today can attest the winters are both long and cold. It doesn’t rain, and farming only works thanks to the advances in dryland farming techniques.

This wasn’t news when the second round of homesteaders hit following the end of World War I. Large cattle and sheep ranches were already established, grazing the open range. There were a railroad and emerging settlements such as Miles City, which had recorded unimaginable cold.

In January of 1888, a thermometer hit -65 degrees at nearby Fort Keogh. The horrific winter just prior was immortalized by C.M. Russell’s famous painting, wryly titled Waiting For A Chinook, of a lone starving cow, the only survivor of a 5,000-head herd.

Hopefully or willfully oblivious, eager homesteaders stepped off trains into the lush green grass of spring to start their adventures.

They scattered to the prairie to find the perfect spot, paid their $3 filing fee, and built houses with what they could find.

At 151,600 successful claims— about half of those filed in the state — Montana had more homesteads than any other state. More than 32 million acres were claimed.

As of 2018, only 26,900 farms and ranches remain in Montana, and the number continues to fall. Clarence Brown’s family is counted among the survivors.

His grandfather, Joe Brown, came to the area in 1897 to work for the WL ranch before claiming his piece of prairie.

Clarence, who passed most ranch duties along the Powder River to the 4th and 5th generation, has taken up locating and metal detecting at the old homesteads on his ranch. 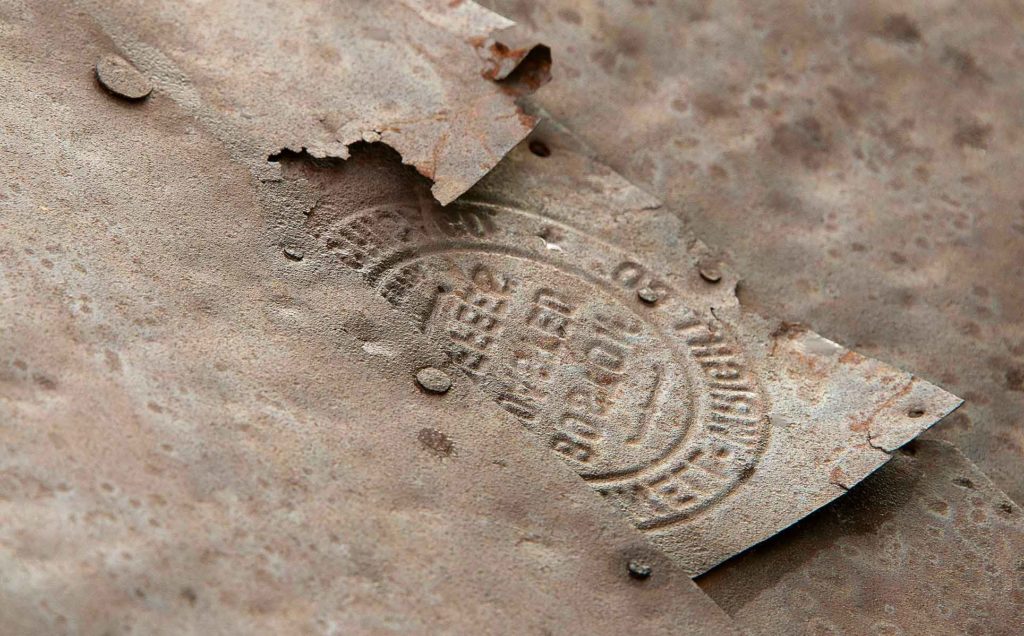 “Everybody says people buried tin cans with money—but nobody had money, so I’m just digging up tin cans,” the Powderville cattleman jokes.

Always stoves. His finds go beyond the common old cans and shell casings to include cavalry shells, a silver child’s ring, suspender clasps, a corset busk, stirrups, ornate buckles, square nails, silverware, mystery items, and stoves. “You’ll find a stove at every homestead,” he says, no matter how little of the structure is left. The Brown ranch has grown from a stove and a couple hundred acres in 1910 to a 37-section spread the family uses to raise cattle. The land is littered with homes, evidence of a once-thriving community.

There are rock houses, log houses, rough-cut timber houses, humble homes dug into hillsides, and two-story frame homes built in the open, taking the brunt of the prairie weather. Farm equipment, old cars, and assorted household items surround them, slowly being absorbed by the sod.

Prairie keepers. While some home sites are obvious, Brown explains for every one still standing, there are many more that have been nearly erased, mostly by prairie fires. Some were cannibalized to build later structures. In both cases, only a bit of a hole remains. Brown hopes to one day put up placards at each of these sites.

“I’m the oldest guy left in the community,” the 75-year-old says. He has many first-hand memories of the people who lived in the homes on his property. “Somebody might not even know there was a homestead there. You’re at risk of losing your history.”

There are some hints. Most pasture names reflect who homesteaded the land. The Mentikov Place, the Carter Place, the Ehly place, the list goes on and on.  But the best links are the stories.

A faded photo in Brown’s dining room depicts a wagon hitched to a team comprised of a horse and cow. The horse looks disdainfully at its partner.

“This guy homesteaded just up the river. One of his team horses died. He wanted to get to the school to vote, so he hooked up the milk cow,” Brown explains. 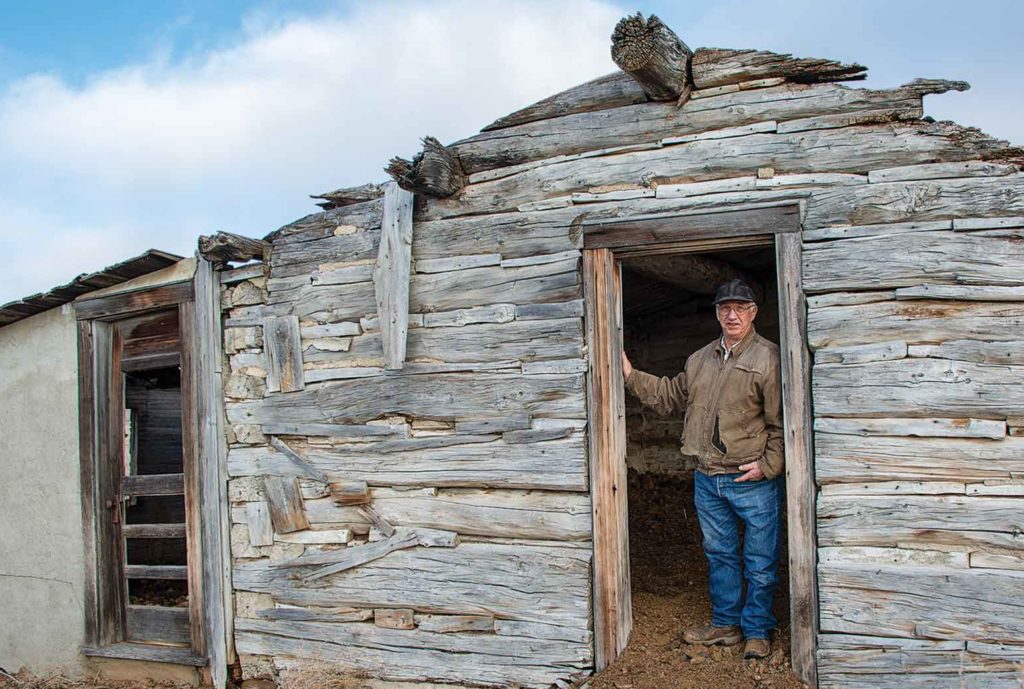 Clarence Brown stands in the doorway of a school built by his grandfather, at which he was one of its last students.

On the way to visit a one-room country school built by Brown’s grandfather and attended by Brown through second grade, we pass a few log walls. They bravely stand despite the force of a large cottonwood tree branch having crashed across the small room they form. Brown recalls the fellow who lived there played fiddle. If they caught him on the right day, he would play Brown and his siblings a tune as they walked past going to and from school.

The school was in better repair, but still tricky to imagine in use. The teacherage was a tiny lean-to room, and water had to be fetched from over the creek bank. Brown recalls the school teacher “carried on” with a local rancher. Many school teachers found themselves brides to homesteaders.

On a windswept flat, a rock house stands in resounding defiance of the bitter winter wind. There, Brown says, lived a bachelor who died of social disease, thanks to frequent visits to the brothel in Miles City.

Dug into a creek bank was a rock house where Ed and Helen Orestad, Lillian’s parents, lived as a young family. They worked for Brown’s great uncle and father. Pictured on the last page with sun peeking through the rafters, grandma recalls those same rafters hosting an unwelcome guest. “I heard a noise in the attic, so I poked up there with my broomstick. A rattlesnake coiled and started striking at me. I ran to Albert’s house (Brown’s father), but the snake had gone by the time we got back,” she recalls. Such were the hazards of living in houses dug into creek banks. 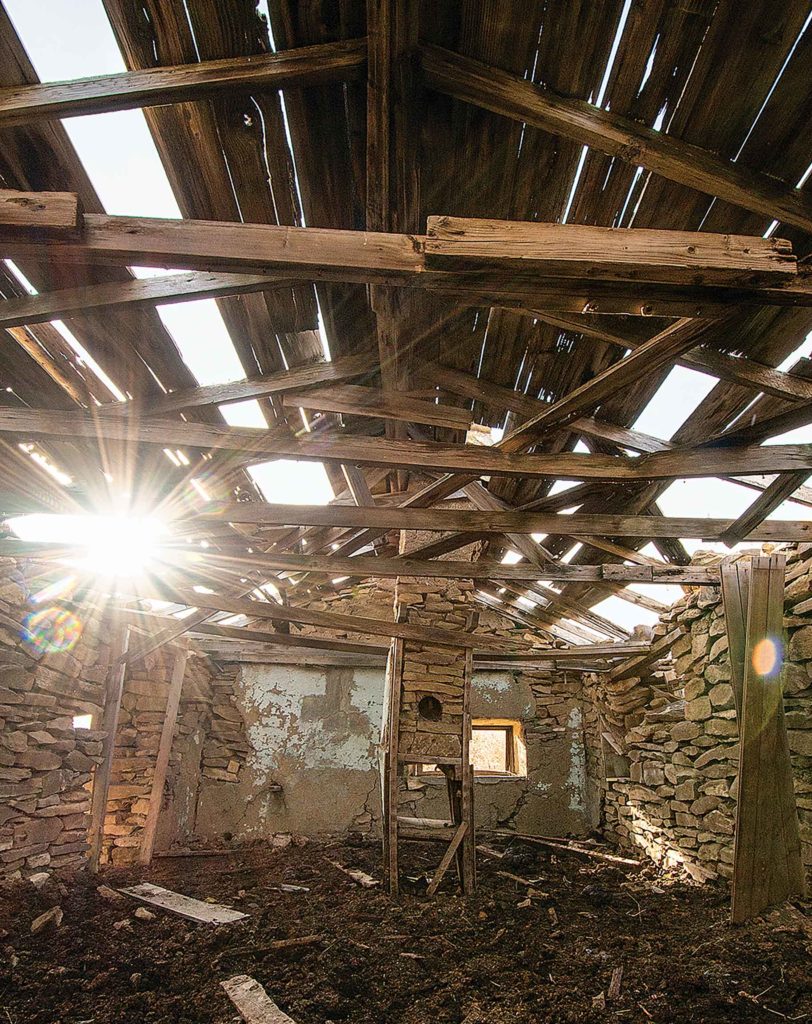 Sun shines through rafters where a rattlesnake once took up occupancy much to the terror of Helen Orestad, an Iowa girl who married a homesteader’s son.

Even when stories aren’t known, imagination takes flight when an old homestead is visited. “After we’ve moved cattle or checked water, we often stop in at the homesteads. We like to poke around, find old relics and tell stories to the kids and grandkids about how it felt to ride a dump rake, for example, while they play on the old equipment,” Lillian says. She lived in a home with no electricity or running water until age six. Her father, Ed Orestad, was delivered by his sister one cold November day at the family homestead. “It’s fun to imagine what life was like, and scary to think of the hardships.”

Rocks were readily available materials, but not the warmest. Brown recalls frost forming on interior walls despite blazing fires.

Pulling threads. The families that left homesteads may be gone, but they haven’t been forgotten.

Jody Smith lives in Miles City, but her grandmother was a child on a homestead now counted among those on Brown’s ranch. “There were six Madsen children in a house with just two rooms, one of them a dugout,” Smith says. Her grandmother was born in 1905 and passed in 2005. She made several trips back to the homestead with Brown’s blessing, bringing her children, grandchildren, and great-grandchildren to the spot that brought their family to the area.

“She never spoke of the hardships, but recalled getting an apple once for Christmas. She set it on a shelf to admire it for days. When she finally went to eat it, the back of the apple was eaten,” Smith says. The devastation of the loss of such a simple gift speaks volumes of what life was like back then.

The Ostendorfs have had relatives from Norway show up to see where the families that left ended up.

“There’s an innate curiosity from both those who left and those who had people leave to start new lives. There’s a connection in your soul to that little piece of land that started the whole thing,” Lillian says. It’s a connection they hope to keep.

Dan and Laura Boyce visit a homestead on their Winifred, Mont., ranch.

Visit the Land Patents section of glorecords.blm.gov to discover who homesteaded the land you call home.