The Tall & Short of Modern Corn

The Tall & Short of Modern Corn

Thanks to Percy Faith’s 1950 release of a 78 rpm record featuring the Iowa Corn Song, millions of Americans learned that “I-OWay” is where the tall corn grows. Recent developments in corn breeding, however, may convince growers in Iowa — and all across the Corn Belt — to trade “tall corn” bragging rights for practical agronomic and economic benefits offered by hybrids with less height.

In the U.S., Bayer Crop Science introduced “short-stature” corn in demonstration plots during the 2019 growing season. These hybrids reach a maximum height of around 7 feet, a full yardstick shorter than conventional hybrids that stretch up to 10 feet and beyond. Short corn is a part of the company’s search for improved standability; breeders believe that the change in plant structure can bring about reduced in-season losses from root lodging, green snap, and stalk lodging.

“The first thing on a grower’s mind is yield,” says Calvin Treat, a corn breeder and technology lead for corn at Bayer. “But the second question about a corn hybrid is standability. If a hybrid produces a high yield but lays down before it can be harvested, the corn grower has got a problem.”

In addressing that problem, Bayer scientists reflected back to Norman Borlaug and the Green Revolution that got underway in the 1960s. Borlaug saw short-statured semi-dwarf, disease-resistant wheat varieties as a way to help feed the world. “That started us on the path to developing short-stature corn,” Treat says. “We’re working two different ways to get those genetics in place. One is through conventional breeding; the other uses a biotech approach.”

Fairy tale plant. At the other end of the scale, Jason Karl wrote the book on tall corn. That’s a literal fact — his Tallest Corn book details how corn has evolved from its Parviglumis teosinte ancestor tracing back to 6,000 B.C. “You can look at corn as a fairy tale plant,” Karl says. “Depending on how humans have used the genes, corn can be extremely short, or so tall that it is like a Jack-and-the-Beanstalk plant.” 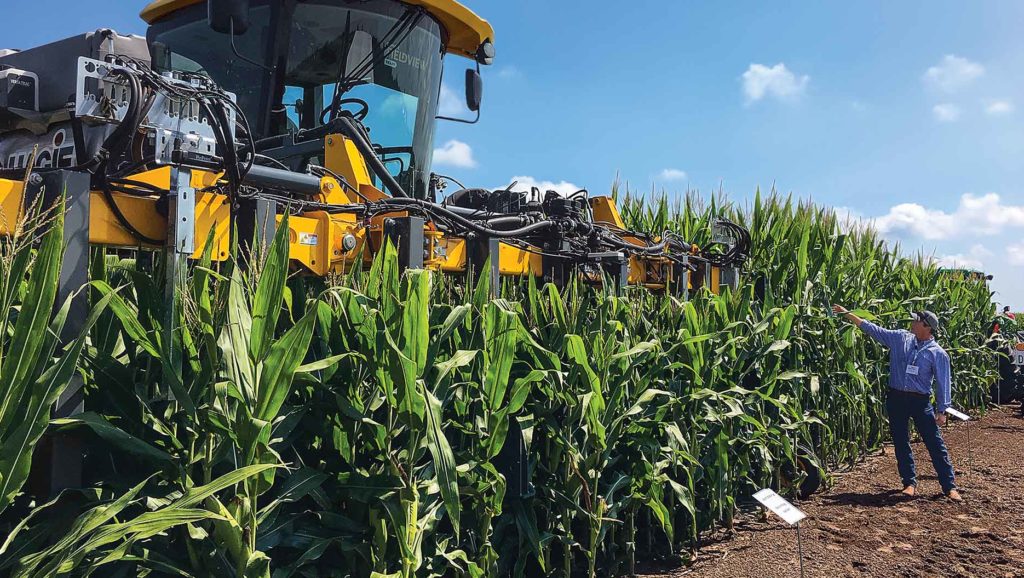 High-clearance equipment can clear short-stature corn (foreground) later in the growing season as compared to taller conventional hybrids. That opens up opportunities for precision application of nutrients and pesticides.

Karl is an expert at the giant plants. His 35-foot-tall stalk, grown on his family farm in New York, was certified as a Guinness World Record. Since then, he has used the longer growing season in Costa Rica to score a 45-foot stalk and a 48.5-foot stalk.

While in college at Cornell University, Karl began a deep dive into corn height genetics, teaming his breeding efforts with environmental manipulations that boost corn height. His tall corn traces its genetics back to Chiapas 234, a tropical variety that increases the number of internodes when grown under a light regimen that provides long days and short nights. As an independent researcher, Karl’s efforts are intended only to learn more about the basic science behind how corn grows. He simplifies the science of corn height into a couple of critical factors: the number of internodes and the length between those internodes. Karl’s backcrossing of Chiapas with natural mutations such as Leafy — which adds extra leaves (and thus internodes) — allows him to produce plants with approximately 100 internodes. A conventional hybrid has only about two dozen. He manipulates both genetics and the environment to try to impact the length between those internodes.

New plateau. By shortening the length between internodes, Bayer researchers look to develop a hybrid that will allow access with high-clearance equipment much later in the growing season. That could open the way to more precise and efficient nutrient and pesticide applications. The shorter corn also should be less susceptible to lodging and high-wind damage. Researchers also are working to ensure short-stature corn hybrids can hold their own for yield — and set ears high enough above the ground (a goal of 24-inch ear height) for easy harvest. Short hybrids also could open future avenues for boosting corn yields, offering a potential fit with narrower rows and higher populations.

Bayer is offering the short-stature corn for sale to farmers in Mexico for the 2020 season; officials say it could be available early this decade in the U.S.