A foundational concept of agricultural extension work is that ‘farmers often doubt what they’re told and may even doubt what they see, but they seldom doubt what they do.’ That’s the logic behind a unique educational effort by research and extension personnel at the University of Nebraska. Their Testing Ag Performance Solutions (TAPS) program helps farmers adopt new technology and learn new practices by pitting their management decisions against one another. However, unlike any yield contest or farm management competition, TAPS puts its participants on common ground—literally right in the same field.

Last season —the program’s third—the management strategies of 99 participants on 24 ‘farm’ teams were compared on a 40-acre pivot-irrigated cornfield at the University’s West Central Research and Extension Center (WCREC) in North Platte, Neb. Each team was randomly assigned a set of three experiment-sized test plots totaling roughly 1/2-acre in size. Decisions on hybrid selection, seeding rate, nitrogen application, and irrigation management were made through the program’s website and conducted by the center’s personnel.

The yields and costs for each team were amplified to 3,000 acres to facilitate grain marketing and crop insurance decisions also factored into the program. Agribusiness sponsors and partners in the project provided access to the latest seed, irrigation, crop monitoring, and nutrient management technologies along with financial and marketing information. “TAPS is a unique approach to help farmers work with new technology and fine-tune their management skills, and the response has been fantastic,” says Daran Rudnick, irrigation management specialist at WCREC. “The results indicate that there are production and business management decisions  that certainly impact profitability. However, the key benefit is that TAPS serves to encourage participants to exchange ideas and discuss new management and marketing techniques.”

Rapid growth. TAPS was launched in 2017 with 13 participating teams. In 2018, participation grew to 20 teams in irrigated corn and eight teams in a newly added irrigated grain sorghum division.

The idea has caught on elsewhere as well. Last year, extension specialists at Oklahoma State University launched a TAPS contest for corn growers on a sprinkler irrigated field in the state’s panhandle area. This year, dryland wheat growers from Kansas, Colorado, and Nebraska will compete on a field near Sidney, Nebraska.

The TAPS recognizes winners in three categories; Most Profitable, Highest Input Use Efficiency, and Greatest Yield. “The profitability award is most coveted and includes a $2,000 cash prize,” says WCREC extension educator Chuck Burr. “The prize for the efficiency award is $1,000, and the yield award of $500 is reduced by the percentage the profit on that farm is below the profitability of the award-winning farm.”

The chart below shows the range of profitability on farms competing in last year’s sprinkler corn contest. 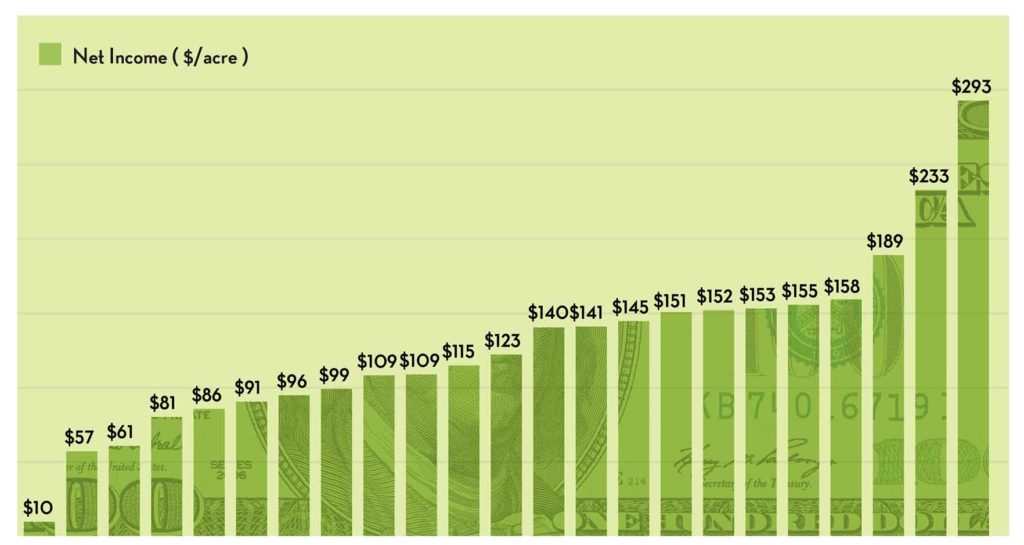 The profitability of teams in the 2019 TAPS program ranged from $57 to $293 per acre (the $10 farm was a control). Each team made production decisions over the internet for three test plots under the same irrigation system near North Platte, Neb. Marketing and risk management decisions were amplified to illustrate the impact for a 3,000-acre farm.

“A lot of the variation in profits occurs because of different marketing plans,” explains Rudnick. “Also, because participants have no real financial risk, they sometimes try management practices that they wouldn’t employ on their operations.”

“However, after three years, the results also highlight the role that a good marketing plan has on profitability,” adds the winner of the program’s 2017 profitability award.