A Handle on Soil Health

Researchers are nailing down the details.

A Handle on Soil Health

Researchers are nailing down the details.

A growing number of farmers are convinced that healthy soil is a valuable asset. Still, their testimonials and on-farm comparisons lack the science-based validation that researchers and government agencies crave. Those entities are scrambling to come up with the measurements and methods to access soil health—numbers that will allow farmers, scientists, policy makers, and others to answer the fundamental questions of just how healthy the soil is and how it has improved.

This effort to get a handle on soil health was on display at the most recent joint annual meeting of the societies of Agronomy, Crop Science and Soil Science. A ‘soil health’ query of presentations at that meeting netted 2,889 hits compared to just 348 at the conference three years earlier. Many of those presentations were spurred by funding from the Soil Health Institute (SHI), an independent, nonprofit organization that coordinates and supports soil stewardship and soil health advancement.

“The concept of soil health is good not only for farmers and ranchers but also for the environment. But the lack of a widely-applicable method of assessing soil health is a significant barrier to further adoption,” says Wayne Honeycutt, president of SHI.

In 2017, SHI released a list of 19 ‘Tier One’ soil health indicators judged to be widely accepted and 12 ‘Tier Two’ indicators needing additional research. Now, the institute is nearing the completion of a North American effort to determine which of those 31 indicators can best detect differences in soils managed under soil health principles.

More and more farmers are learning what healthy soil looks like, and now researchers are developing soil health indicators to document it.

“Last spring, a team of scientists took soil samples from 124 research sites where side-byside plots were managed, with and without the goal of improving soil health, for a minimum of ten years,” says Cristine Morgan, SHI’s chief science officer.

Morgan adds that the effort netted more than 2,000 soil samples. The 31 soil health indicators have been analyzed on about 80% of those samples. “When this effort is complete, we expect to recommend the most affordable, reliable ways to indicate soil health, as well as track changes due to soil health practices. This will help a farmer determine where soil health is now and where it can go.”

Flynn tested nearly 300 samples from the SHI project to see if a simple smartphone application, developed at the University of Sydney, Australia, could solve those problems. “The Slakes test is a free download app that farmers and consultants can run on a smart phone. Simply suspend it over a petri dish with soil aggregates immersed in water,” he explains. 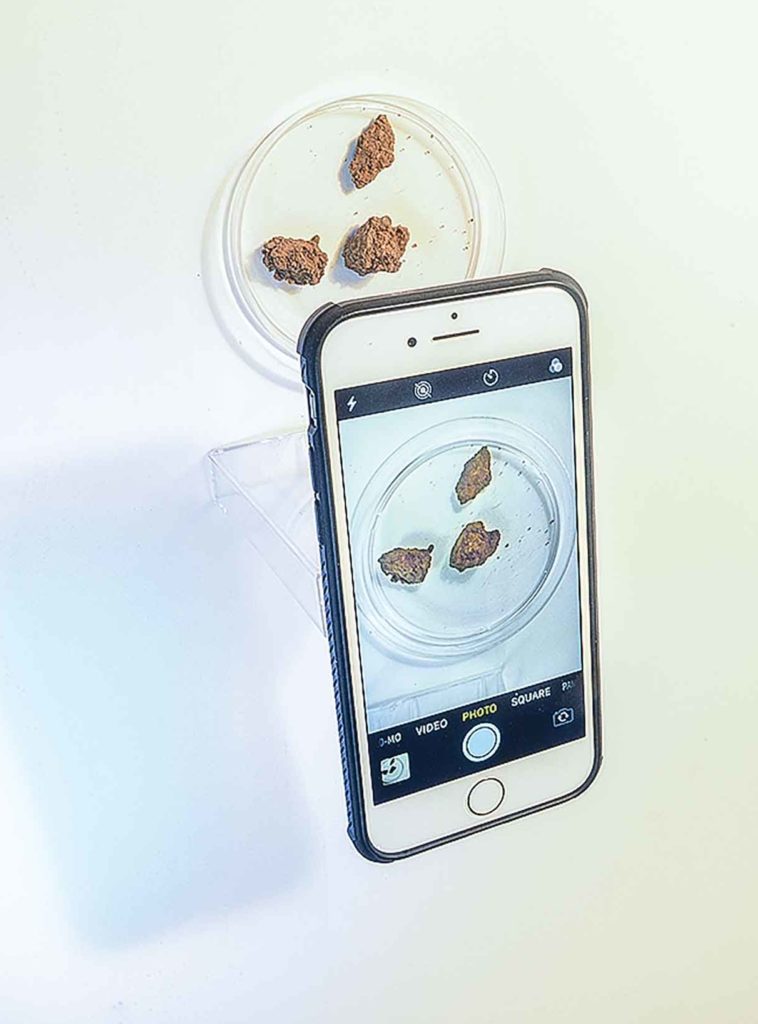 A new smartphone-based application may simplify some soil health testing.

The app contains a model that measures the change in the area of the soil aggregates over 10 minutes, then produces a numeric rating of aggregate stability. “Our results suggest that Slakes was able to differentiate among management practices across a range of soil textures. It makes rating and quantifying soil health more simple than traditional lab-based methods,” says Flynn.

The profitability of building healthy soil is also a part of the SHI project. “We’re pairing ‘soil health champion’ farmers with the 125 long-term research sites to analyze the economics of soil health practices,” says Morgan. “In one example, a corn/soybean farm’s net income was increased $60 and $23 per acre for those two crops, respectively. Ultimately, we’ll have partial budget information like this for 125 farms across the entire continent.”