Coming to the Crossroads

A big happy farming family may mean farming without the family.

Coming to the Crossroads

A big happy farming family may mean farming without the family.

It had a wonderful start, said a proud Fred Frey in a video about the family’s farm in Morganza, Louisiana.

He and his wife, Dot, were passionate about their four boys continuing to work the farm they built from scratch. Working together.

So strong was their conviction, they ceremoniously planted four live oak trees in front of the family home. They were a poignant symbol of a deeply rooted farm family.

Four Oaks Farm, as it came to be known, did have a great start. And a great run. But even the best of things run their course and must make way for the next.

It was no easy decision for brothers Mitch, Mark, Matt, and Marty to go their separate ways. 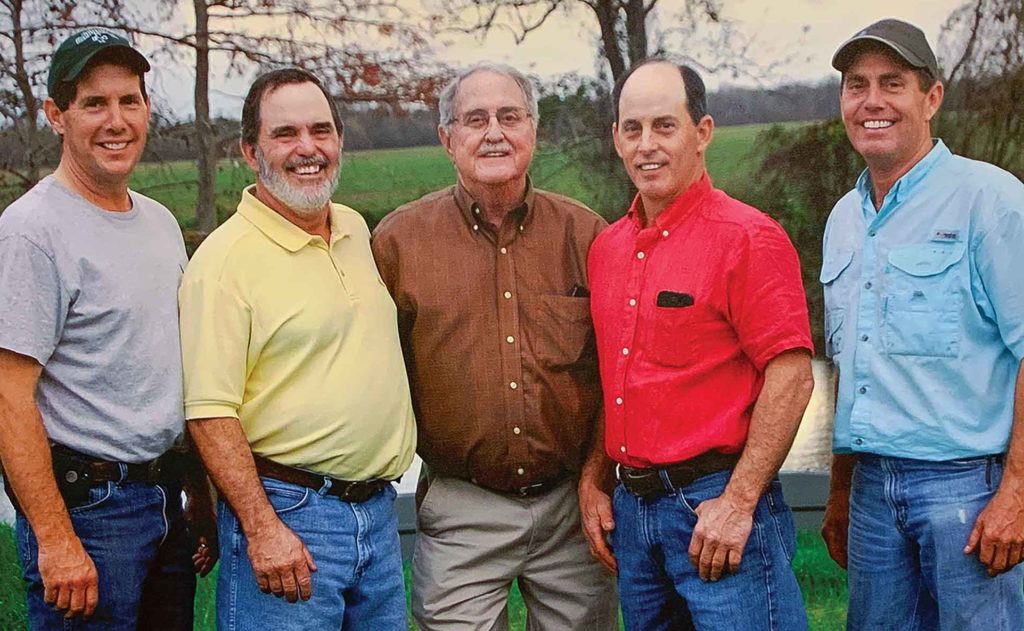 For more than three decades they worked and played together. They worshiped together and raised families together. How could they proceed as anything but together?

In reality, their interests were diverging. After years of making it work — and benefiting greatly from those partnerships along the way — each grew weary of needing four nods for every step. It was often difficult to get even two brothers on the same page.

Getting on. Over the years, each brother bought into the farm business, with Mitch being first. “Each time a brother came into the operation it was a little more difficult,” he says. It wasn’t unpleasant, just complicated.

Mark, the second son, says the business loosely compares to putting four bulls in a pen. If one decides he’s boss, the fences won’t hold. So they each took a corner.

Marty disagrees with this metaphor. “Nobody stood in a corner,” he says. “We achieved what we did with everyone’s input.”

Each has their vision of what was and what is now the truth.

Turmoil wasn’t often outwardly apparent. Financially, the business was thriving, and the work ethic ran strong in all the brothers.

“But, there was little thought or planning about functional management. We just did the work,” Marty says. They evolved as needed instead of having a real direction or plan. Little fractions started to manifest everywhere.

“We brought in experts to help improve our business. They’d look at us initially and say, ‘You’re fine,’” Matt says. Nobody was stealing, divorcing, or getting in fistfights. But problems simmered.

Mark points to pinning down universal goals as a problem, such as what expansion looked like— acquiring land close to home or wherever it came up.

Matt says experts helped everyone get an equal voice at the table.

Defining roles for each brother helped, too, but behavioral ruts had worn too deep in many areas.

What was agreed upon at the conference table didn’t always make the transition to reality.

Being family—and wanting to stay true to the dreams of their parents, dreams that were also their own — they put their heads down and kept on getting the job done. But at what cost?

Enough. By 2018, after 30plus years of partnership, the Freys hit the breaking point. In October, Mark submitted a proposal to sell his share of the operation.

The Freys were positioned well to handle a split. The farm and land companies were set up separately, as were personal homes and assets. All farm capital was assessed and approved by all. The brothers remain equal landowners. Mark also retained some equipment and leases to continue farming and to take the next step of bringing in his children.

Mitch, then 60, had been considering eventual retirement. With all the paperwork and math complete, it made sense for him to make that move. 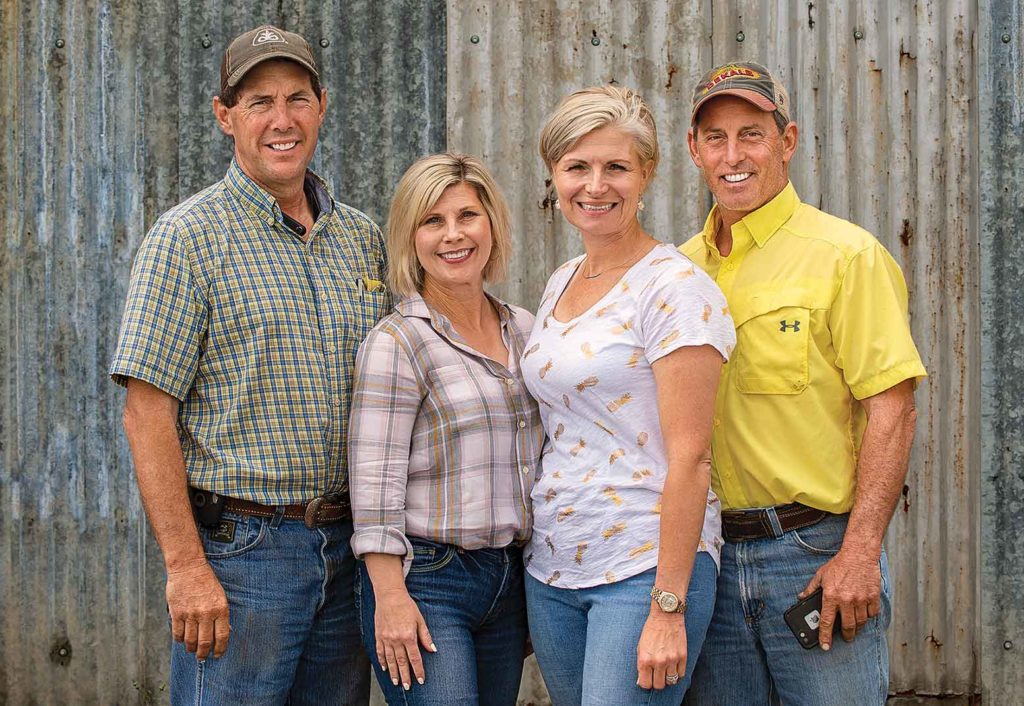 Marty and Jodi Frey, together with Shawn and Matt Frey, look forward to running a more agile business.

A new team. Whenever two heads were nodding together, it was usually Marty and Matt. That’s not to say they don’t disagree. It’s just their base beliefs put them on the same path. A path they now walk down two abreast instead of four at Four Oaks Farms.

Only one year out, they feel lighter, more agile. “Working on the farm is just simpler,” Matt says.

Marty echoes his sentiments. “There’s way less stress. We don’t have to make 10 phone calls keeping four people informed about what you’re doing and why. Everything is just melding together.”

Already they’ve increased their crawfish and sugar cane acres, a move that was always a source of contention before. They’ve also found they’re able to manage their labor force more effectively. 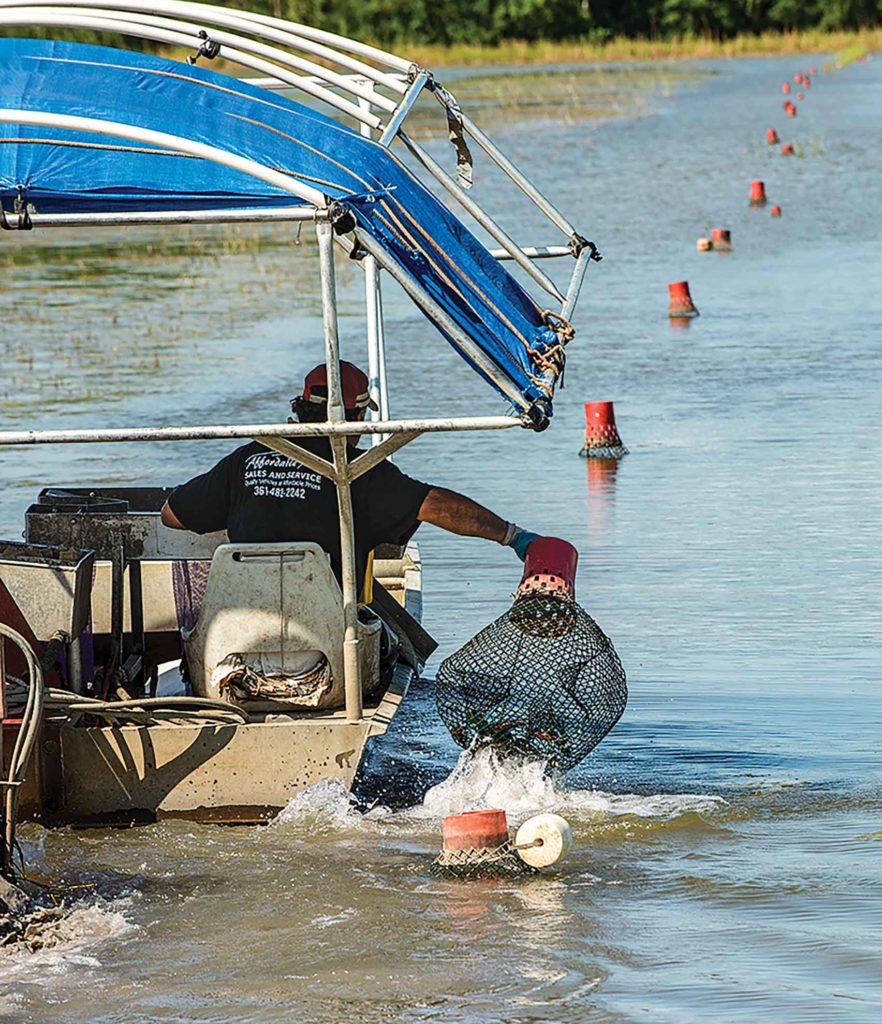 “They were getting pulled four different ways. Now we can set clear work paths for them,” Matt says. Having a proficient labor force may even mean reviving long-abandoned hobbies, like roping.

Fresh starts. For Mitch, leaving the farm felt a bit like dropping a rope that had long grown heavy. He now feels free to form actual family relationships with his siblings. He’s spending his retirement helping manage his in-laws’ flower shop.

Mark is pursuing his new dream of farming with his children, Ryan and Kayla. “I’m the happiest I’ve been in a long time,” Mark says.

The sentiments are similar for Matt and Marty.

“Here we are in our 50s, and it feels like we’re getting a new beginning,” Matt says.

Working together for a long time is no small feat, and all claim they wanted to continue the relationship. There are certainly hurts that need time to mend if they will at all. But the Frey brothers won’t deny their time together helped make them who they are. And they wouldn’t — for the most part — change that.

It’s unknown what each would have accomplished working individually from the start, or if they had continued together. What’s certain now is they must go forward on their own.