Flight of the Unicorn

Flight of the Unicorn

Silicon Valley has some unusual dialect, and one of the most interesting terms coined in the high-tech community is unicorn. That term describes a privately held startup company valued at more than $1 billion.

Venture capitalist Aileen Lee came up with that name in 2013, choosing the mythical animal to represent how rare it is to establish such a successful venture. When Lee first used the term, there were only 39 unicorns; today, the number approaches 300, including household names such as Airbnb and Pinterest.

Editors at The Furrow thought it might be interesting to see if agriculture has its version of unicorns. And, with the release of the results of the 2017 USDA Census of Agriculture, we were able to capture these rare creatures—ones that we define as counties with more than $1 billion in ag products sold.

The ag census is an incredibly rich tool; after a couple of years of data crunching, the results were released in 2019, and they span 6.4 million new points of information about America’s farms and ranches. That includes new data about on-farm decision making, down to the county level, collected by USDA’s National Agricultural Statistics Service (NASS). The census tells the story of American agriculture. First conducted in 1840, it is now completed once every five years.

NASS—the federal statistical agency responsible for producing official data about U.S. agriculture—has conducted the survey since 1997. It remains the only source of comprehensive agricultural data for every state and county in the nation.

Unicorn hunt. In his announcement of the 2017 data, NASS administrator Hubert Hamer pointed out that new tools were available to help find data—and hunt unicorns. “To make it easier to delve into the data, we make the results available in many online formats, including a new data query interface,” he says.

So that’s where we decided to start. With help from Miste Salmon in the Environmental, Economics and Demographics Branch of NASS, we decided to query out the market value of agricultural products sold by county from the census Quick Stats database. The query identified 30 counties with greater than $1 billion in market value of ag products sold—our 2017 class of agricultural unicorns. 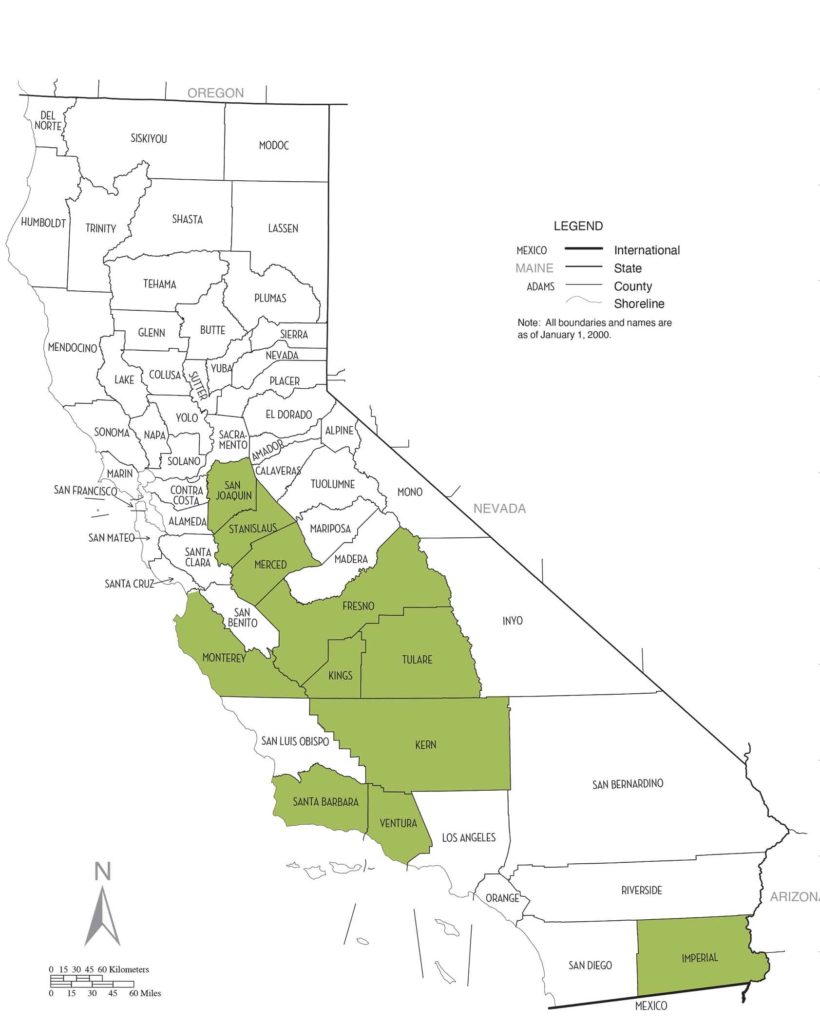 From the many productive Central Valley counties to Imperial County in the extreme south, California leads the list of U.S. agricultural economic powerhouse “unicorns.”

The list. Here’s the list of unicorns. Remember that the sales of ag products listed here, rounded to the nearest thousand, is based on the 2017 survey data. Thus, it probably won’t line up with more recent figures that you may see from your state crop reporting division.

High ag. Now that the query turned up these unicorns, the challenge is to figure out what makes them so successful at cranking out such a high value of annual production. One factor, of course, is simply geography; some counties have a size advantage. The number of counties per state varies widely; California has only 55 counties, while Iowa has 99. Delaware, the smallest state to produce a unicorn, has only three counties. With limited time and resources, we made no effort to standardize the ag output by square mile or tillable acre.

It soon becomes apparent, however, that the unicorns share a common trait: they produce value-added items and position themselves a little closer to the consumer than counties that rely more on conventional commodity agriculture. Mike Boland, an agricultural economist and director of the University of Minnesota Food Industry Center, looked through the list and described the common factor as high ag.

“The perennial crops—tree nuts, pome fruits, and so on—drive much of the high-value agriculture in California,” Boland says. “Add irrigation and bring in other fresh vegetable, and you see the effect it has on counties in Arizona as well as some of the other unicorn counties.”

He also points out that animal agriculture could be viewed as a “perennial crop” as well; an established breeding herd produces a new “crop” each year.

Animal agriculture leads the way for unicorns such as those in Duplin and Sampson counties in North Carolina (the lead photo for this story shows a set of commercial pig farms in North Carolina). Other unicorns led by livestock include Sioux County, Iowa, along with High Plains unicorn counties found in Texas, Oklahoma, Kansas, and Colorado.

“If you look at these livestock unicorn counties, all are close to dairy, pork, and beef processing plants,” Boland says. “That minimizes transportation costs.”

Being close to consumers also can have some advantages, and those advantages helped build the agricultural economic unicorn in Sussex County, Delaware.

“Poultry is king in the Delmarva area,” says Georgie Cartanza, a University of Delaware poultry Extension agent in Sussex County. “Our poultry industry allows Sussex County farmers who grow corn, soybeans, and wheat to enjoy good prices because there is such a strong local demand.”

Because of the county’s location near the East Coast population centers—a truck can reach one-third of the U.S. population within an 8-hour run—Sussex County has opportunities for other value-added crops. The county is tops in the nation for lima bean acreage, for example.

“Our farmers who are looking to diversify may look at a crop such as watermelon,” Cartanza adds. “Our location is ideal for delivering fresh products to consumers.”

Building the herd. Ryan Jacobsen is chief executive of the Fresno County Farm Bureau and a native of the San Joaquin Valley, the eight highly productive counties located within California’s Central Valley. “We are blessed with God-given gifts,” he says. “We’re the only Mediterranean climate in North America, and that allows us to grow many crops that you just don’t find anywhere else.” A century of water projects allows the desert to bloom with about 400 different crops.

The area is the world leader for almonds and pistachios, but also dominates the U.S. market in processing tomatoes as well as garlic. Jacobsen also cautions not to overlook livestock, as California is the top U.S. dairy state.

The future is not all roses in California. “We are going to be dealing with some significant regulatory issues over the next five to 20 years that could put significant crimps in our ability to produce,” Jacobsen says.

But Fresno County continues to grow, and other counties across the U.S. are nearing unicorn status. The unicorn herd likely will expand by the next Census of Ag.