Linchpin of the Harvest

This seasonal superhero ensures your farm is fueled.

Linchpin of the Harvest

This seasonal superhero ensures your farm is fueled.

Fall seasons like 2019 remind us that no one farms in a silo. Even if you feel alone in the tractor cab for hours on end, you likely have several good team members and perhaps a superhero on your side.

One such superhero of this past wet year, especially if drying wet grain, was definitely the liquid propane (LP) delivery guy.

Many farmers across the Corn Belt could echo what Mike Salz of rural Wenona, Ill., says about his propane man. “He’s the link that keeps us going. If he isn’t moving, then neither are we.”

His superhero is Doug Strong.

He has delivered LP to farms across three central Illinois counties (Marshall, Putnam, and LaSalle) for Ag View FS since the mid-1980s. Last fall, he delivered upwards of 15,000 gallons a day.

In Doug We Trust. Strong takes his responsibility to his farmers seriously. “If they run out of gas, the whole operation shuts down,” he says.

He would arrive at the plant by 5:00 a.m. every day of harvest. He must fill tanks early for farmers who ran their dryers all night. He can easily put a few hundred miles on his truck to fill tanks on as many farms as possible, then make a second trip to refill some farms before suppertime.

It’s not a job you can do on autopilot, he says. You have to be extra careful when hauling gas. And his service goes beyond the fuel itself.

Especially in years like 2019. He knows his truck, barreling down the blacktop toward a bin set-up, is a welcomed sight for farmers.

Yes, he delivers much-needed LP for their stressed dryers, but he refuels the farmers themselves, too, with every visit.

Strong has an ever-present smile and deep chuckle that is certain to relieve some harvest-time stress, if even for the few minutes he is on a farm.

“That’s what I’m going to miss most, the customers,” he says, thinking of his retirement. 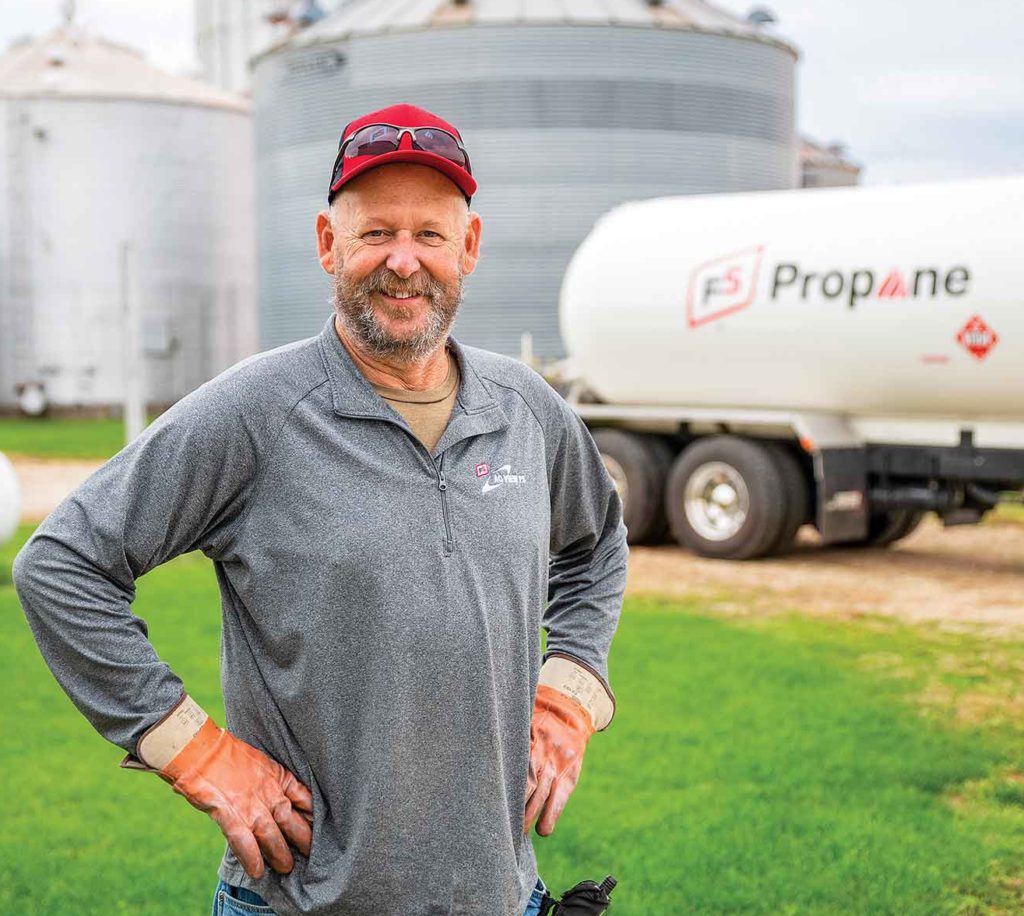 He isn’t retiring until 2021, but his interactions with farmers and their trust in him made him want to give nearly two years’ notice.

It is not uncommon for individuals in relationship-based positions, like Strong, to give retirement notices more than a year out, according to Growmark human resources manager Raelene Maas.

“The only difference between the gas Doug delivers and what the competition could bring to a farm is the trust the farmers have that he will never let them run out,” says Maas.

Who is Next? Growmark, the regional product and supply cooperative serving all FS companies, including where Strong works, finds it exceedingly more difficult to fill skilled-trade jobs. They must take added steps to attract more talent.

“There is a stigma that only a certain demographic fits positions like these,” says Maas. “But what we really look for is a person with the ability to make connections and build relationships, and who has the skills to operate highly technical equipment.”

One benefit allowed with a long lead-time like Strong’s is the chance for the new hire to collaborate with the retiree and transition relationships and trust. It also gives the new person time to earn certifications like a specialized commercial driver’s license (CDL) or a custom applicator’s license.

The problem with finding qualified and interested candidates in rural areas is not isolated to Growmark, either. They work alongside others in the industry to encourage high school teachers and advisors to promote these types of career paths. They focus on the impact these roles can have, the ability to be work outside with farmers every day, and the good compensation available.

“Individuals with a certification and associate’s degree, or similar work experience, start at the equivalency to that of an entry-level sales position, likely requiring a four-year degree,” says Maas. “It could be even more in a high demand area.”