How long does it take for a farm operation to become an overnight success? At first glance, Deb and Darin Kelly’s operation, Kelly’s Gourmet Mushrooms, only took a few months to become the hot topic in the local chef circuit in their new city. But this ignores the many years of experience they had gained before their move.

Farms come in all shapes and sizes, but the Kelly’s operation pushes the limits. The Kingston, Ontario couple makes a good living growing 400 pounds of blue oysters, shitake, and lion’s mane gourmet mushrooms a week in a 900-square foot facility. They also incubate and prepare at-home growing kits for sale online and at markets, as well as spawning supplies for other mushroom growers. Their operation has become so successful that they’ve now outgrown their facilities and are relocating to a new site that will allow them to triple production.

Long before the couple ever decided to move to Kingston from Bloomington, Indiana, the couple successfully operated a hydroponic greenhouse that sold leafy greens and herbs to restaurants and at local farmers’ markets. The couple thought that there would be an opportunity to grow mushrooms from the Agaricus family, which includes the white button, cremini (brown button), and portobello varieties that are sold in most supermarkets. It turned out to be a costly learning experience; their cost of production was at least twice the going wholesale price.

The word “mushroom” is an umbrella term for the thousands of varieties that are found in nature. A 2017 survey by Statistics Canada showed that the Agaricus mushrooms now represented 98% of the mushroom market in Canada. They are well suited for the capital intensive, high volume, production that’s required to target mass markets, but only the largest 19% of growers are big enough to have the economies of scale needed to grow them profitably. 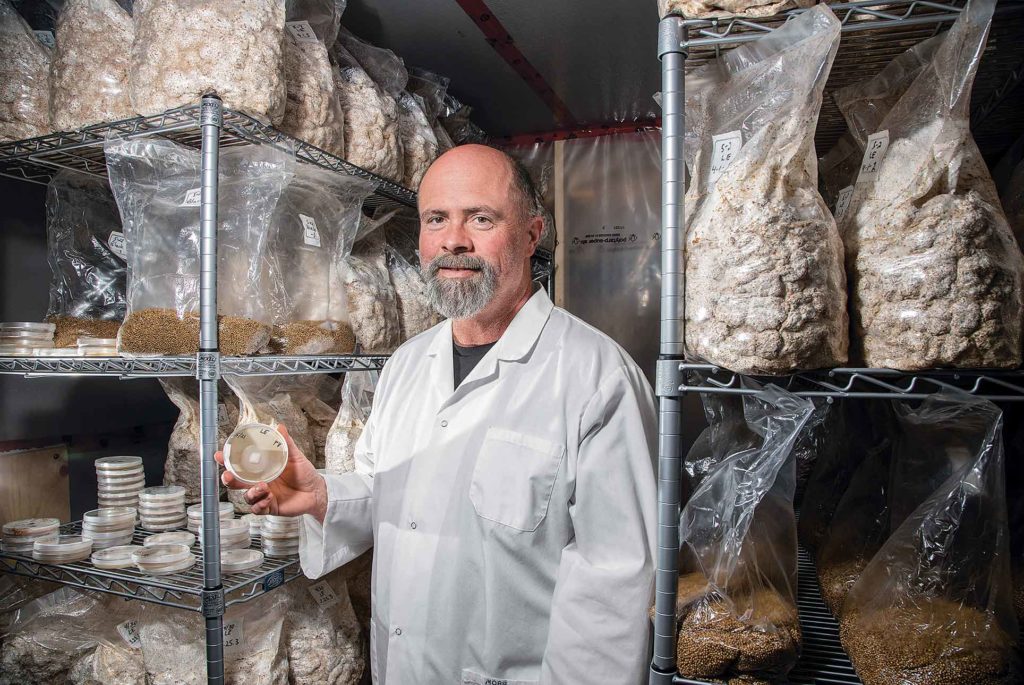 Level playing field. The remaining 81% of mushroom producers specialize in gourmet and medicinal mushrooms, which account for the remaining 2% of the Canadian market. They’re popular with small growers because their nature makes it very difficult to mechanize production. This gives small niche operations a much more level playing field to compete on.

Consumer demand for gourmet mushrooms has been steadily increasing since the turn of the century. They’re now regular items in supermarkets and have become a signature ingredient in medium and higher-end restaurant menus.

“I find gourmet mushrooms are very versatile and have a variety of different flavors that can be used in different cooking styles, ”says Will Arnaud, a chef with Otter Creek Catering in Kingston, Ontario. “Plus, they look kind of cool; a lion’s mane mushroom is an almost alien-looking thing. I’ve had so many people comment that they had no idea that it was a mushroom. Just looking at it gets people interested and talking about food.”

The Kellys felt there would be a strong demand for gourmet mushrooms in the Kingston area after they did their initial market research before relocating to the area. Darin Kelly says deciding to grow them was one of the smartest business moves they’ve made; they never dreamed it would grow so fast.

“We had some experience growing mushrooms before we moved here, but we did need to learn how to grow these new types,” Darin Kellys. “We knew we didn’t have to reinvent the wheel when we moved here. We already knew a business model that had successfully worked for us in the past. We just needed to adapt it to our new market.” 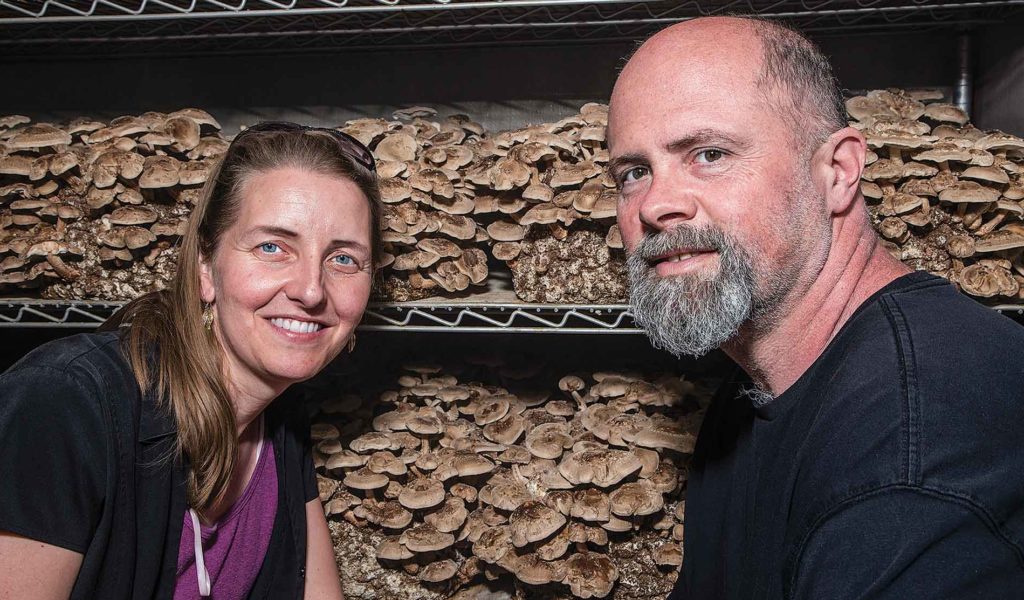 Despite their experience, the couple signed up for an intensive mushroom cultivation seminar with Paul Stamets, a highly regarded mushroom expert, from Shelton, Washington. They found the experience invaluable. It helped them perfect a lot of their cultivation techniques and laboratory work.

While there are many different kinds of gourmet mushrooms on the market, the Kellys chose to grow shitakes, blue oysters, and lion’s mane. They were tried and true varieties and were recommended by trusted grower friends. Additionally, all three varieties could coexist under the same growing conditions, so they offered crop diversity without having to build a second growing room.

The Kelly’s obtained test tubes containing tissue cultures of the mushroom strains and took a small sample of each and multiplied them in an Agar solution in Petri dishes in their lab. The original test tubes are kept in long term storage to retain a pure genetic sample that they can revert to, if necessary.

“We then use the Petri dishes to inoculate sterilized bags of millet seed to create spawn,” Darin says. “The bag will eventually become a solid white mass of mycelium. When it reaches that stage, we’ll use this to inoculate our substrate grow bags.”

The couple’s grow bags are filled with sterilized blocks of sawdust that are produced as waste products by the hardwood flooring industry. Mushroom spawn is mixed in with the sawdust and sealed into airtight plastic bags and placed into an incubation room under a precise set of growing conditions.

“Essentially, we are creating fake logs,” Darin says. “The plastic acts like the bark sealing the mycelium inside while they grow out and completely colonize the substrate. This process takes anywhere from 11 days to two months and one week depending on the mushroom variety.”

“After the inoculation phase is complete, we move the substrate blocks to the growing room,” Deb says.

“Then we poke holes in the plastic casing to expose the mycelium to an oxygen-rich environment. This sends a trigger signal to the mycelium that it’s reached the end of the cycle. It starts sending out fruit, the mushrooms, which in a natural setting would drop spores to start the cycle once again. Shitake mushrooms will send all their fruit out at once; blue oysters will send out two or three fruitings before we replace them with fresh bags. Afterward, the used substrate goes into a compost pile.” 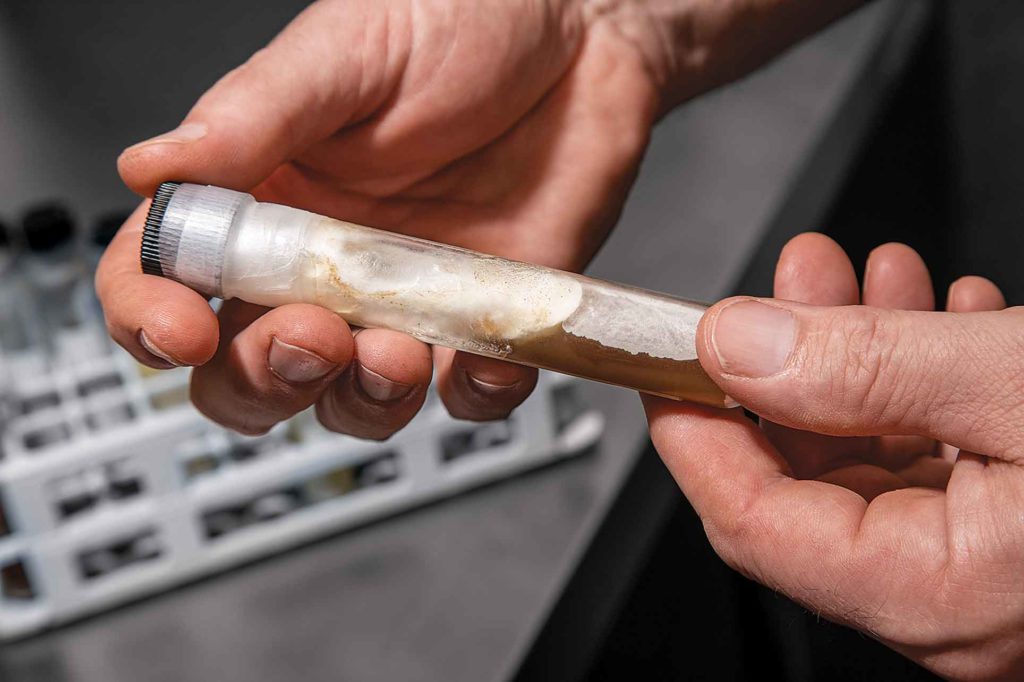 The original tissue cultures stored in the test tubes are placed in long term storage for safekeeping.

They operate in constant production cycles; every week, 250 bags go in and are taken out of the growing room. A typical shitake block will yield about 1.5 to 1.6 pounds of mushrooms, and a blue oyster will produce about 1.7 to 1.8 pounds over three flushes.

“One thing we learned at our hydroponic farm that was transferable to our mushroom operation was how to deal with chefs,” Deb says. “We knew we had to consistently supply good quality mushrooms because every chef has horror stories and bad experiences working with local growers.”

“We also knew we had to grow a consistent supply if we wanted our operation to be financially sustainable,” Darin says. “Sure, the enthusiasm and the excitement of doing something that you are passionate about and enjoy is great, but enthusiasm only takes you so far. You still need to make money to pay the bills.”

It’s important to remember that chefs are operating a business, too. Local food has a reputation for being expensive, but the Kelly’s keep their price point as close as possible to the wholesalers. Every chef is interested in local if your price is competitive, but they won’t buy it if it’s way out of line. Local only goes so far.

“We always try to make sure we’re buying and sourcing locally wherever possible,” Arnaud says. “It saves us a ton in shipping to have mushrooms grown right in our own backyard. Plus, it’s easy to go and see what they’re growing and talk to them about different varietals that may be of interest to us going forward.”

Anyone doing a Google search about growing gourmet mushrooms could easily get the impression it’s a fast, easy way to start farming. The reality is something different.

“Growing gourmet mushrooms isn’t easy,” Darin Kelly says. “If you want to try it, bite the bullet and invest the money for a seminar from Paul Stamets or sign up for one we’ll be hosting in Kingston later in 2020. If you think you’ll save money by skipping out on training, believe me, you won’t. A single mistake in the lab can cost you $3000 in just one month.” 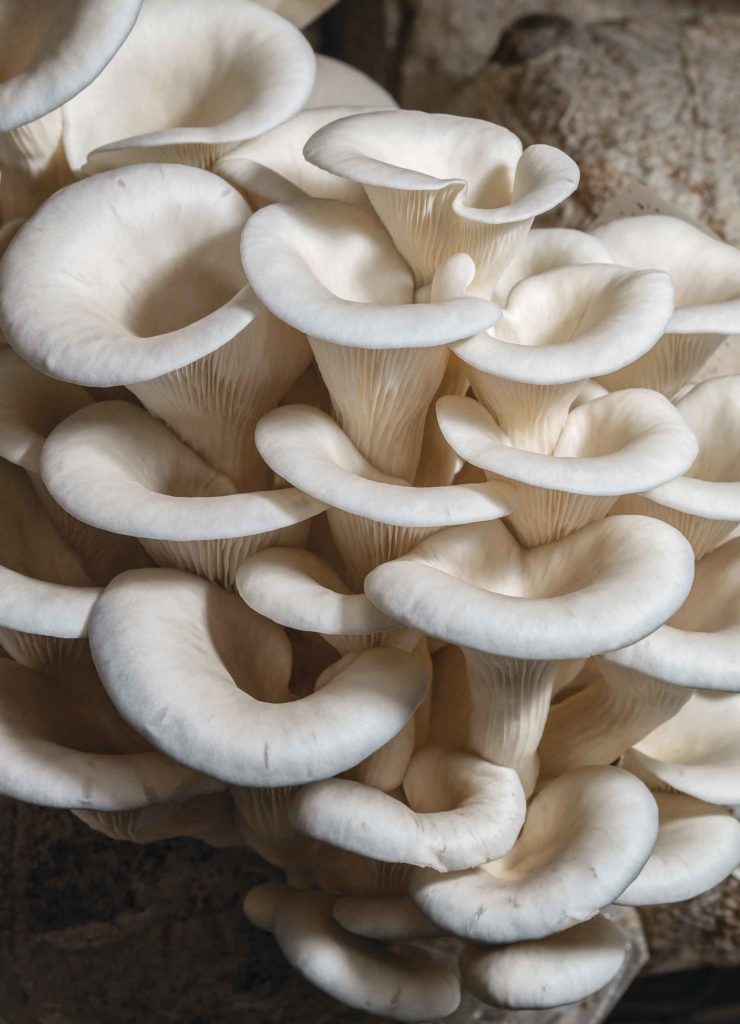 Blue oyster mushroom fruit are things of beauty when they sprout.

Two people can make a good living from a 900 square foot farm,” Deb says. “You have to be located close to a population center for this model to work. It would not work if you were somewhere really rural. Kingston is a foodie paradise; they have more restaurants per capita than any other city in Canada. But even here, we ran out of middle and upper-tier restaurants to sell to. We now sell to restaurants in Prince Edward County, Ottawa, and Toronto, too.”

“So, my advice is to do your homework, be prepared for challenges, and get training from an experienced mushroom grower,” Darin says. “It may be unrealistic to think you’re going to start from scratch and be growing 400 pounds of mushrooms a week your first year just like that guy in The Furrow did. Be prepared for a steep learning curve, but with the right dedication and passion for growing, it can be very rewarding and profitable.”