The first sheep wagon Jem Blueher rebuilt was for his own use. It served as his first home on a small piece of property he purchased tucked in the mountains near Livingston, Mont.

He wasn’t ready to build a house, so he fixed up a sheep wagon and called it home for two years. Since then, he’s refurbished and built from scratch more than 70 sheep wagons through his business, Anvil Wagon Works. He enjoys the challenge of building for others, but there will always be a special place in his heart for the cozy confines of his first home.

“You can feel the weather, the wind moving the wagon around, the rain,” he says wistfully, as if he’s forgotten feeling the weather in the winter months, too, as memory is a great editor. One incident will never be forgotten. A storm was rolling in. As Blueher stepped to his wagon, lightning struck far too close for comfort. “It knocked me over into the wagon, and there was ash flying everywhere,” he says.

While not for the faint of heart in all conditions, many describe sheep wagon lodging a romantic experience. Not amorous, more in a reminiscent way of simpler times long past. Such tight confines could certainly spark romance—or divorce—depending on the length of the relationship.

Sheep wagons are rarely more than 7-feet wide and 11-14 feet long. Cleverly worked into that space are a bed, two benches, table, wood-burning stove, main cabinet, and storage stuffed into every nook and cranny. They were the original RV, created by Wyoming blacksmiths to house open-range herders. 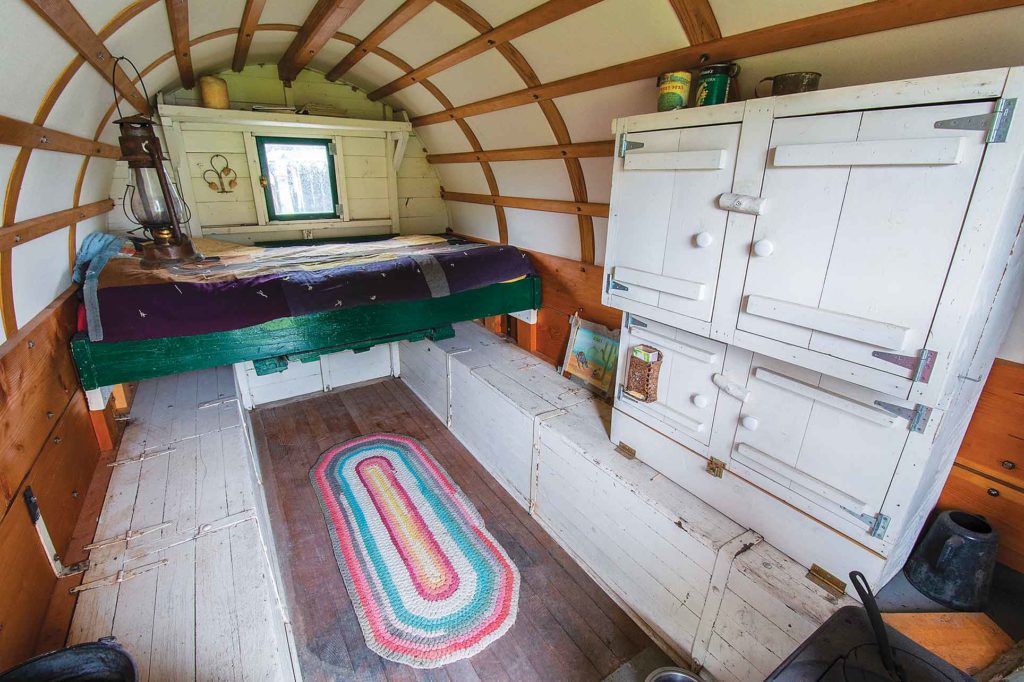 The cozy, rustic interior of one of Blueher’s guest wagons.

Today, clients use his creations for fun and function. They serve as temporary housing, or to get around ordinances that don’t allow modern RVs on a property. Some rent them out, some use them for camping, and some rancher customers even use them for their original purpose. Blueher notes the tiny home trend has drawn in some clients.

“It’s fun to make them something new using an old style. A sheep wagon is a lot more fun than staying in one of those new, square-sided things,” he says.

Revealing History. Rebuilds are always an adventure for Blueher. “One of my favorite parts of restoring an old wagon is finding the history. You never know what you’ll come across,” he says.

The undesirable task of cleaning up decades of mouse debris uncovered a 1880s silver dollar. More common finds are old letters, newspapers, or maybe the initials of an original builder or inhabitant.

Sanding layers of old paint often reveals more than aged pine or fir. Stenciling of patent numbers and makers such as Studebaker or Home Comfort Camp, as well as bright colors and details, emerge.

“So much workmanship went into these things, even if they were just for everyday use on the ranch,” Blueher says. “There’s design, pinstriping, and intricate beadwork where there really didn’t have to be. Recreating that workmanship is a lot of fun.” 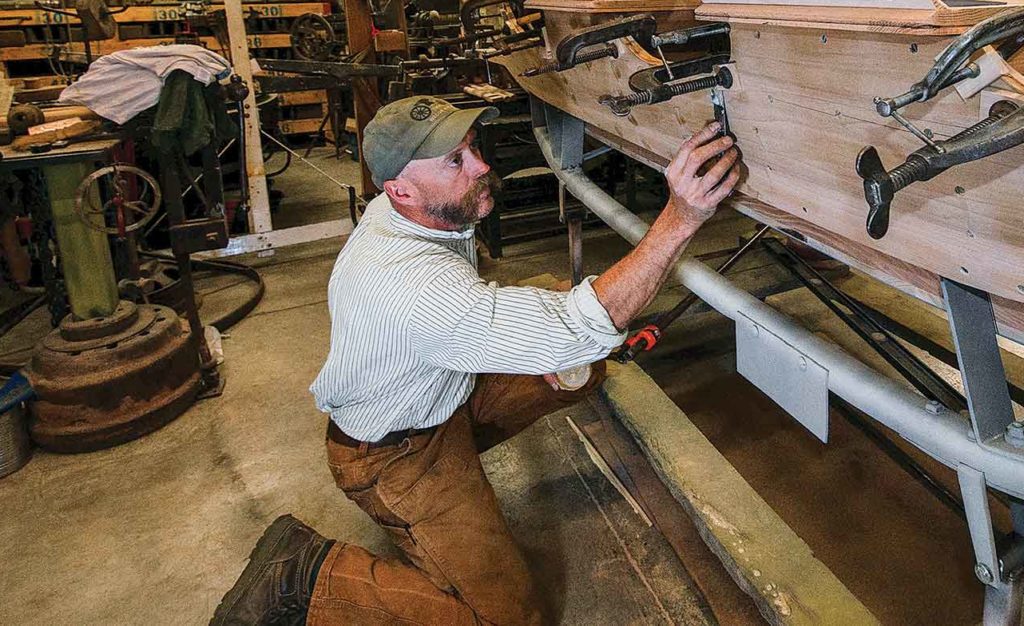 Artisan touches of the past are at the heart of his modern designs. When building new custom sheep wagons for clients, plenty of timeless ingenuity goes into each piece. He adds his own touches, too.

“I have a whole list of ideas to personalize the wagons. It makes it fun. I have a basic design, but I don’t think I’ve built the same wagon twice,” he says. Many new builds are wired for electricity. Blueher will use pearl-embellished push button switches to retain a classic feel. He takes pride in seeking out perfect period light fixtures, lanterns, and beautiful tiny stoves. Stove installations, though, are touchy.

“Sheep wagons are a tight space with a lot of woodwork and canvas. Plenty of old ones burnt down back in the day,” Blueher says. It’s more common than not for him to find charred wood covered with a piece of asbestos when taking apart an old wagon. When installing new, he’s sure to double up on heat shields.

“At first the copper roofs are borderline obscene they’re so bright and gaudy. But after a year or so, they patina and look like an old penny with brown and green streaks. They’re really pretty,” he says.

He does, however, draw the line at bathrooms. “I just won’t do it. Woodwork and water don’t mix.”

The Craftsman. Stepping into Blueher’s workspace is to immediately know this is a man working at his passion. Every square inch, centimeter even, of his massive shop from floor to ceiling, on every rafter and support, are the trappings of his trade.

There are obscure antique tools, dozens of wooden hubs and wheel spokes, and bits and pieces of wagons and buggies of every kind. A giant hand- powered bellow dangles near a forge. On every surface are old books, manuals, signs, trinkets from other artisans and mentors, and the list goes on and on. A museum would be jealous of the cache.

Sitting among the chaotic yet organized menagerie is the bare carcass of a Yellowstone Park touring coach being prepped for painting back to its original bright yellow. Very little of the original remains, though Blueher has carefully used the tired bones he was given to create a perfect replica.

In addition to sheep wagons, Blueher has restored chuckwagons, covered wagons, sleighs, buggies, stagecoaches, cannons, farm implements, even railroad carts, to name a few in his 25 years on the job. 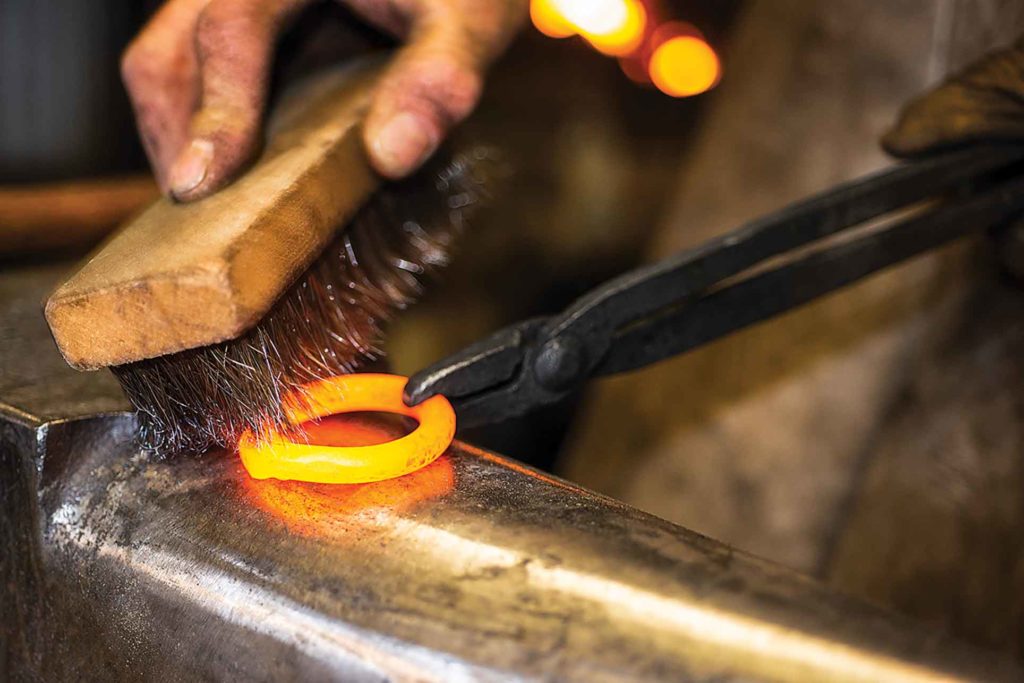 Many of his creations feature parts or decorations that can’t be bought, so Blueher makes them himself.

There are no instructions for these jobs, or for many of the antique tools he uses to complete them. That’s part of the fun for Blueher—figuring out how to rebuild a piece in almost the same way it was originally constructed. This has resulted in him become a master of many near-extinct skills. He’s a woodworker, wainwright (wagon builder), wheelwright (wheel builder), blacksmith, upholsterer, and puzzle solver.

One of the more impressive tools in his shop is a massive 6-foot-across West’s Cold Tire Setter used to apply the steel “tire” to wagon wheels. (Pictured at anvilwagonworks.com)

“I love the old tools. You can’t just go out and buy many of them, such as tools for wheelwrighting, so I have to find them or make them. I’m always restoring old tools,” he says. That often means spending time at his forge.

Blacksmithing is often used. Most of Blueher’s projects feature handforged metal pieces, both ornate and functional, he can’t otherwise find. 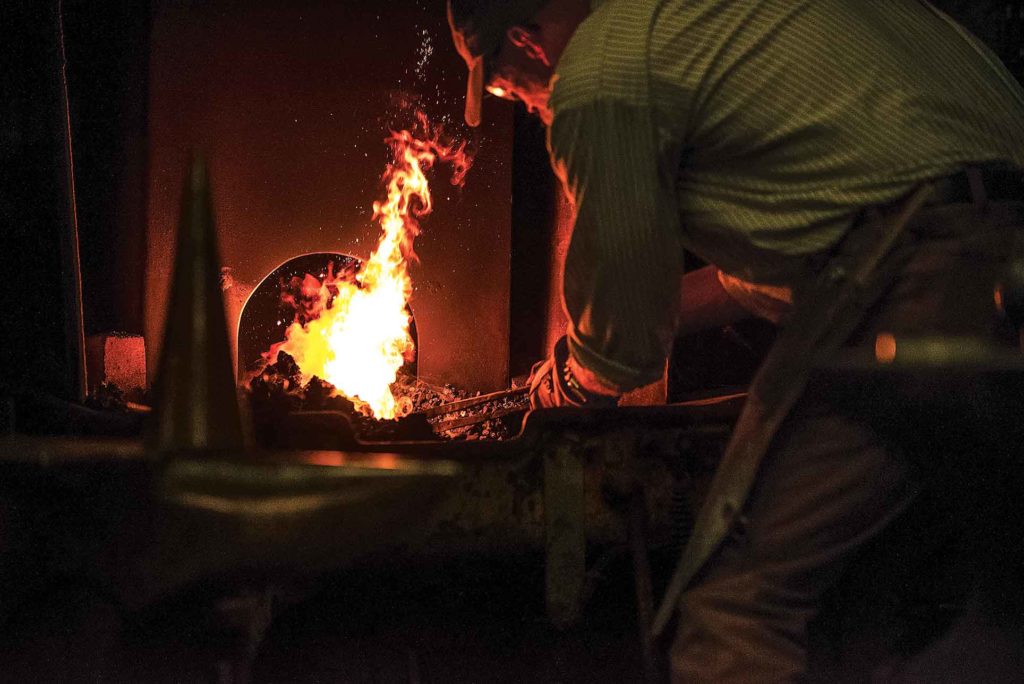 Relics, however, tend to find him. His property is home to a robust wagon and buggy scrap yard. Walking through, he points out tangled piles, identifying them as various makes and models of wagons.

Some are projects he’ll get to, others are simply for raiding. Many were donated by those without the time or money to restore them. They come with great stories, too. One is rumored to have been used in a bank robbery.

Blueher keeps his own story close at hand. His first sheep wagon now serves as a guest room—though campers are welcome to come inside if a lightning storm is brewing.

Where the Wild Plums Grow

Fragrant flowers and delectable fruit from our farm’s thicket.