According to a Chinese legend, the 7th-Century Tang Dynasty artist Wu Daoz once painted a landscape mural so realistic that he stepped into it and disappeared. Today, tourists don’t need to rely on the skills of a long-vanished artist to walk into a work of art. They just need to visit Robert Smith and partner Suzanne Piché’s farm, Bonsai GrosBec, in Saint- Alphonse-Rodriguez, Quebec. The couple’s farm has been described as an immense penjing (bonsai) landscape to Asian art experts.

Unique farms and agritourism ventures are found in all regions of Canada, but few are as distinct as Smith and Piché’s. They turned their love of the ancient Chinese art form into a profitable business. It’s now a unique tourist destination, and hundreds sign up for workshops every year to learn how to create their own bonsai. But it has been their sales of bonsais to wealthy individuals and corporations that provide the cash flow the business needs to thrive.

While their operation is just an hour north of Montreal, the drive up their winding, forested lane transports visitors into a different world. Here visitors can wander on pathways past dozens of bonsai displays nestled along a crystal-clear pond. It’s framed by the forest and the ancient rock of the Laurentian Shield. Meditative music more commonly associated with a visit to a spa wafts through the air. Everything blends together to turn their unlikely home for a Bonsai tree nursery into an Asian-inspired garden oasis. 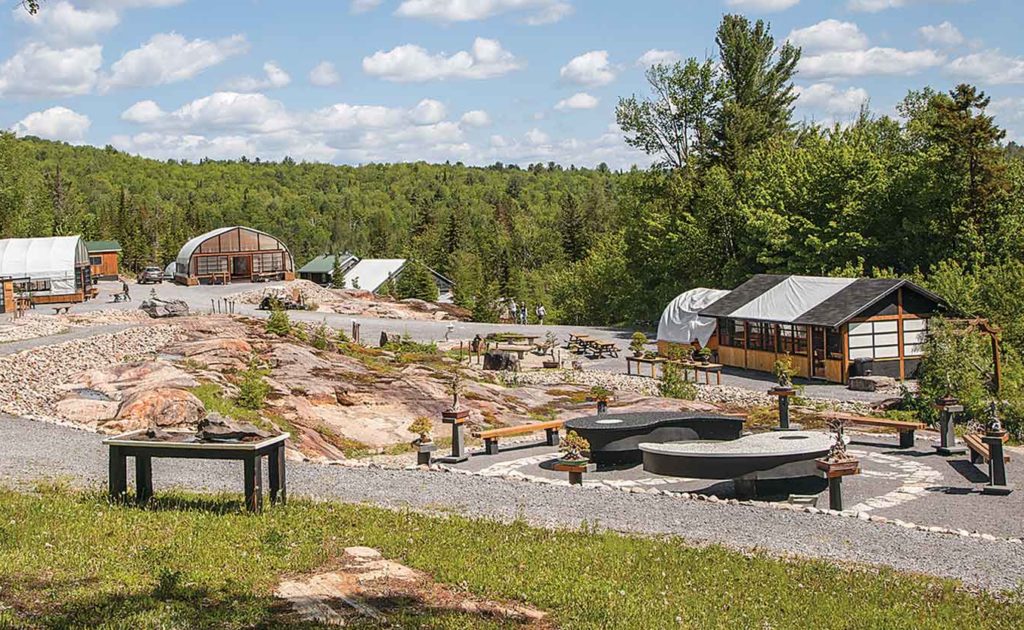 Piché and Smith’s passion has created an oriental oasis in the Laurentian foothills north of Montreal.

Bonsai is a Japanese art form that uses special cultivation techniques to grow small trees in containers and mimic the shape and scale of full-size trees, Wikipedia says. They’re often crafted to resemble the time-worn trees found on windswept mountaintops. It’s based on its older Chinese precursor, Penjing. They’re similar, but the Chinese variation creates entire miniaturized landscapes. Small figurines are often included to give the landscape an enhanced sense of scale.

The art form dates back thousands of years and is closely tied to Confucianism, Taoism, Shintoism, and Buddhism. They are more than just pretty little scenes and horticultural curiosities in East Asian philosophies. They are revered as pathways to spiritual knowledge and regeneration.

“I want people to understand that the art of Bonsai is an art of meditation,” Smith says. “You aren’t trying to create a finished product, because the Bonsai tree will always keep growing, so you will never be done working with it. It’s the journey, not the destination or finished product that’s important. It’s walking The Way (or Tao of Taoism) that’s important, and that’s how they tie directly into Taoist culture.”

Bonsai trees require daily care, Smith cautions. Every day they spend time pruning, shaping, and watering every tree on the site. Many combine this repetitive work with meditation. The commitment is closer to owning a pet than caring for houseplants. The oldest trees on record are more than 800 years and have required many generations of dedication and work. 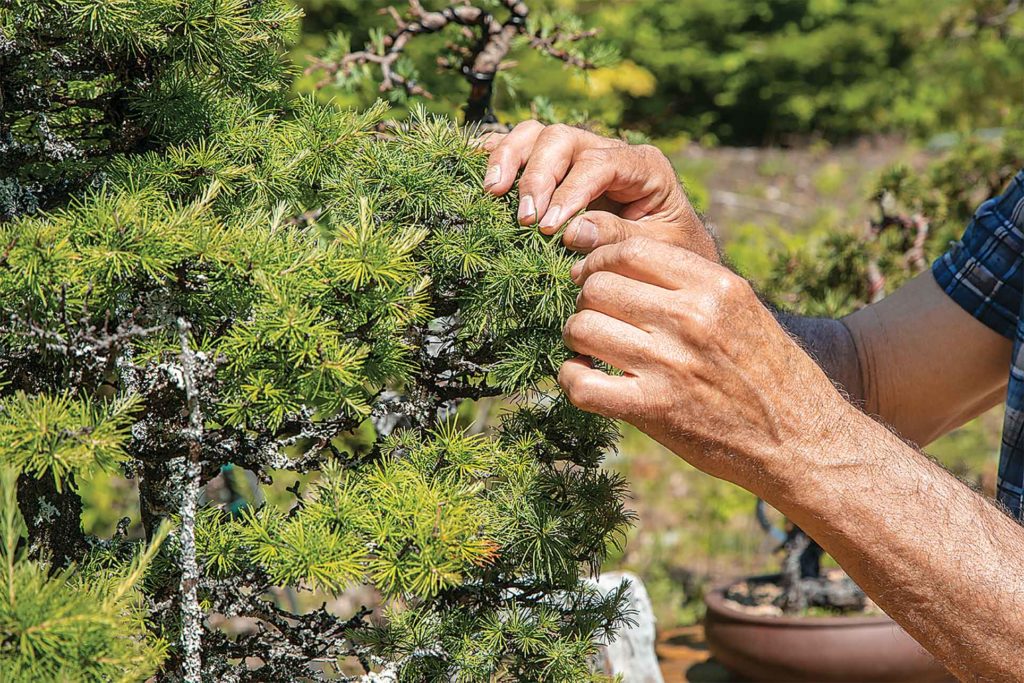 Smith wants people to understand that the art of Bonsai is an art of meditation. The goal is to balance the yin of age, as seen in the bark, with the yang of youth in the foliage.

“Bonsai trees have to be at least 25 years old to start becoming interesting; their age tells a story,” Smith says. “Time, symbolized by the age of the bark, is balanced with the youth of foliage. The yin of age and the yang of youth; when they’re both in harmony, it creates a soothing and pleasant work of art. When there’s only yin, it’s too sad. It’s too heavy. And when it’s only yang, it’s too young. It’s too exuberant like a teenager.”

Smith purchased the property in 1984. The couple dubbed it their playground and dreamed of becoming small farmers. But, they wondered how they could earn a living farming in a region where tomatoes often can’t ripen.

Smith’s eureka moment came when he took a Bonsai course at the Montreal Botanical Gardens. But turning his newfound passion into a successful business had a steep learning curve. There was very little information to help them figure out how to grow them in Quebec’s Lanaudiere region and adapt to the local soils. Plus, they had to create demand for their new product as well.

“I put together a business plan for our idea. But when I presented it to the banks to get a loan, they pretty much laughed at us,” Smith says. “They asked me what have you been smoking?”

With limited access to borrowed money, the couple was forced to start their business on a shoestring budget. Fortunately, Smith had good carpentry skills and could build all their infrastructure himself. They used recycled material as much as possible and even milled their own lumber from trees on their farm.

They tried selling bonsai trees in small plant boutiques in Montreal but quickly ran into problems, Smith says. The owners knew how to grow plants, but few had any knowledge about how to care for a bonsai tree. Eventually, word got out, and clients started to trek to St-Alphonse to buy. However, it wasn’t until they began offering Bonsai courses, and their business started to become a tourism venue, that their business took off.

“We registered as a non-profit society with a mission to teach the art of Bonsai in 1994 to help build interest in Bonsai,” says Smith. “We opened in 1995 and held our first class in the nearby city of Joliette. It attracted 30 students, and we were on or way.” 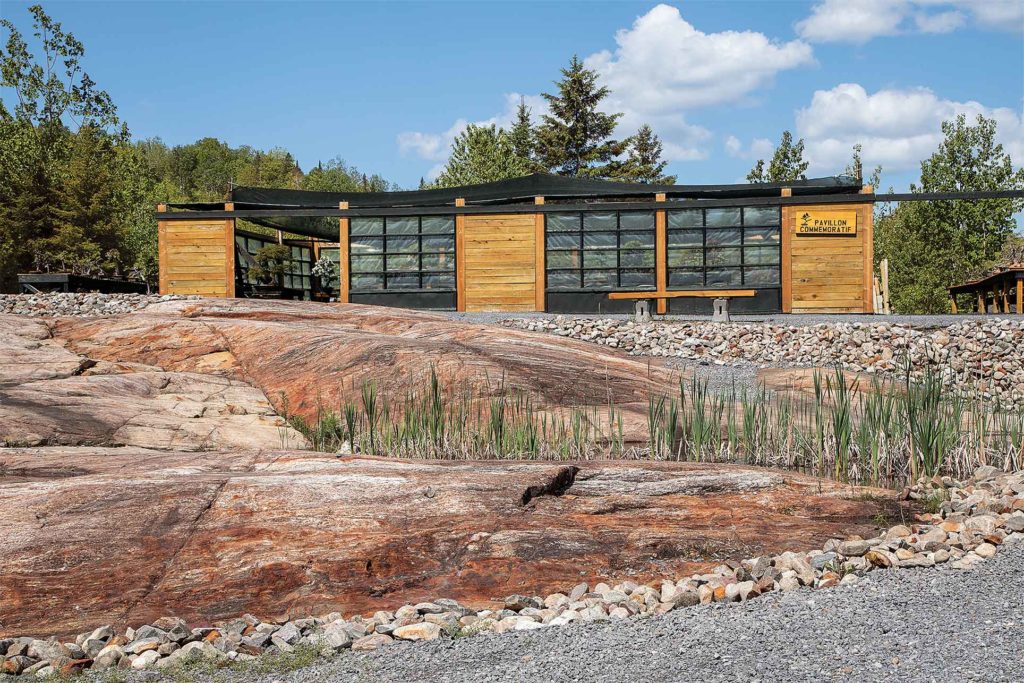 Eventually, Smith convinced Michele Andolfo, a renowned Italian Bonsai master, to head his society. Andolfo comes to Quebec twice a year to offer his four-year training on the art of Bonsai. Smith is also certified to teach, as well.

Today some of Smith’s best Bonsai trees sell out to collectors, but he’s not eager to sell to just anyone. He discourages people from buying one on a whim, because most people don’t realize everything involved in caring for one. Customers can also contract with him to care for them.

Smith and Piché’s living artworks will potentially live on long after he’s gone, so it’s important to them to pass on their knowledge. The couple established a new non-profit, Bonsai on the hill, to raise funds needed to keep their operation running as a Botanical Garden after they are gone. They hope it will provide continuity and be a source of expertise, so a new generation of Bonsai lovers can follow in their footsteps.