Companion cropping allows for a cover crop to suddenly appear when the cash crop’s canopy matures. It’s not magic, but farmers doing it admit that it is a bit of a trick. Learning to control weeds without knocking out the cover crop species is one feat that needs to be mastered, but the benefits of successful companion cropping are worthy of applause.

The past two years, four grain sorghum growers in Kansas have been sharing their experiences as they learn about companion cropping. Their effort is funded through a grant from the North Central Region of the Sustainable Agricultural Research and Education project (SARE). Originally, the goal was to see if interseeding cover crops would attract enough beneficial insects to serve as predators for the swarms of sugar cane aphids that began plaguing grain sorghum fields beginning in 2013. However, that threat diminished in the project’s first year, so the focus has turned
to testing other potential benefits, including weed control and improved soil health.

“There are a lot of farmers trying to figure out how to use cover crops to control weeds and reduce herbicide costs, so that’s become our primary goal,” says Glen Elder, Kansas, farmer Doug Palen.

The four growers planted a cover crop blend that included buckwheat, mung bean, flax, mustard, crimson clover, guar, and phacelia. This mixture was seeded along with their grain sorghum in plots adjacent to their conventionally managed crop— the former with no herbicide and the later with a standard residual herbicide treatment. 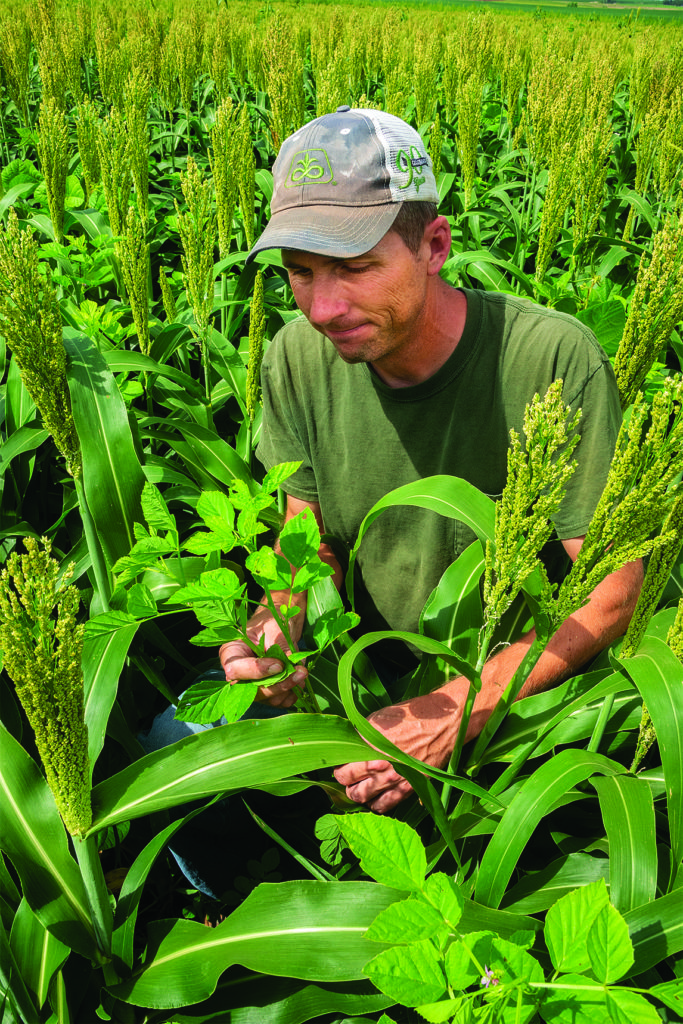 A learning experience. After two seasons results have been mixed, but the idea’s potential has been revealed. Grain sorghum yields were reduced on all four farms from 6 to 18 bushels per acre, but weed control without a residual herbicide was judged acceptable by three producers.

“We all suffered a yield drag, but some of that was offset by saving the herbicide cost, and there are soil health benefits as well,” says Palen.

Osage City, Kansas, farmer Keith Thompson has had the best experience, and credits it to the layer of surface residue that was in place prior to planting. “I could not believe how clean it stayed—and it made great grazing after harvest, which is another benefit. I’m not afraid to scale this up on more acres,” he says.

Meanwhile, Gypsum, Kansas, farmer Justin Knopf was less impressed. “Weed control was unacceptable in some areas of the plot and I don’t think my system is quite ready to quit a residual herbicide,” he says.

Knopf does hope to find a reduced level of herbicide that will minimize weeds without eliminating all the cover crop species. “I altered the plan and applied herbicide to the interseeded plot the first year and none of the companions survived. The second year I applied no residual herbicide and they grew well, but so did the weeds,” he says.

The balancing act Knopf contemplates could be aided by herbicide carryover studies being done by weed scientists at several universities. At the University of Missouri, Kevin Bradley has compared the sensitivity of major cover crop species to popular corn and soybean herbicides. See his results in a slide show at weedscience.missouri.edu.

Other benefits. Bucklin, Kansas, farmer Lance Feikert is the final grain sorghum grower in the SARE project and while he was generally pleased with weed control, he’s most excited about other benefits from companion cropping. “There are multiple benefits to the improved soil health that comes from a more diverse system—like increased water infiltration. We farm in a lower rainfall area and that gives our crops greater resilience,” he says.

Feikert also plans to expand companion cropping to more of his farm. “We’ll do sixty acres this year. The mustard and buckwheat in the companion mix really thrived and that was great to see,” he says.