Few issues have caused more anxiety in farm country than dicamba injury to susceptible soybeans, cotton and other crops. The issue has turned neighbor against neighbor, farmers against applicators and university researchers against herbicide marketers. Spray particle drift, vapor drift and applying in a temperature inversion are blamed in the majority of cases, but some researchers are finding that a fourth culprit—spray tank contamination—should share more of the blame.

“Tank contamination is one of—and perhaps the greatest—cause of the off-target movement of dicamba that has resulted in damage to non-DT (dicamba tolerant) soybeans,” says Greg Kruger, University of Nebraska Weed Science and Pesticide Application Specialist. “This is contrary to the conclusion reached in many damage investigations.”

“In many cases when investigators find ‘very consistent’ dicamba injury symptoms from one end of the field to the other they’ve been quick to blame vapor drift from a nearby field. However, I don’t believe they’re considering how tank contamination can cause similar uniform damage,” adds Kruger.

Kruger believes this misunderstanding stems from the extreme sensitivity non-DT soybeans have to dicamba and how the visual symptoms of that damage are similar across a wide range of exposure rates. “Once you’re below 1/1000th of the label rate of dicamba the injury symptoms (cupped leaves and stunted growth) look about the same as 1/10,000th of a
rate and we’ve found those symptoms at 1/250,000th of the label rate in greenhouse tests,” says Kruger.

“When looking at a damaged field, investigators would only suspect tank contamination if they saw the V-shaped pattern of damage where the application began. This occurs as residual dicamba is cleaned out of the spray boom as the sprayer moves and the pattern is typical with most herbicides, but because the visual symptoms are so similar over a wide range of rates it’s not the pattern with dicamba.” 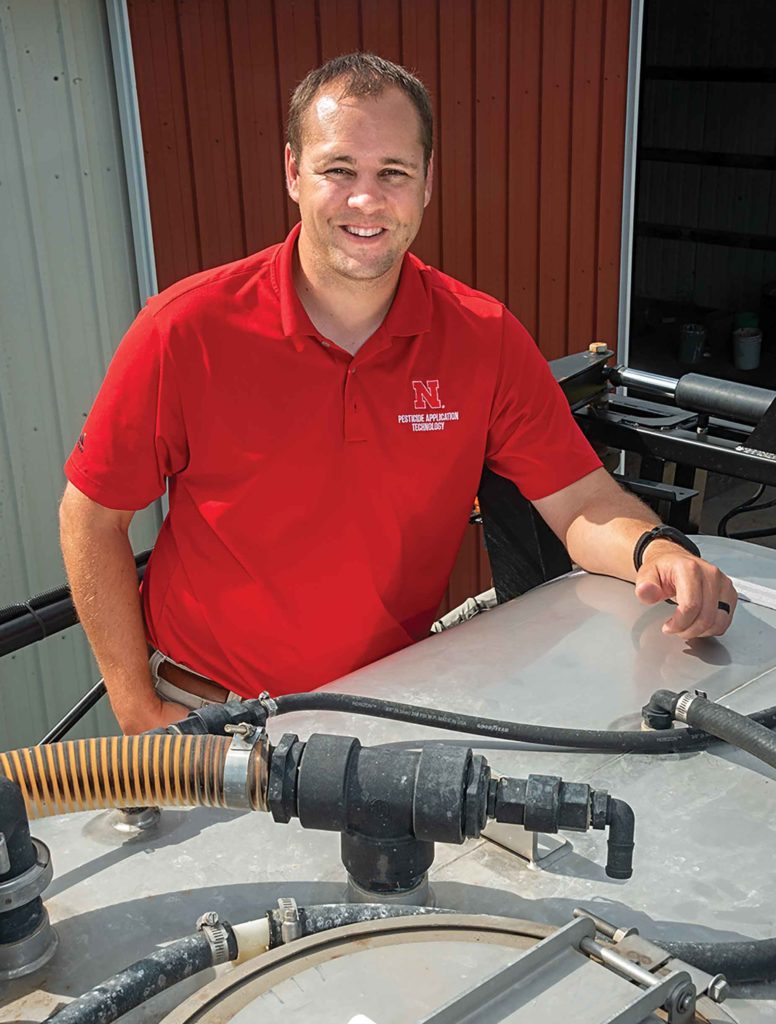 Greg Kruger says even if a sprayer is properly cleaned, residual dicamba can be released by the next herbicide placed in the tank.

Tank rinsing. Labels on the dicamba formulated products (Xtendimax, Engenia, FeXapan and Tavium) stress thorough tank cleaning procedures—triple rinsing with water and a tank cleaner are required— and applicators are well schooled on these requirements in annual training. Researchers at Auburn University and the University of Missouri found that following those recommendations reduced residual diamba levels to less than two parts per million (ppm)—well below the level of 10 ppm where yield damage to non-DT soybeans occurred.

However, in an analysis of rinsate taken from private and commercial sprayers in the field, Missouri researchers are finding much higher levels of dicamba. “A full label rate of dicamba is 4,000 ppm,” says weed scientist Reid Smeda. “In 2017 we analyzed samples from seven sprayers in Missouri and three were above the 10 ppm level with the highest being 77 ppm. In 2018 we analyzed six sprayers in Missouri and only one was above 10 ppm at a level of 16 ppm.”

In 2019 the study was expanded to adjoining states. Of the six samples from Missouri the highest level was only 4 ppm and the average was 0.9 ppm, but three samples from Illinois ranged from 59 to 61 ppm. Three samples were also analyzed from Nebraska with results of 1.6 ppm, 57 ppm and 62 ppm.

“The samples came from sprayers that had been rinsed after spraying dicamba. Admittedly, this is a very small sample, but it does indicate that more education is needed on cleaning out sprayers,” says Smeda, who intends to expand the study this season.

“Any part of the application system that comes in contact with dicamba becomes a source of contamination,” adds Kruger. “The best advice is to use separate equipment if at all possible, avoid running ‘hot loads’ with dicamba, follow the label and when in doubt wash it out. A little dicamba goes a long way”.