Chris Munson hovers a hand over the bottom of a well-seasoned Dutch oven, taking measure of the heat radiating from its sleek, black surface. “You can fairly accurately determine the temperature by how long you can stand to hold your hand a couple inches over the surface,” says the retired 30-year veteran of the restaurant industry.

Holding comfortably for 5 or more seconds, the surface is 250F or less. Around a 4-count puts it in the 350F area and a 1-count is 400F and up. For those feeling the need to be precise, an infrared thermometer will do the trick perfectly, too. Though the pioneers and trail cooks who relied on these rugged cooking devices had no such fancy contraptions.

The durable cast iron vessels did add simplicity to hearth and outdoor cooking, earning them a permanent spot on chuck wagons and those living on the fringe. A pair of Dutch ovens even made a long infamous trek with Meriwether Lewis and William Clark.

A veritable cowboy crockpot, many recipes call for minutes of prep work followed by hours of cooking and coal tending. It’s not all meat and beans — though there’s a lot of meat and beans — Dutch ovens are nothing if not versatile. 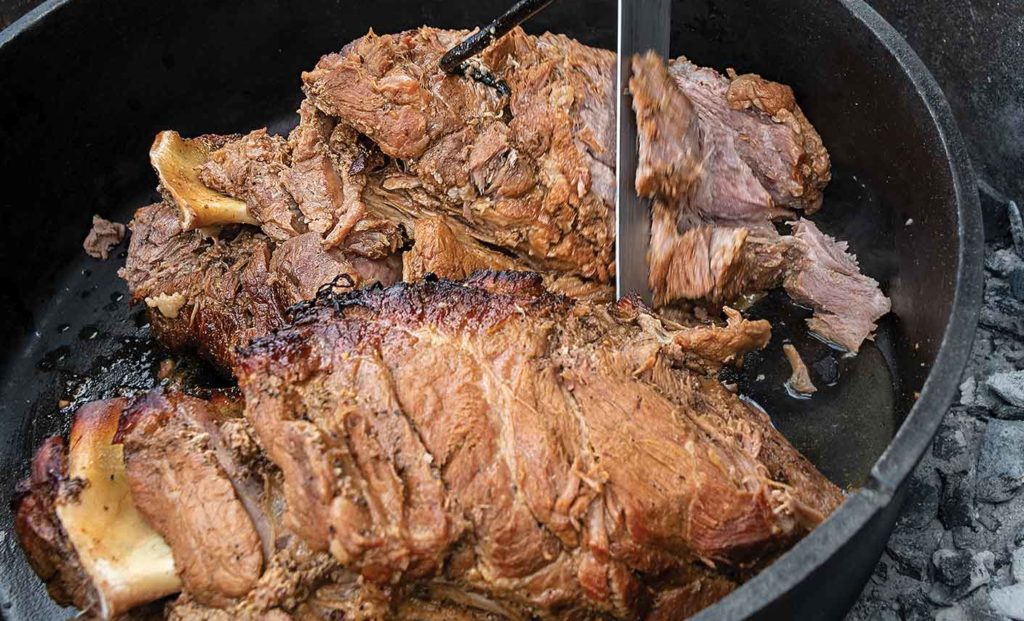 The 3-legged, heavy duty Dutch oven — sometimes called a camp oven — is an oven, stew pot, frying pan, a griddle and, flipped completely over using the lid as a pan and the pot to capture heat, can even serve as a fantastic pizza oven.

While a must-have for camping, the Dutch oven is an ideal complement to any backyard or mobile chef’s arsenal. It lends convenience and novelty to a backyard barbecue, serves as a handy portable potluck vessel, or just a fun alternative to heating up the house with a traditional oven in summer.

Cast iron converts swear food tastes better and research indicates it will even add a bit of supplemental iron to food. And they’re fairly convenient.

“All I need is my Dutch oven, a coal chimney, my coals and the ingredients and I can make a meal anywhere,” Munson says. All of which he can carry.

Quick with a story and coy with their recipes, the group of friends spent two days cooking for tourist crowds. While no official competition took place, there was no shortage of friendly rivalry, pride in recipes and methods and opinions on best practices.

While tips and advice were shared freely, some recipes were as jealously guarded as the claims of the miners who created the boom town in 1863 just 90 miles west of Yellowstone National Park.

“Nobody knows my rhubarb cobbler recipe,” says Carol McCaffree. “Not even my family.” Though the smirk on the face of her daughter, Cindy Berg, implies the recipe will not be lost to the ages.

Dan McCaffree was fine sharing some recipes, but deftly covered the details when he flipped past the “Good Biscuts” recipe scratched on a note card in his well-worn, ingredient-stained recipe collection.

Not to fear, there are plenty of recipes available online. The magic, says Gary Heil of the third team, is in the personal tweaks you make and in correctly sizing the recipes for the Dutch oven. It’s often necessary to double, triple or even quadruple quantities.

Dutch Oven Basics. The first concern for many with cast iron seems to be care and cleaning. It’s not that hard. Really. You can even use soap, bleach or stainless steel scrubbers. It won’t take off the natural patina built from years of use. Heat before and after use is the key, Munson says. After washing, the ovens go right back on the heat. 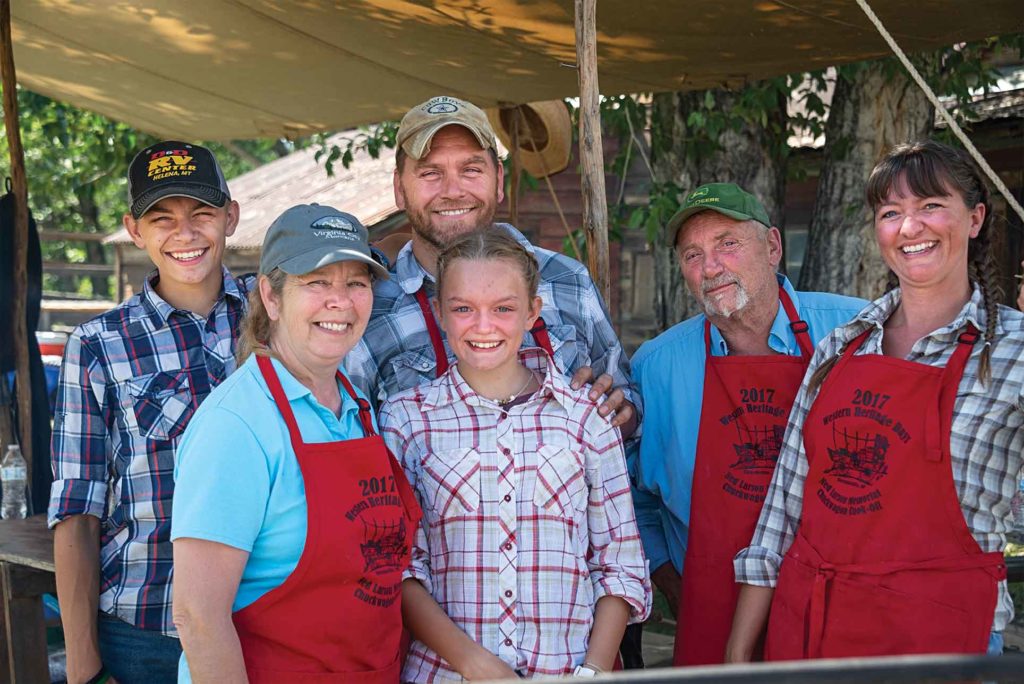 Chris Munson (green hat) gathers friends and family for help and fun when Dutch oven cooking for a crowd.

“It opens the pores in the metal and cooks off any moisture trapped there,” he explains. Once cooled, he rests a folded up paper towel over the edge of the oven so it’s half in and half out of the lid. Foregoing the oil some use, he relies solely on the wick to remove any moisture that tries to collect. “You can store them like that for a day or 50 years and still take the pan +out and cook in it right away.”

It’s back to the heat when it’s time to cook. Munson sprays his Dutch ovens with vinegar water to sanitize and then heats the empty pans yet again.

“The heat again opens the pores in the cast iron. Once it’s nice and hot, add some oil. It will seep into the pores helping prevent food from sticking and releasing iron and flavor into the food,” he says.

A common place of error is heat application and management.

“The heat for cooking comes from the top down. Most people burn their bottoms by putting too many coals underneath,” Munson says. “I concentrate coals on the outer edges of the lid. Heat from the bottom and sides rises and gets pushed back down.”

The total number of coals depends on the size of the Dutch oven and the desired heat.

For 350F, the general rule is subtract 3 from the diameter of the pan to determine the number of coals on the bottom. Double that number for the top. For a 12-inch Dutch oven to reach 350F, use 9 coals on bottom and 18 coals on top for a total 27 coals. Less is sometimes more, according to McCaffree.

“You can always cook something longer, but if you get it too hot and burn it, then you’re done,” he says.

Charcoal briquettes or hardwood lump coals provide the needed level of heat. Each set of coals provides 45 minutes to an hour of heat — perfect for rolls, biscuits or cobbler. But for allday meats or cowboy beans, coals must be refreshed multiple times. 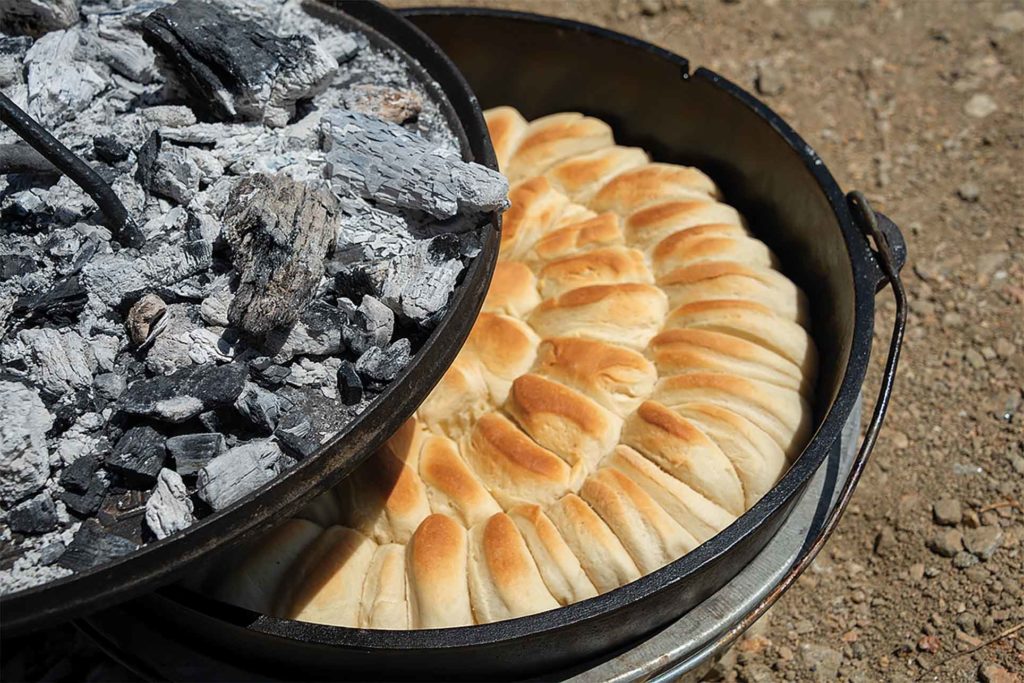 Flat or on their side, rolls and biscuits are Dutch oven delish.

For large feeds, McCaffree, Munson and Heil have constructed their own large coal boxes that can hold multiple ovens.

Recipe Tips. Breads and biscuits are a delicious Dutch oven treat. If cooking for a crowd, take full advantage of oven space.

Turning biscuits on their edge instead of flat on the pan bottom means making a batch of 100 instead of 20. “They’ll look like a flower that grew up, then you just flip the pan and serve them off the lid,” Munson says.

Heil says he uses even fewer coals on the bottom when cooking bread, sometimes burying the coals a bit to dampen the heat. “You don’t want the bottom to cook faster than the top,” he says. Often cooks will take the Dutch oven off the lower coals and let cooking finish with just the top coals.

For juicy, flavorful, tender meats, low and slow is the trick. Meats cook for 5, 6 even up to 8 hours. Marinating the meat in a carbonated beverage ahead of cooking can shorten the time while achieving the same result.

Unless you’re making stew, Munson never wants his meat in liquid. He opts to sear the meat and then raise it off the bottom of the pan with a rack or by setting it on onions and potatoes. Any added liquid or drippings filter to the bottom and help steam and cook the meat to perfection.

Timing, especially for breads and quicker cooked meats, is a learned art. Fluctuating temperatures and estimated heats are bound to lead to a charred meal or two. “Don’t worry about burning. You’re going to burn it and you will learn,” Heil says.

His favorite advice was from Idaho back country outdoorsman CW Welch. He said use your nose. If it smells done, it’s done. If it smells burnt, it’s burnt. “I use my nose and my timers. When you start to smell your food, you better start paying attention.”