Driving west along State Highway 46 on a summer evening, the setting sun is outdone by a remarkable sight just outside Wasco, California—acre upon acre of roses, a riot of pinks, reds, lavenders, and oranges brighter than the blushing clouds above.

In a year, each of those plants will be bringing its beauty to a garden somewhere across America.

Beautiful holdout. A handful of producers in Wasco harvest about 30 percent of the nation’s bare-root roses, hanging onto the city’s Rose Capital of the World title despite the fact that the cut rose industry disappeared in the early 2000s, profitable almonds beat out roses, and Arizona farmers captured a significant part of the bare-root market.

Tooth-and-nail competition is rarely this beautiful, and Wasco’s rose farmers are fighting with exciting new varieties bred to help ensure success in the home garden.

Dan Waterhouse of NeuHouse Farms grows 200 varieties of roses. He and his wife Nancy Neufield planted 5 acres of roses in 2004 to diversify their operation, which also includes vegetables, carrots, almonds, and pistachios. Today, they grow roses on 220 acres—about one-quarter of Wasco’s rose acreage—and ship about 5 million plants per year. 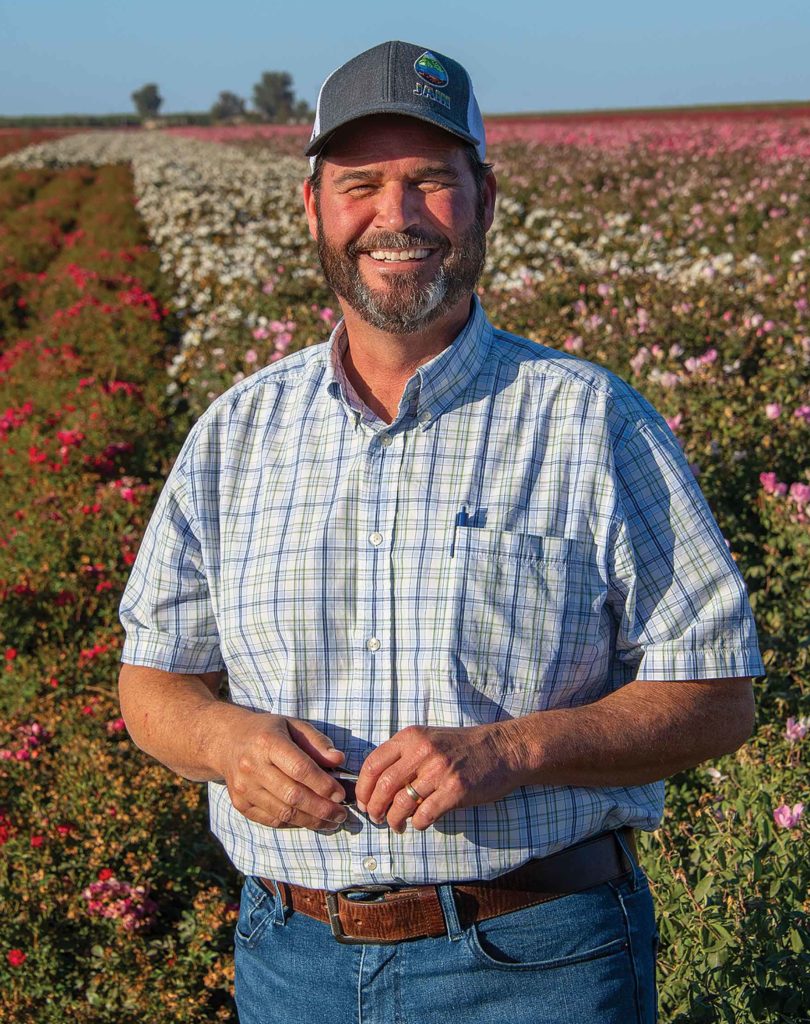 Dan Waterhouse, who with his wife Nancy Neufield is the fourth generation on NeuHouse Farms, draws on orchard experience to grow bare-root roses.

As the Waterhouses were entering the bare-root market, the cut rose industry was heading south to Colombia and Ecuador.

The immediate spark was the 2001 Andean Trade Preference Act (ATPA), which lifted import tariffs on Colombian and Ecuadorian flowers in an effort by the George W. Bush administration to provide local alternatives to coca crops. Lower labor costs, four-hour air freight flights to Miami, and the market shift to massive orders from big-box stores rather than smaller orders from flower wholesalers had already set the stage for success in South America. California’s share of the U.S. cut flower market fell from 95 percent to less than 2 percent, according to Texas A&M University.

Unique position. Though California’s cut flower industry suffered from globalization, bare-root plants have a unique position in the market, Waterhouse notes. The risk of importing soilborne pests on roots means that foreign-grown plants must undergo cost-prohibitive quarantine and treatment. That leaves the market wide open for American growers.

NeuHouse’s other crops are a great fit in the four-year rose rotation, bare-root digging fits in a window between other crop harvests, and long experience in orchards also helps with roses.

“At the end of the day, we’re really just selling roots,” Waterhouse explains. “We’ve got a proprietary blend of fertilizer we’ve gleaned over the years from other crops. We’re primarily almond and pistachio growers, so we know a little about growing roots.”

Highly skilled. For some varieties, his planting crews transplant 12-week-old starts straight from the greenhouse. For others, they cut hardwood canes, dip them in fungicide and rooting hormone, and stick them straight into the soil.

Waterhouse relies on highly skilled budding crews to graft certain varieties onto planted rootstock, a skill he says is “a little bit of an art form.” The budding teams are also key to the farm’s spectacular tree roses, two-year-old bushes with four buds each that are grafted to the tops of carefully trimmed, 36-to-40-inch understock canes.

“That’s one of the only jobs on the farm that’s paid at a piece rate,” Waterhouse notes. “On a good budding team, each guy can make $300 a day. Those guys are highly incentivized.”

Unlike grafting, harvest is highly mechanized. Waterhouse uses a modified forage chopper to cut off all but 12 inches of cane, then cuts the roots 15 inches below the soil surface and bundles the plants. Cold storage and transport at 38 degrees F helps maintain dormancy.

More confidence. Grafting is extremely expensive, but it’s necessary for cultivars that don’t grow well on their own roots. Breeders have been working hard on varieties that thrive without grafting, says Layci Gragnani, rose program manager for Star Roses and Plants, one of the wholesale nursery companies that contracts with NeuHouse Farms for production.

An own-rooted rose can be harvested earlier, cutting production costs, and smaller, which makes it more attractive to many customers, Gragnani says.

Most cut roses sold in the U.S. are grown in Colombia or Ecuador, but bare-root plants are still American-grown.

“And since it’s grown on its own root, it’s very cold hardy,” she adds. “It’s not as likely that you’ll plant it and it will die over the winter. That creates the confidence to do more gardening.”

Confidence is key to selling roses to today’s gardeners.

“I often ask my peers about roses and I think a lot of people are scared of them. They think they’ll be a lot of work.”

Colorful tags and plastic wraps over bare-root plants play a vital role in allaying concerns, especially in a grab-and-go environment like a big-box store.

“Plastic packaging gives you a little bit more surface space to explain or put a picture of the plant on it and give that shopper confidence that this thorny thing is going to be a beautiful rose in the garden in seven weeks,” Gragnani says.

Tomorrow’s roses. Waterhouse says the rose of the future will likely be a lot like Star Roses’ Double Knock Out, a compact, cold-hardy, low-maintenance bush with strong resistance to disease and insects and a season-long blooming habit—the kind of rose that gives millennials confidence.

It gives growers confidence, too. The rose industry has taken more than its share of beatings during Dan Waterhouse’s career, but there’s little doubt that standing in a field of roses on a summer evening is exactly where he wants to be.