Outside Your Comfort Zone

Outside Your Comfort Zone

We’ve all heard people incorrectly say chocolate milk comes from brown cows, but what have you done to educate those people?

Farmers in Minnesota decided they would teach urban school children about agriculture while they are in the Twin Cities for their state Farm Bureau annual meeting each winter.

“These children here in the Minneapolis-St. Paul metro schools have been far removed from the farm, and they don’t know what we do,” explains Ruth Linkenmeyer-Meirick, MN Farm Bureau Foundation director. “It just made sense for us to go to their classrooms and connect with them.”

The MN Farm Bureau Federation Promotion and Education Committee put it on the event’s agenda and reached out to schools near the hotel. They found that most will not turn down an oﬀer for farmers to visit. 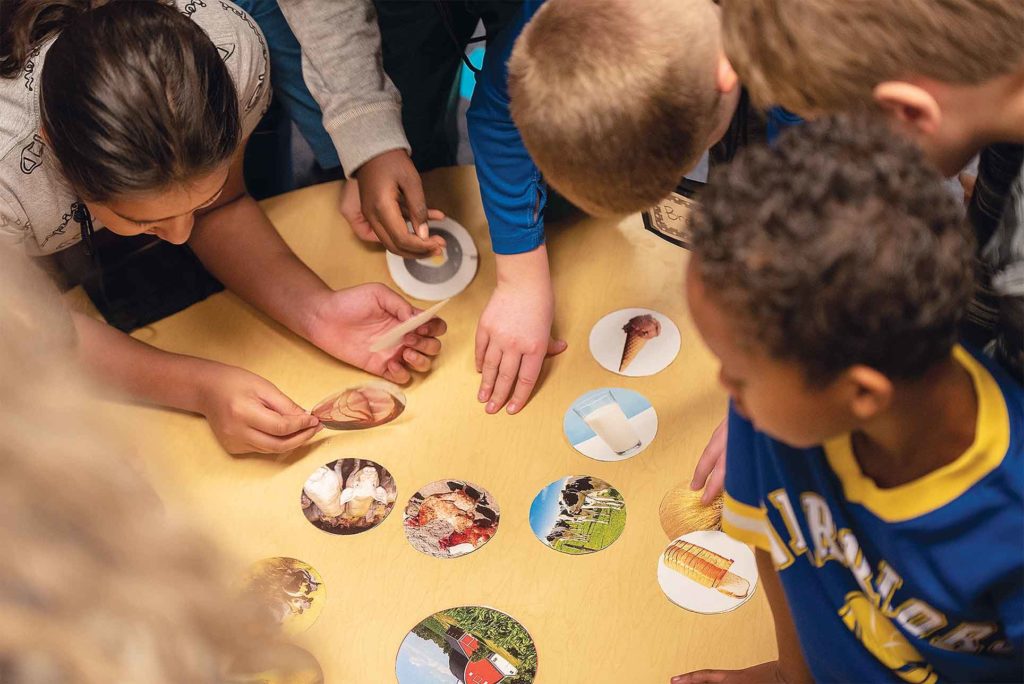 Fourth graders at Normandale Hills Elementary School in Bloomington, Minn., help one another arrange images of animals, crops, and foods so the production chain is in the correct order from farm to table.

Lesson Plan. The organizers knew this would need to be a fully prepared, in-class lesson rather than an assembly or petting zootype event. To ensure the lessons meet state learning guidelines and have age-appropriate activities, they engaged the experts: the MN Ag in the Classroom (MAITC) education specialists.

The speciﬁcally developed curriculum is partly why Shanna Tuinstra and her daughter Haylee, of Verndale, Minn., participated. They have presented about their operation in schools before, but never taught a class.

“We usually tell about our daily lives on the farm. It was interesting to see how you would talk about a topic through a lesson plan instead,” Shanna says.

Before going to the school, the group met with the education specialists to review the content and learn some tips for working with the students.

One such tip was how farmers should introduce themselves and their connection to agriculture. The MAITC staﬀ directed the farmers how to say this in a way the children would best understand.

“If you say ‘we have a cow/calf operation with 300 head and also have 2,000 acres of crops,’ that’s like speaking a diﬀerent language to the students,” says Sue Knott, MAITC education specialist. “Instead simply say ‘we raise the beef cattle that are used to make hamburgers and steak’ or ‘we grow corn and soybeans that are used to feed hogs and chickens.’”

Linkenmeyer-Meirick says the committee chooses a diﬀerent non-traditional agriculture topic each year to expose the students to the wider industry than the corn, soybeans, cattle, and/ or pigs that the kids may know some about already.

“I was nervous about teaching on a topic that I really don’t know anything about,” says Sam Runge of St. James, Minn. “But the material is just so well put together that it was easy. We had a lot of good questions and interactions with the kids.” 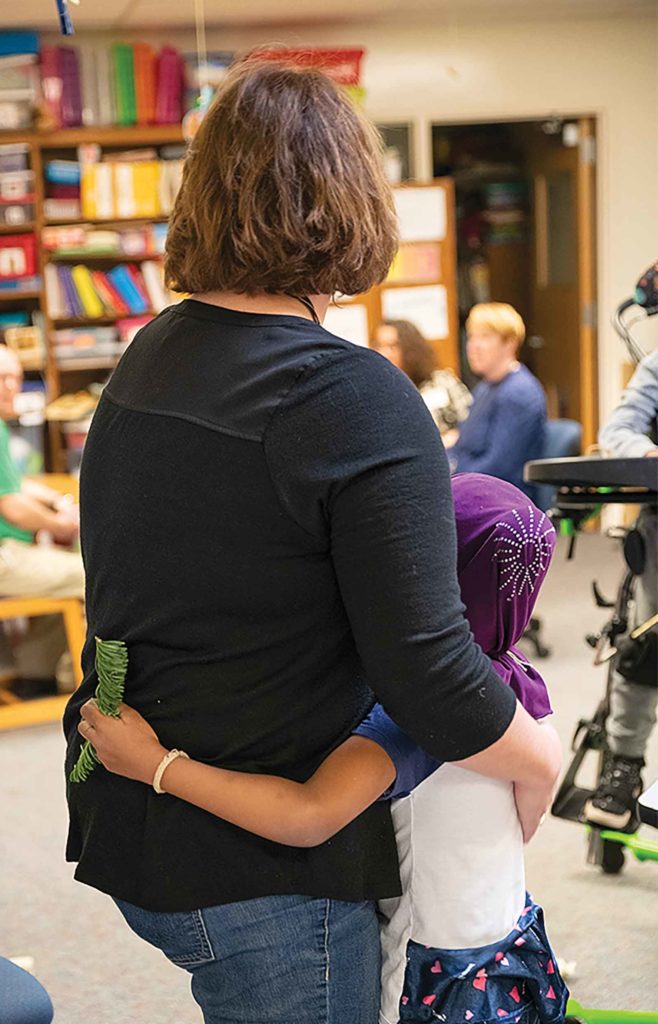 Krista Willis gets a hug from a student in the DCD classroom.

The lesson kits included worksheets about trees, hands-on activities identifying coniferous trees by their needles and tree age by their rings, and a book to read aloud to the class.

“In the special ed. classroom, we made a huge connection over something as simple as age,” says Krista Willis of Willmar, Minn. “Being able to use the rings of the tree cookie as counting instruction and compare that to their age was really good. And they loved feeling and smelling the different branches.”

Tree cookie is the term for a thin, round slice of a branch. Each child got one to decorate in class, like you may have done at camp.

Shelly Gilbertson, of Puposky, Minn., made connections with the second graders by thinking about the whole forest. “It was fun watching the kids realize, as far as you know, it’s something that we see every day but they don’t.”

The milk question. Even though the lesson focused on trees, it also included an activity that illustrates how the whole system connects and answers the age-old milk question.

“I got a new one this time,” says Sarah Kuschel, MAITC regional ag curriculum specialist. “One child asked: what do coconut cows look like.”

The children were all given images of crops, animals, or produced food. Together, they layered each around a main farm image to diagram production chains, giving a clear visual of how food is produced.

For the dairy example, the kids saw it starts at the farm with the cow, who produces fluid milk that is then processed into ice cream and cheese.

Go Spread the Word of Ag. Almost paraphrasing a priest at the end of Mass, the parting words for the volunteers before they went to their next sessions were to share this at home.

“We need you to carry this message back to your communities, to your kids’ schools, and to your grandchildren’s schools,” says Ann Marie Ward, MAITC Foundation director. “Please use these and the other Ag in the Classroom resources available online.”