Farmers are all about the soil because it plays such a vital role in their life and legacy. However, like the air and water, soil is a resource for everyone but communicating its value to nonfarmers poses a challenge. That effort has some soil scientists turning to a new teaching tool—a paint brush.

“Art is a universal language and I’m finding that painting with pigments derived entirely from the soil is a great way to get people thinking about the soil—audiences that would not typically be interested in the ‘dirt’ under their feet,” says Kirsten Kurtz, manager of Cornell’s Soil Health Laboratory.

Kurtz teaches soil painting to classes at Cornell and paints on commission at her studio in Ithaca, New York. “I also organize community events where I use soil painting as a vehicle to inspire participants to not only celebrate the beauty of soil, but to think about soil as an essential natural resource that we depend on for our food and fiber,” she says.

“Soil is degrading at an alarming rate and many policy makers and the public are unfamiliar with the challenge of protecting it. Painting with soil is a creative way to encourage conversation on the importance of soil and the threat of soil degradation,” adds Kurtz. 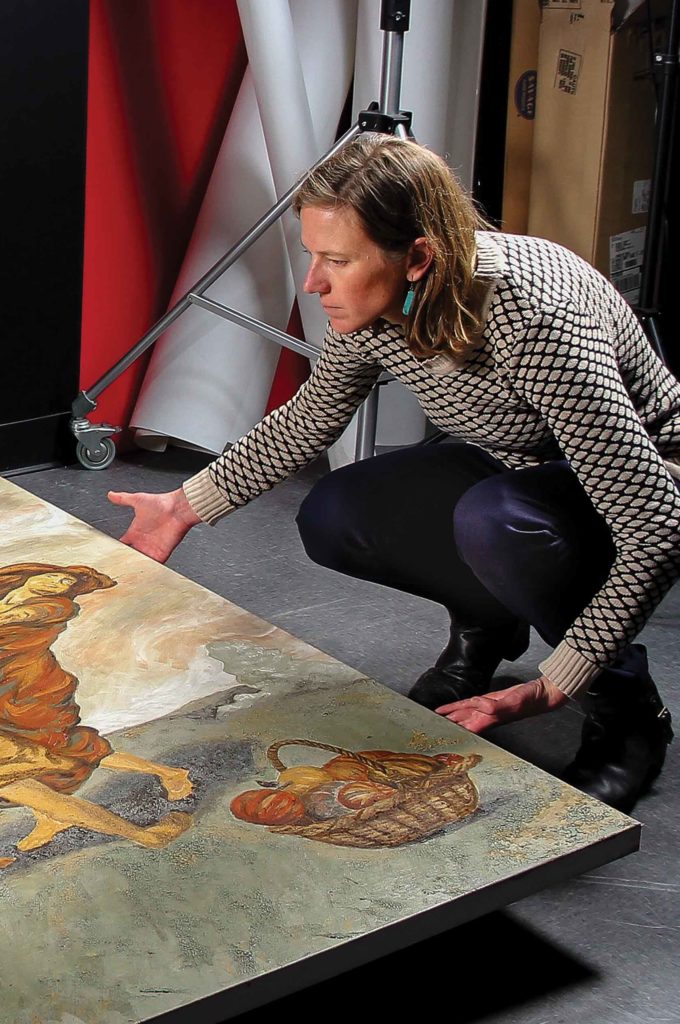 Kirsten Kurtz worked with a team of soil scientist/artists to paint the image of Sisters in Soil as part of an international soil painting contest sponsored by the UN’s Food and Agriculture Organization.

Spreading the word. Initially hesitant to admit her artistic passion among her disciplined soil science brethren, Kurtz soon learned that art and science were similar in their need for patience and detail. “I was analyzing soils from the South in our lab and was fascinated by their red color, so I saved samples. In a later painting class I used soil paint instead of acrylic and finetuned the technique.”

Among her initial efforts were portraits of herself, parents and siblings who shared life on a 200-acre organic farm in New York. Exhibiting those at a World Soil Day event at Cornell in 2015 drew the attention of the Food and Agriculture Organization of the United Nations, who invited her to enter an International Soil Painting contest as part of World Soil Day in 2017,

“At that event I worked with a team of artist/scientists to paint the Three Sisters in Soil, depicting the Native American practice of companion cropping. Also, we had canvases for people to try their hand at painting with soil.”

Kurtz’s success led her to launch a Soil Painting Initiative and a website www.soilpainting.com, where she explains her technique of mixing sifted soil with water and clear gesso—a mixture of white glue and gypsum dust.

“My paintings have five layers of soil, so they become three-dimensional. I’ve gathered soil for every color I’ve needed except for a lovely shade of green which comes from a clay soil in France. It’s used for cosmetic facial masks and I’ve had to buy it,” she says. 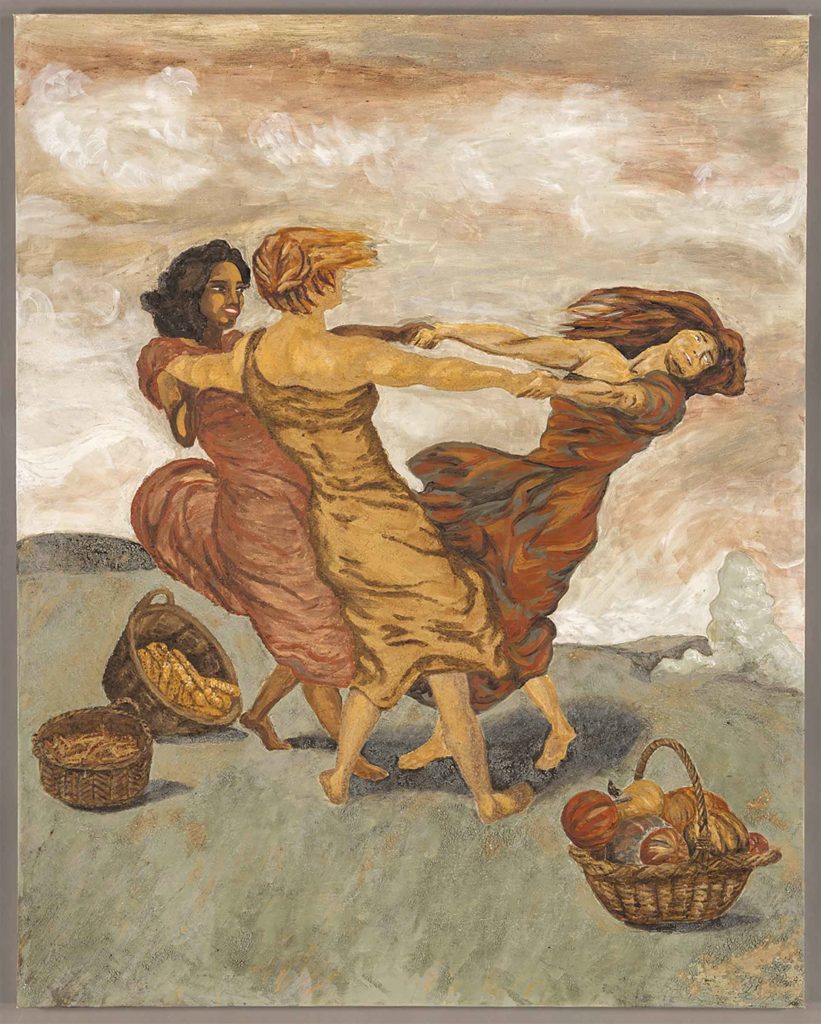 Other artists. Painting with soil likely dates back to cave art done in the Neanderthal age. However, Kurtz’s website includes links to several modern day soil painters, including former USDA-NRCS technician Jan Lang, who’s talent is highlighted by a series of 14 soil paintings she did to commemorate the bicentennial of Lewis and Clark’s Corps of Discovery.

“With landscapes it’s hard to get colors just right, but when I paint with soil I use colors that come from nature, so they’re exactly right,” says Lang.

Lang’s inspiration came from the detailed descriptions of landscapes and soils in the expedition’s journals. Her paintings are displayed in the Kellogg Soil Survey Lab in Lincoln, Nebraska. 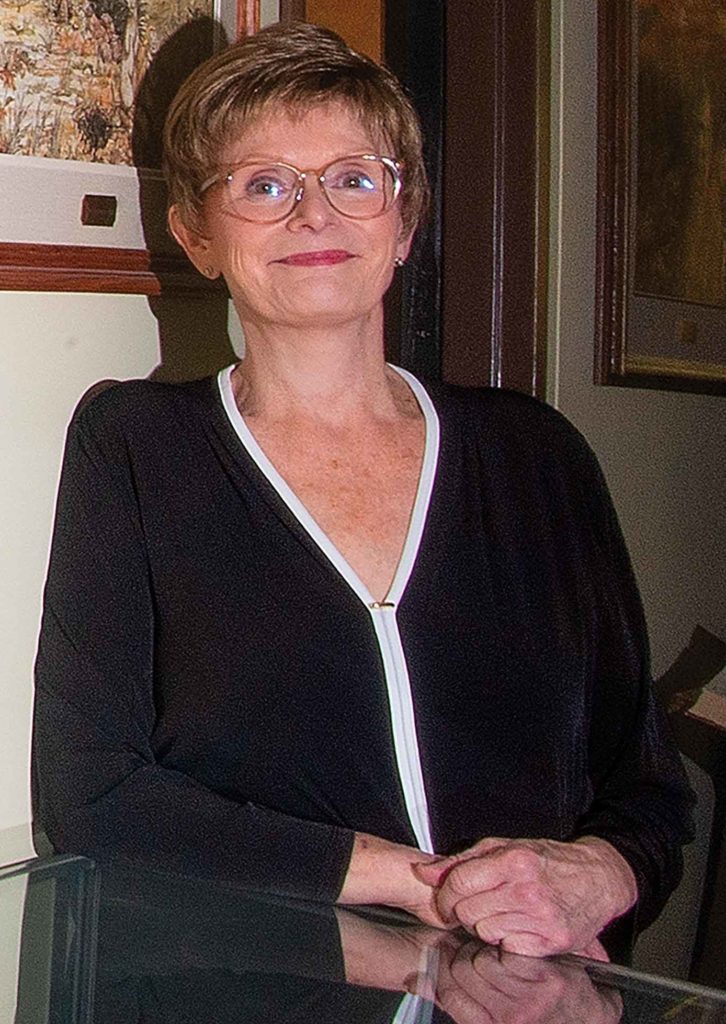 Robinson, who also uses soil to paint landscapes, says natural forces at work in the soil can yield nearly every color needed. “Redoxic reactions—which occur when some soils are seasonally saturated—can produce gray, blue or even green colors if you dig deep enough,” he says.

NRCS’s National Soil Survey Lab has additional ‘how to’ information on soil painting and soil color. Also, an interactive map aggregates all soil color observations soil scientists have made and color changes at various depths.