Dr. Jekyll and Mr. Hyde would feel right at home at Cannamore Orchard near Crysler, Ontario. It’s a family friendly place by day. A place where parents and grandparents can bring children to pick strawberries, apples, pumpkins, hop on the cow train, visit their petting zoo or wander through their giant hedge mazes throughout the late summer and early fall. But it’s a different story on weekend nights in late September and October, a.er the sun goes down. .e orchard transforms into, “Acres of Terror” and scary creatures come out to play. Creepy clowns and gore-soaked zombies might lurk around any corner.

Halloween is no longer just for kids; its growing popularity has made it big business in North America. It consistently ranks in the top eight events that Canadians and Americans spend money on in the National Retail Federation’s annual spending survey. Things that go bump in the night have been very good to Dennis and Claire Taylor, the outgoing owners of Cannamore Orchards/ Acres of Terror. The couple launched The Spooky Wagon Ride, a Halloween-themed hayrack ride, in 1992 as a way to keep drawing customers to their farm store through October. It’s grown into Acres of Terror, the largest Halloween attraction in Ontario. COVID-19 permitting, they’ll have one great final season before Mat Kelly, their longtime right-hand man, takes over management in 2021.

Extend the season. “We first heard about hayrack wagon rides and the Haunted Halloween season in 1990 at an Ontario Farm Fresh Marketing Association workshop,” Dennis Taylor says. “We toured one the next year. I thought it was so cheesy that I was worried people would demand their money back. But when people got off the wagon, they all talked about how great it was. That’s when I realized this will work; you don’t have to be a Warner Bros. or a Disney to put something like this on. We went home and started The Spooky Wagon Ride the following year.” 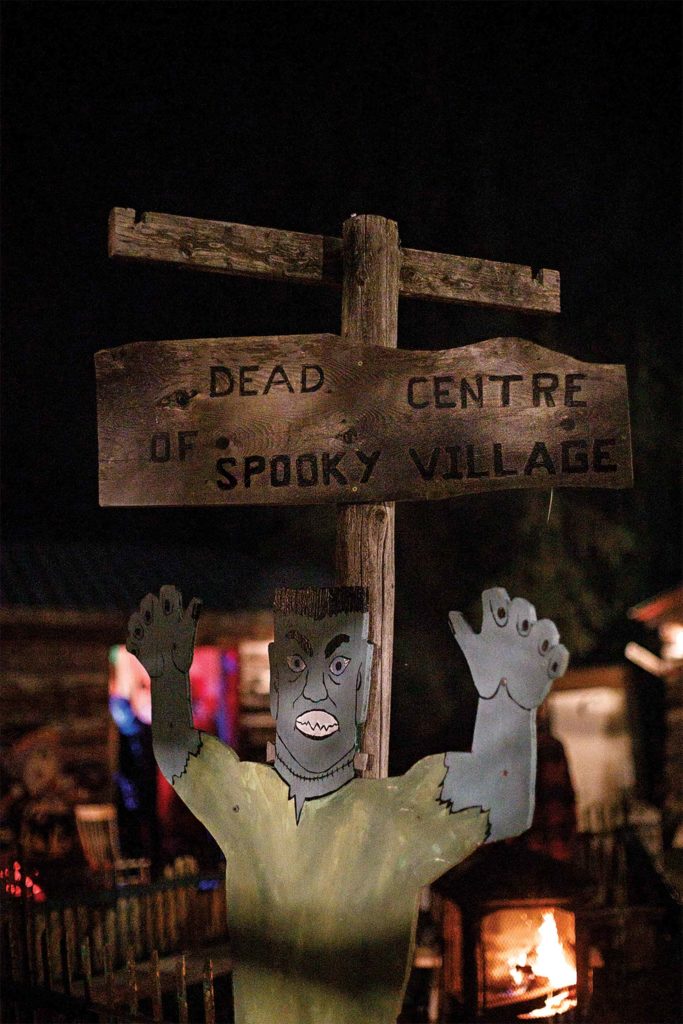 The ride takes visitors through the woods at night. A wagon witch, a narrator and guide, set a foreboding tone as they wind past the Halloween scenes set up on stages or structures along the way. Their spiel is based off a standardized script but they are allowed to change their lines to fit the wagon or their character’s persona.

Their ride was quite modest the first year; just two small wagons, but its popularity grew quickly. Soon, they were expanding the ride over a wider area and eventually built a new road through the woods to accommodate the thousands who showed up.

“We added a small haunted house and a fog maze while we were doing this,” Taylor says. “The fog maze has been a big hit, but for the life of me I still don’t understand why people like it; maybe because it’s disorienting. The haunted house led to the spooky village, seven houses around a Halloween theme. We’ve kept adding more over the years until we have what it is today.”

They add or change three or four scenes each year. Taylor says they beg, borrow, steal, adapt and change ideas wherever they can find them. Most new ones are collaborative efforts dreamed up by their workers and other times they resurrect scenes they haven’t used for 10 or 12 years. Occasionally they purchase professionally made magic scenes from magicians.

“The best scenes mix the old and the new,” Mat Kelly says. “It has to have something that people recognize as Halloween-ish or scary; like a witch, a gallows, or a guillotine. But, it’s got to have a new or creative twist to it. Usually ones with a jump scare work best for ones performed for The Spooky Wagon Ride; something is hidden and pops out at the audience when they aren’t expecting it.”

One long-running scene features giant spiders dropping out of the trees into the wagon. Some are so startled they’ve jumped from their seats and laid flat on the wagon floor. It’s such an audience favourite that when they removed it one year, people noticed and demanded them back.

“A car chases the wagon in one scene,” Taylor says. “It’s such a hokey scene; we’ve tried to get rid of it a couple of times. But whenever we did, we got innumerable complaints. Where’s the car?” 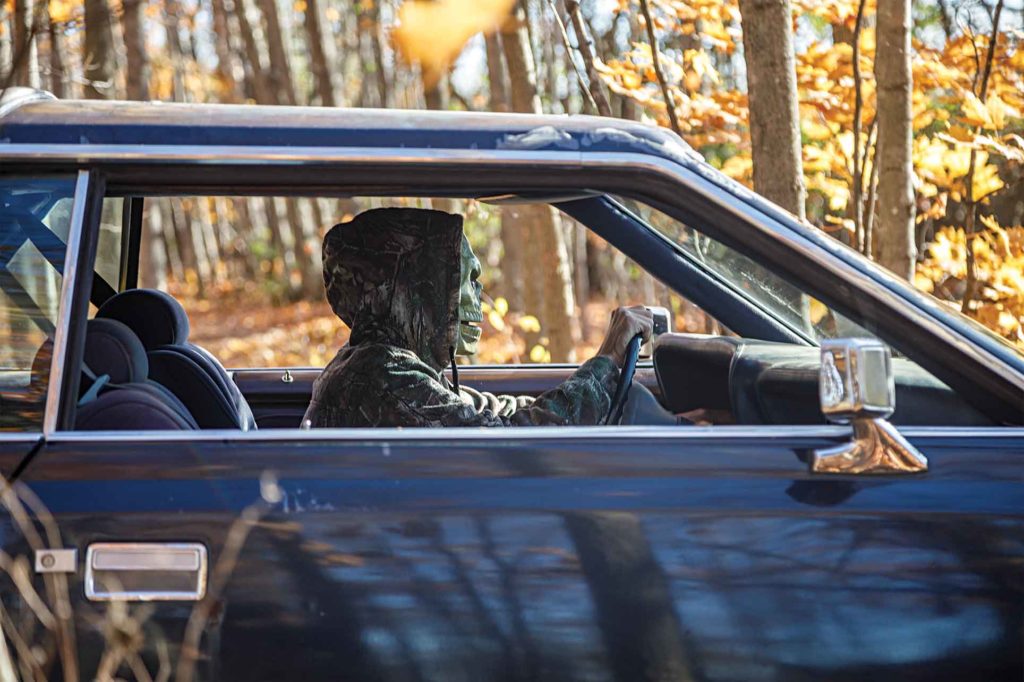 Visitors complained so much when they axed the car chase scene that they brought it back.

Cannamore Orchard’s workforce swells by about 100 people when Acres of Terror is running. Many come from community theatres in the region. The haunted house is manned by local high school music departments as a fundraiser. They get a percentage of gate for their labor; it’s amounted to $350,000 over the years.

Because labour is such a critical part of their success, they make sure working there is an enjoyable experience. For example, each scene involves at least two people, so no one has to stay in the woods by themselves. Every scene is conducted on a stage or a structure so actors can shelter in during inclement weather.

Workplace safety. “We try to minimize chances that anything could happen to our workers,” Kelly says. “My favourite scene is one where an actor is hooked up to a cable system and shoots up into the air. We’ve installed safety lines and brakes so it’s very simple and safe to operate, but it’s still the one that causes me more stress than any other because we have to be sure the actors have their harness on properly.”

“Every haunted ride seems to have someone chasing the wagon with a chainsaw; it’s standard fare. I suggested it to a fellow who wanted to start his own ride. A year later, I asked how the chainsaw scene was working for him. He said people really liked it. For some reason I said, ‘and you make sure you have no chain on the chainsaw, right?’ There was this stunned silence. He said, ‘no, we have the chain on the chainsaw, it never goes near the wagon.’ I said, ‘but what happens if the person trips and falls on the chain?’ And he’d never thought of that.”

Promotion plays a big role in their success. Taylor says they spent $50,000 annually on print and radio ads before switching exclusively to Facebook marketing in 2018. It cost just $2,000 and attendance went up 15%. 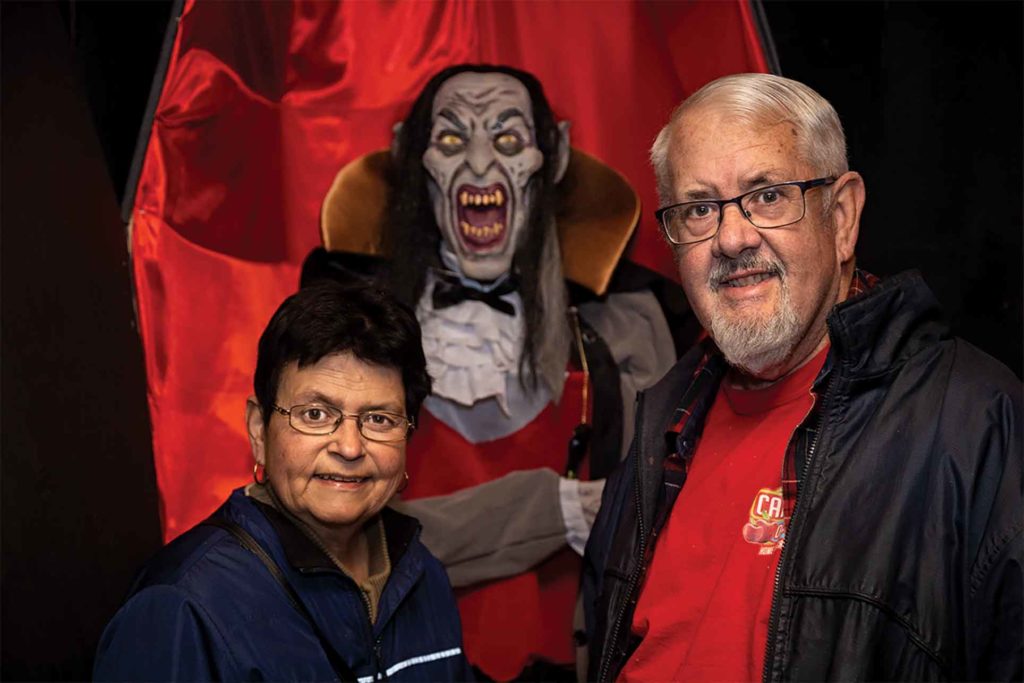 Claire and Dennis Taylor never dreamed their Halloween-themed attraction would be so popular; it attracts thousands of visitors to their eastern Ontario orchard from late September to Halloween.

Taylor wishes they’d known how popular Acres of Terror would become before they started. Its rapid growth forced them to cut down 1000 trees to create room for expanded parking and additional attractions. In retrospect, he’d leave additional room up front to start with. He could’ve always replanted the front area later if things hadn’t worked out.

The bottom line. Adding tourism attractions made a huge contribution to the orchard’s bottom line, Taylor says. It now generates more revenue to their bottom line than their apples, strawberries and pumpkins do. Their produce sales still generate substantial revenue, so they aren’t willing to give up that part of their operation. At the end of the day Acres of Terror allows them to generate additional revenue to invest into their farm.