Take Life by the Antlers

Take Life by the Antlers

Poppins the buck is herding his harem, bugling so every fellow fallow deer in Vermont can hear. To passers-by more accustomed to big whitetails, Poppins’ spotted khaki hide and waist-tall stature give him a fawn-like look, a good reminder of why fallow deer have long been petting zoo favorites. But there’s nothing cute or diminutive about his bold strut, pig-like grunting, and impressive antlers, each with a broad palm like a moose’s. Poppins is spoiling for a fight.

Nearby, a pair of males tussle for second-place status, their locking antlers cracking like baseball bats. Does in every shade of brown, from light cream to dark chocolate, barely glance their way.

Perfect fit. A few yards away, Hank Dimuzio takes it all in: the fighting bucks, Poppins’ show, the does arrayed around him, and the curious fawns wandering around 100 of LedgEnd Farm’s 272 acres of pasture and hay ground just outside Middlebury, Vermont. It’s a perfect New England fall day, and he’s surrounded by the perfect livestock to fit into the busy life of an emergency room doctor-slash-farmer.

“I’ve got an entrepreneurial spirit, so I wanted something that would be neat and adventurous,” Dimuzio says, counting off the factors that led him to start building his fallow deer herd back in 1994. “I needed something that would be compatible with being an ER physician, which is shift work. I’m not a bird person. And although I like goats, I couldn’t be here to milk goats twice a day.” 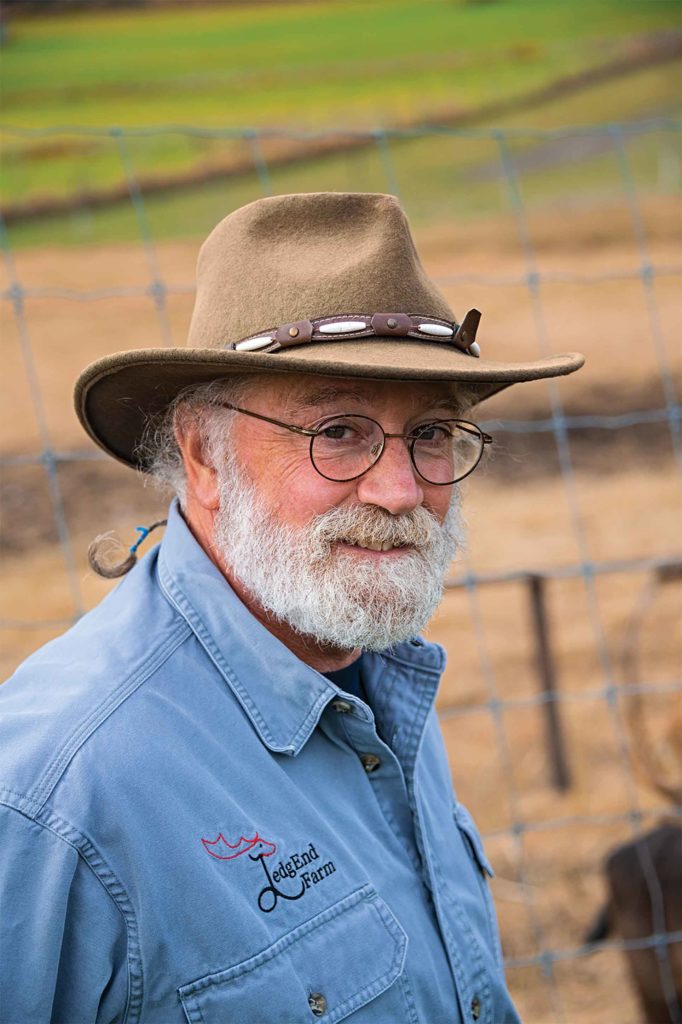 In 1994, Hank Dimuzio decided deer fit well with his other job: ER doctor. He and Rhonda Roberts just put half their farm into a perpetual farming easement with the Vermont Land Trust.

Minimal demands. Dimuzio notes that deer demand only minimal care most of the year.

“They’re a semi-domesticated species,” Dimuzio explains. “I try to raise them as they would be raised in the wild.

“They get tree trimmings, they get bark, which is a natural anti- parasitic, though I do some fecal testing just to make sure [parasites aren’t present]. Sometimes they get a de-wormer drench,” he adds.

Venison doesn’t marble like beef, Dimuzio points out, so there’s no need to finish them on grain.

“I’m basically a pasture-fed business,” he says. “We’ll use baleage for winter feed and shell corn for energy and to use as bait when we want to move the herd. They’ll consume about 2.5 quarts of water a day in the summer, and once the snow hits, they have minimal water requirements.”

LedgEnd Farm markets 100 to 120 animals a year, mostly to restaurants whose chefs appreciate the lean, mild, fine-grained venison and the lamb-sized cuts.

Mature does, culled or at the end of their reproductive years, yield 45 to 50 pounds of meat. Dimuzio slaughters bucks at 2.5 to 3.5 years—dressing out at 70 to 90 pounds—because yearlings, armed with nail-sharp spikes, are more dangerous to handle.

“I really do not like handling yearling animals,” Dimuzio says of his young bucks. “They’re nervous, they jump up and down, get skewered and die.” 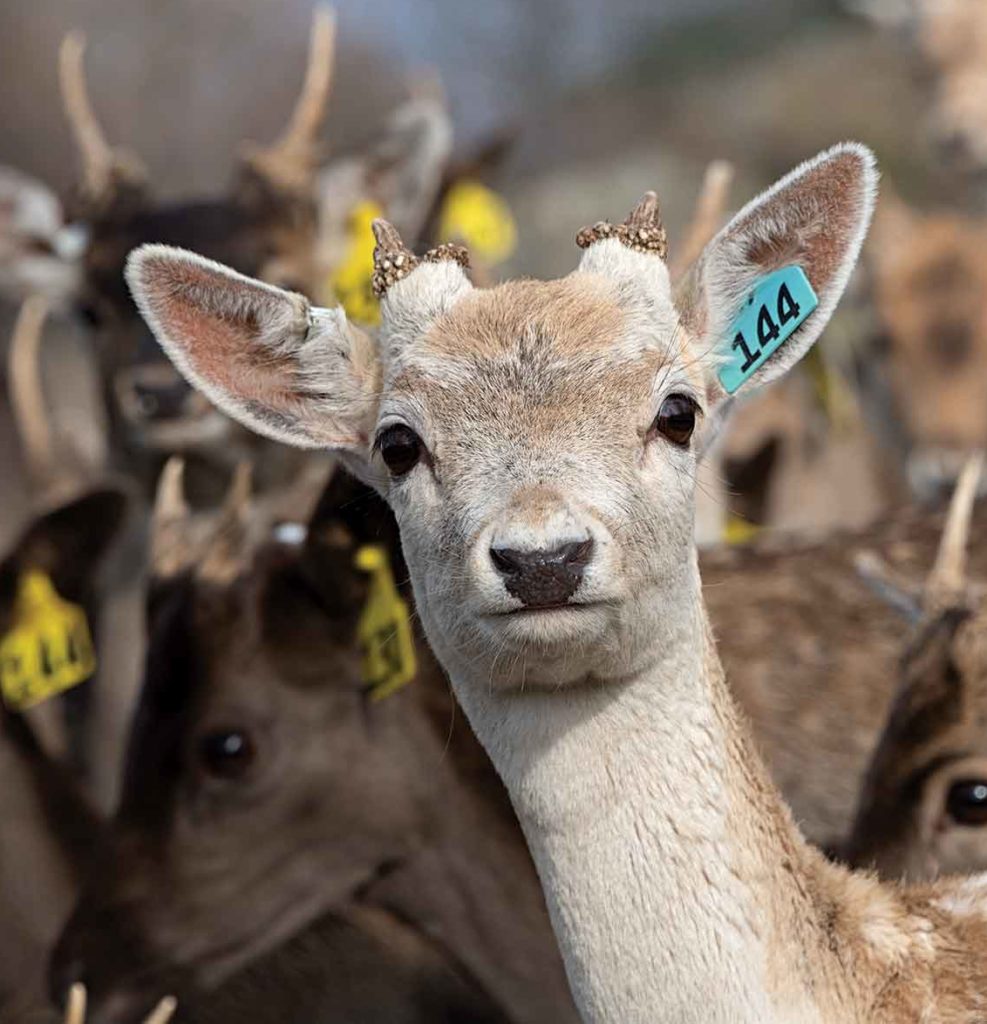 Fallow deer have been raised for meat in Europe and Asia for millennia.

It’s worthwhile to feed them longer on forage and a little corn, let them gain weight until they dress out at 70 to 100 pounds or so, and wait until they calm down.

Good fences. In the field, deer require a fence almost tight enough to hold water. One hundred acres of LedgEnd Farm is protected by tight-lock wire fencing that can’t be pushed apart.

“They’re a naturally curious animal, but they don’t really challenge the fence unless you’re pushing them,” Dimuzio says.

Vermont law requires deer farmers to install fencing at least eight feet tall, though fallow deer are unlikely to jump that high. Dimuzio’s bigger worry is that they will try to go under the barrier, so he leaves no more than an inch of clearance at the bottom.

The laneways leading to Dimuzio’s indoor squeeze chute and handling facility are another story. Those run along building walls or are flanked tightly by boards eight to ten feet high. The solid barriers help keep the deer calm and protect Dimuzio and his wife Rhonda Roberts from the head-high side kicks that fallow deer execute when they are nervous.

Vermont requires that antlers be removed before shipping deer in a group, a process that is quick and painless during the hard antler stage. Antlers become dog toys, and the slaughterhouse keeps the hides to help LedgEnd reduce its processing costs.

Price survey. Dimuzio conducts a price survey of imported venison and local organic lamb twice a year, adjusting his own prices to stay in the median, which tends to be about $27 per pound for boneless loin. Unlike producers of “amenable species” like beef, lamb, or even ostrich, deer owners must pay an extra $64 per hour themselves to cover inspection fees. “Venison is a high-dollar protein,” Dimuzio says. “It costs more to get the meat in the package.” 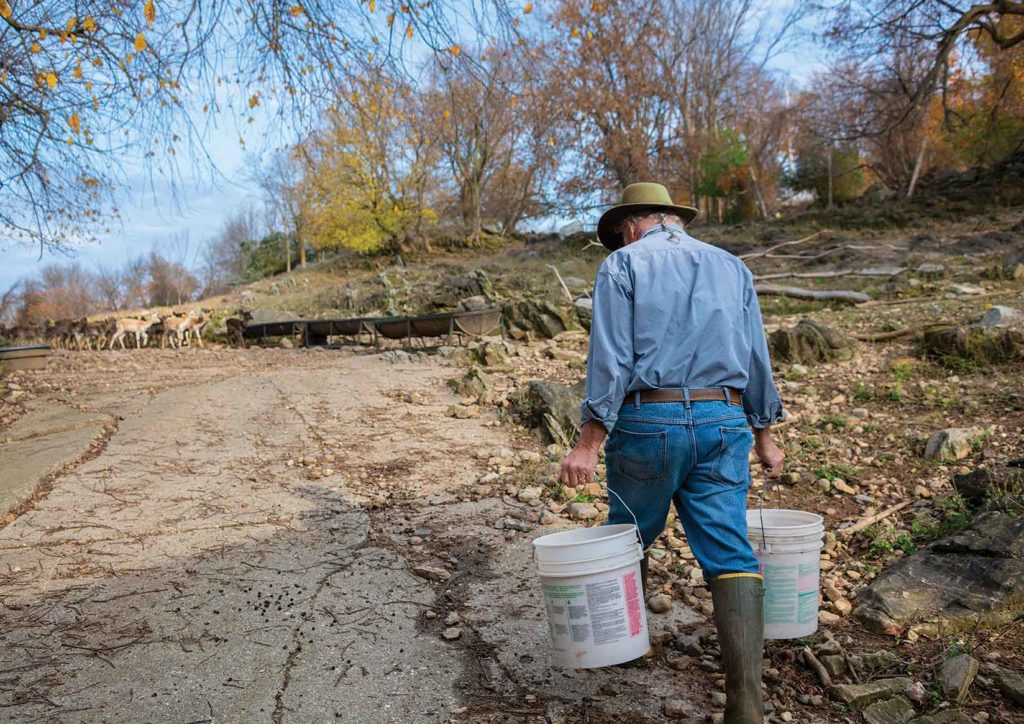 Fallow deer thrive on grazing and winter baleage, with a little energy boost from corn in the winter.

Dimuzio sells direct to restaurants, stores, and consumers. Otherwise, he says, distributors or shipping costs eat up the margins.

This year, with the abrupt close of restaurants and hotels, “we hit a brick wall March 15th,” he says. On-farm sales trickled in along with orders from local stores, but LedgEnd hunkered down.

The deer may be cute, but the deer business—with decades of price booms and busts, high turnover, and strict regulation by both agriculture and wildlife agencies— is anything but.

“Deer farming is kind of Old West style,” Dimuzio muses. “It’s not for the faint-hearted.”